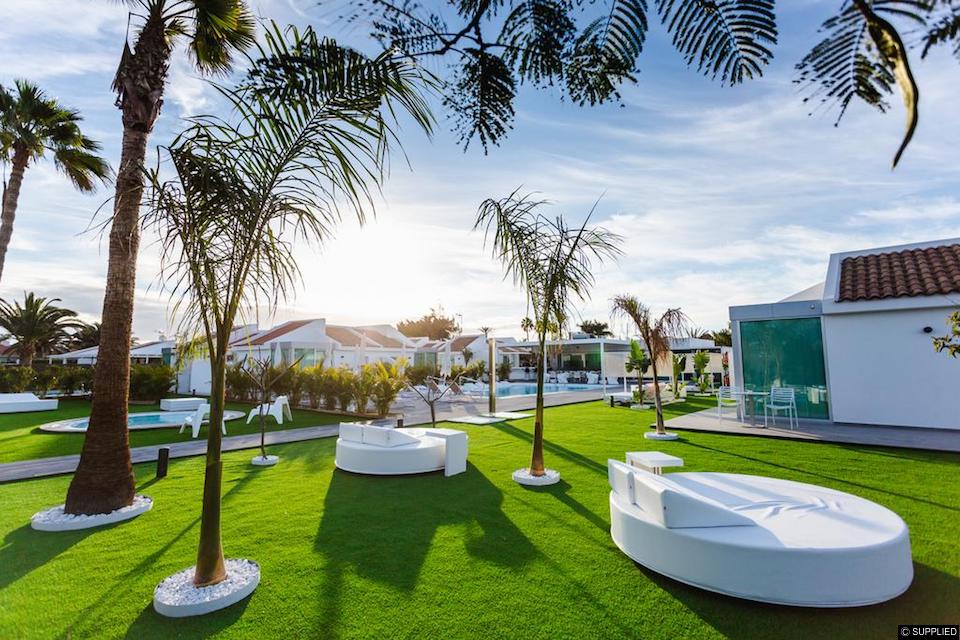 I shelved travelling to Gran Canaria for many years because I had horrors of being surrounded by youngsters on their first holiday along with every other restaurant serving a full English Breakfast.

I would have probably been close to that dread if it wasn’t for the tranquillity of The Seven Hotel & Wellness – Gay Only. After a comfortable 4 hour flight from London to Las Palmas airport (LPA), it was a smooth 25-minute drive to the area of Maspalomas.

When I arrived, I began to ponder the undeveloped surrounding areas and wondered where the ocean was hiding. All the rubble from the airport journey was left behind and forgotten about as soon as I walked through the resort doors and confronted with the dramatic backdrop of the island’s impressive mountains, endorsed by deep blue clear skies. This gay resort in Gran Canaria has perfectly set itself in a surprising picturesque landscape. You might find it a struggle to leave the grounds especially when you’re spoilt by attentive staff, spacious raindrop showers, 24hr access to the sauna, heated outdoor Jacuzzi, loungers inside the pool and of course temperatures reaching a steep 25 degrees (Nov ‘ 17).

With a somewhat struggle, I managed to pull myself away from the resort and took a 5-minute drive to the ever so talked about Yumbo Centre. The Yumbo Centre is not an area, it’s not a village, it’s not an attraction, it’s an exasperated outdoor shopping centre that looks as though it can’t be bothered. Don’t go searching for authentic Spanish food at Yumbo (or anywhere in the area), having spoken to some of the locals the general consensus is that they don’t have to improve Yumbo or renew the area as tourists settle for the wreck and continue to flock in and out each week. I wonder how many gay tourists would return to Yumbo Centre after leaving the island? So when it comes to choosing where to spend a few precious days on a winter break, food is almost as high in my priorities as sunshine. Not in a Michelin restaurant sort of way – but with local restaurants more in mind. Where can I eat well – and affordably?

After seeing what was on offer at Yumbo, I was extremely content with my dining option at Abora Restaurant a Dégustation experience every night in the good company of the staff, guests and the mountains all without the high prices that such an experience can fetch. The oceanfront lined restaurants in Meloneras was an eye opener for not settling on Yumbo as a gay hotspot Gran Canaria. The word of mouth – Restaurante Borneo was a high point of my trip, home cooked food with care and attention also where else in the world can you get kisses and hugs from the fantastic Chef.

All the gay bars are in the Yumbo Centre and opened every day with the majority of them starting to peak evidence of life past midnight. Many of the gay guests at The Seven Hotel opted to socialise at the resort bar, exchanging stories and laughs among gay travellers from Sweden, Italy, Germany, UK, Russia, France and USA.

For a real understanding of what makes Gran Canaria tick start by deciding if you want to retreat or not – whatever you choose it will be worth the trip and a Grand Canary-On!