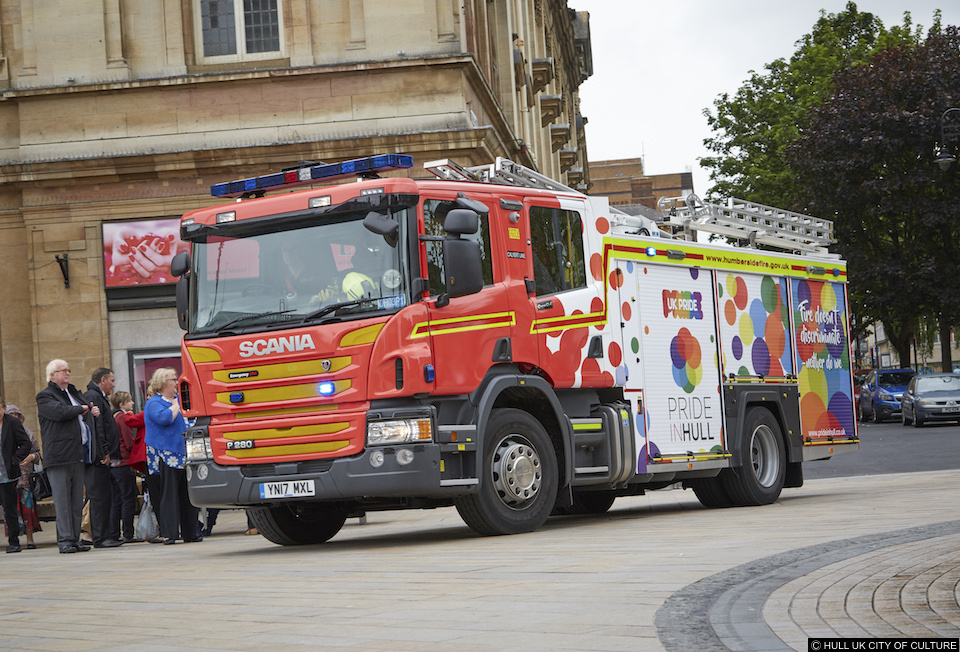 And that’s how to make a splash…

The new fire engine, which will be based at the city’s Calvert Lane is the result of the fire service working closely with LGBT advocates in Hull and is a celebration of Hull being chosen as the first ever host of UK Pride.

The engine features the slogan, ‘Fire doesn’t discriminate, neither do we’, the engine will be part of the service’s fleet until the end of the year.

Andy Train, co-chair of the UK Pride Organisers’ Network and Trustee of Pride in Hull, said,

“We have had a close working relationship with the fire service for many years, but this year we wanted to raise the bar and do something extra special.

“We hope that the eye-catching engine will get people talking. We know that many people have certain stereotypes in their mind when they think of LGBT people and people also have preconceived ideas about the fire service. We hope that this helps to break down both of those barriers.”

Hull UK City of Culture 2017 is also coordinating a huge programme of events across the arts to mark the 50th anniversary of the partial decriminalisation of homosexuality in the UK, under the banner of LGBT 50.

Chief Fire Officer Dene Sanders was delighted to launch the latest addition to the Service’s fleet, he said,

“We are really proud as a Service to work with the Pride in Hull team to add this engine to our already colourful fleet. We have moved on significantly as a service in equality and diversity, but there is still a long way to go within organisations such as ours and the wider community we serve. The very fact that we have an engine wrapped like this as we approach the LGBT 50 celebrations shows how much progress has been made. We look forward to a colourful summer showcasing the engine at events in Hull and beyond.”