INTERVIEW | Pravesh Kumar – Placing British Asian Drag in the Centre of the Stage. 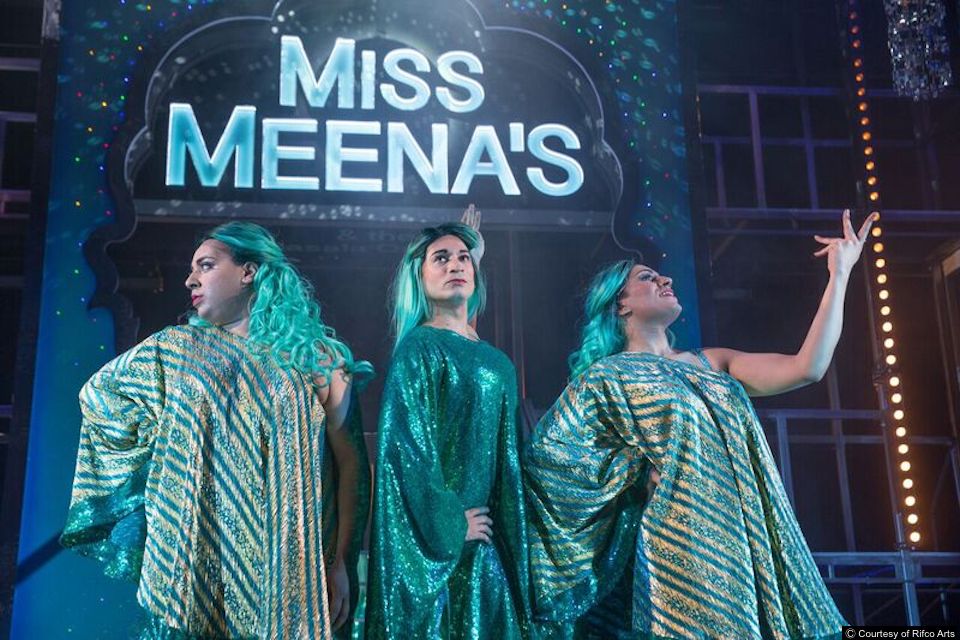 Kinky Boots, Priscilla Queen of the Desert and La Cage Aux Folles. There are plenty of shows out there which involve men dressing as women, but there is only one show out there that looks at the subject from a British Asian perspective; “Miss Meena and the Masala Queens”. Looking at the challenges loves, lives and families of British Asian drag queens, director Pravesh Kumar boldly takes a subject which is seldom spoken about amongst the Asian community and places it squarely in the centre of the stage. Pravesh spoke to TGUK about family, heart and sparkle, Bollywood and becoming “fishy”.

TGUK – Miss Meena and the Masala Queens is certainly unique; can you tell us about the show?

PK – Without giving too much of the story away, it is about Miss Meena, a once famous and fabulous drag queen, who has lost his sparkle and glitter and who is running a washed up and out of date club. The club is about to close until a new arrival brings back a glimmer of hope, but the arrival of another stranger leads to Miss Meena questioning everything that he ever stood for. It is a joyous show about celebrating diversity and individualism. It is a British Asian story with real heart and sparkle, and most importantly, it is a story which has never been told before.

TGUK – Was it a difficult show to get off the ground?

PK – It has been in my head for a while but I wanted to wait until we were really ready to tell it. The LGBT British Asian story is one which is very rarely told, and so it took a long time to get the backers to put their weight behind it. Shows such as these are often seen as niche or too risky, so it did take a while to get the production up and running. A lot of these types of productions end up in small studio theatres, but we are proud to say that we have placed this production on the main stages of theatres.

TGUK – How authentic are the stories you are telling?

Originally, the idea for the show came from the fact that I have really wanted to tell this story for a long time. As a gay man, I have been on the gay scene for many years, so from my point of view, it was a really important story for me to tell. Harvey Virdi (the writer) and I were really excited about both the concept and the project. It was a very even collaboration between the two of us, and we spent a year interviewing drag artists, and we very quickly realised what the story would be about. In short, it all comes back to family and the meaning of family. A lot of the artists that we spoke to were people who had been disowned by their families because of their sexuality, so from very early on, we knew that that family would have to be one of the central themes.

TGUK – How reflective of the British Asian community is the story?

PK – What is really interesting is that different communities are at different parts of their “gay evolution”; the British Gay Asian community is still at the very early stages. There are other people within the community who are like me, and who are out to their family and friends, but we found that most of the gay men we spoke to were not out to their families. Even though this is a story which is difficult to tell, what really came through in our research was that there are a lot of younger and middle-aged people in the British Asian gay community who were not in touch with their families because of their sexuality. The show does talk about what are often seen as very taboo subjects, and about the experiences of some of the British Asian gay community, but the tone is light enough to get the British Asian communities and the gay communities to engage. There are families coming to the show saying “I would never normally come and see this type of show, but thank you for telling this story”. It is important to be having the conversation about the issues raised in the play and we wanted to make sure that we did not shy away from the truth, and not cover it up. We were really keen to produce a show which played to more than just the converted, we wanted to produce a show which would play to an audience who wouldn’t normally come and see things like this. There is a large gay contingent in our audiences but also a very big Asian family audience coming to see it, so it is really opening up the issue of homosexuality and cross-dressing in the Asian community

TGUK – How did you involve the Gay community in your preparation for the piece?

PK – We initially did some work with a well-known British Asian drag queen, who really helped us to get into the Gay community and that led to this being a story which really does come from the heart of the community.  Whenever we do new writing, we try to make sure it is organic and truthful. We have to speak to the people whose story we are telling.  We were trying to find the real truth of the people who were kind enough to talk to us, not just to engage with them on a superficial level.

TGUK – There are a number of plays doing the rounds at the moment about drag or cross dressing, what makes Miss Meena different?

PK – It is a play about the human story behind the glam, and it is about people who just happen to be drag queens. It is an untold story of a community which is never really seen on theatre stages. Some of it is Bollywood drag, and that is really unique in itself, but it is more than that, it is also telling a story about something which is part of someone’s personality. The drag is not just cabaret; it is how the characters express themselves as individuals. Whilst the show is entertaining, the sequins and saris are not there just for entertainment or novelty value, it is an intrinsic part of the characters being portrayed.

TGUK – The show has a number of show stopping Bollywood moments, what do you think is the enduring appeal of Bollywood?

PK – Bollywood is larger than life, an over the top kind of effervescent musical format that most British Asians are in love with. It’s a really lovely way of expression – just about every drag queen that we saw were inspired by Bollywood Queens. Bollywood is just so colourful, glamorous and sparkly.

TGUK – Were you tempted to use live singing rather than lip-synching in the show?

PK – we wanted to stick with the lip syncing, as all of the British Asian drag queens lip-synch – that’s the reality. Whilst the cast of the show can all sing, we wanted to be true to the story we were telling. The musical numbers really are a hugely entertaining and were great fun to put together.

PK – I think that there is. Western drag queens often camp up their performances, but with the British Asian scene, the guys are female impersonators, so I think that there is a big difference between British drag and British Asian drag. British Asian drag queens present themselves as essentially female impersonators; they present themselves as being very beautiful, very decadent and inspired by Bollywood, they are not going for the “man in female clothes” look, the parody of people in the public eye or the comedic element of drag, they are trying to look as “fishy” as possible, which is the British Asian drag term for looking as feminine as they possibly can.

TGUK – Can you sum up the play in three words?

PK  – I would have to say heartfelt, funny and sparkly.

Miss Meena and the Masala Queens is playing at West Yorkshire Playhouse, Leeds from the 13th to the 17th June 2017. For details and tickets, visit www.wyp.org.uk .