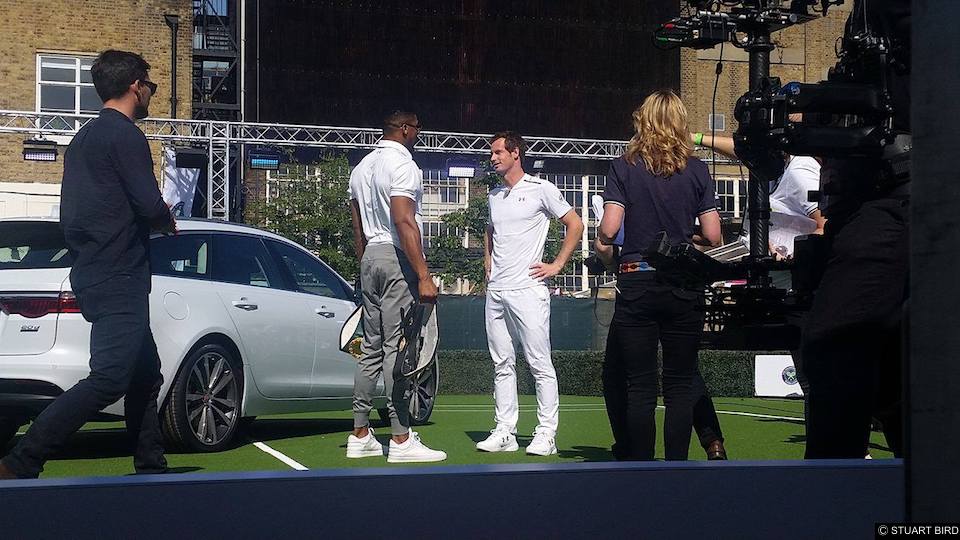 A hot sunny day in June saw the launch of Jaguar’s new XF Sportbrake released to the world via the internet and to journalists from the motoring and sports worlds in the Brick Lane area of London.

Tennis was very much the theme for the launch of Jaguar’s much awaited Sporting estate car that completes the XF range well. And just in time for its official use during Wimbledon in just a few weeks time. For the third time running, Jaguar is this year’s car of choice providing XF Sportbrake, XF, XJ and F-PACE. Try and keep count. Expect to see a lot of luxury with 170 cars on loan.

Ian Callum, Head of Jaguar Design was there to give a brief over the cars’ new design and importance. Meanwhile, Nick Collins was informing us about the great sale success Jaguar are having at the moment with sales doubling within the last year. There are some exciting times to come from Jaguar. The black cat is on the prowl.

The lovely Clare Balding started off proceedings introducing the car with the help of the ball boys and girls lifting the covers across a makeshift tennis court. This revealed the stunning looking new car in the only fitting colour, white.

Britain’s tennis number 1 Andy Murray and boxing champion Anthony Joshua demonstrated the 1700 litre boot with their trophies. Those boxers belts are not small by any stretch of the imagination. And from June 15th to July 2nd, Andy’s trophy will be travelling around the country in the XF Sportbrake. Andy Murray himself said, “Letting go of the trophy will be difficult, but there’s no better vehicle than the Jaguar XF Sportbrake to take it on this UK tour. I’m pleased that people are going to be able to get up close to the trophy when it visits schools and tennis clubs, and hopefully, it might encourage people to pick up a racket this Summer.”

Proceedings continued with strawberries and cream and a tennis match between the sporting stars and Jimmy Carr and Rob Brydon. To make it fairer it was evenly matched with sports star and comedian pairings. Commentary being done by Clare and Tim Henman.

Many new and innovative features are to be found on the new XF. Cabin Air Ionisation gives you and your family clean air, Gesture Control lets you operate the panoramic sun blind or open the boot when your arms are full of kit, forget the keyring and swim, surf, cycle or run with an activity key. And to help with the lifestyle the new XF comes with a handy two-tonne towing capacity lets you take the trailer, boat, jet ski or horse box

THEGAYUK hope to get a first-hand experience of the new XF Sportbrake as and when they become available to the press. The car did pretty much go into production during the launch. so watch this space. Prices start from £34,910.