Man arrested in Dubai for touching another man’s hip 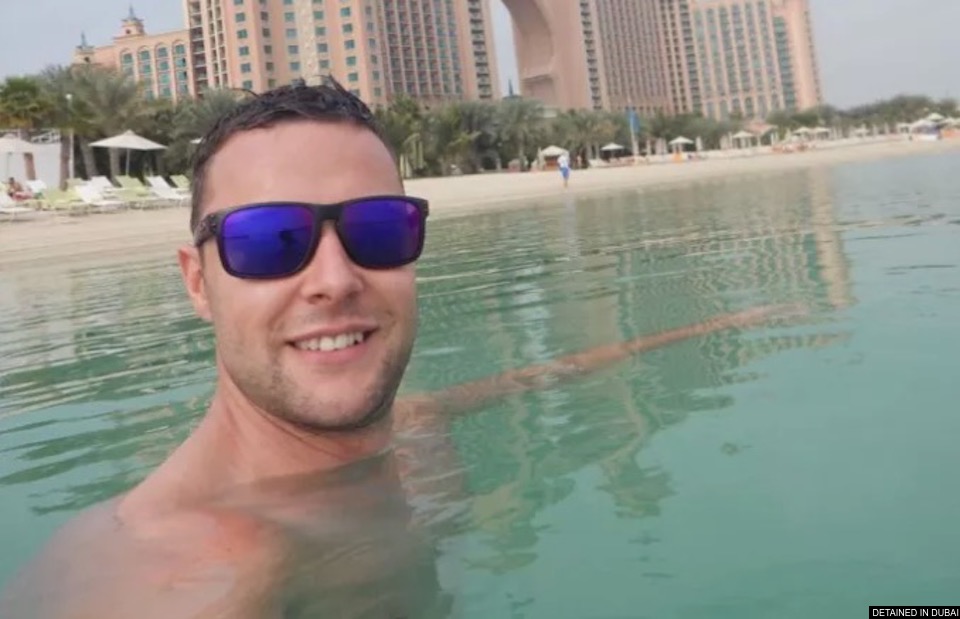 A man is facing financial ruin after being arrested and detained in Dubai following a misunderstanding.

A Scottish man has been arrested and detained in Dubai after falling foul of Dubai’s strict public decency laws. According to DetainedInDubai.org, Jamie Harron was arrested after touching the hip of another man in a crowded bar.

Jamie was in Dubai, with a friend, on a two-day stopover from Afghanistan, where he works as an electrician.

Jamie, originally from Stirling in Central Scotland, says he was trying to ensure that a drink he was holding did not spill on himself or others. He touched the other man’s hip in order to avoid an impact.

He was arrested for public indecency and his passport was seized but authorities. In fighting his case, Jamie has spent in excess of £30,000 in legal fees. He has spent all of his savings and spent £12,000 on credit cards.

A misunderstanding that has cost him the earth

According to DetainedInDubai, after Jamie had purchased his drink in at the Rock Bottom Bar in Dubai, he noticed a Jordanian man who was looking over at him from the edge of the dance floor in a confrontational manner.

In order to get to the other side of the bar, Jamie had to pass the man and in doing so, placed his hand on the right-hand side of the man’s hip top to ensure that when passing they didn’t bump and spill drinks in a move familiar to most UK patrons of crowded pubs. There was no intention to upset the man in any way. The man said nothing and didn’t show any reaction.

Jamie and his friend relaxed for another 20-30 minutes chatting when suddenly, the police appeared outside the bar. The man went out to meet them, and he began animatedly talking with them, pointing at Jamie. Jamie got up and went to see what the problem was.

The man, his friends and the police were all speaking in Arabic. The accuser occasionally shouting in English, “he’s been drinking, and he touched me improperly, I will get you deported, do you know who I am?”

The police asked Jamie to apologise which he gladly did to the man. The man was not mollified and urged the police to arrest Jamie; Jamie was arrested and in and out of jail for the next 8 days with no idea of the charge. He was held in the Al Barsha prison, where he was allegedly prohibited to wash or brush his teeth.

It was only after a meeting with a  prosecutor that Jamie learned that charges against him were twofold, drinking alcohol and “public Indecency.” Jamie denies this latter charge vehemently, restating that his only intention was to avoid spilling a drink.

Radha Stirling, CEO of Detained In Dubai, the British based NGO who is leading the campaign to help Jamie, released the following statement: “I have spoken to Jamie today who is under immense pressure and stress. He was expecting to appear in court this Sunday, the 6th of October but the court moved the date without telling him or his lawyer. This led to a sentence of 30 days imprisonment for failing to present himself at the hearing”.

Jamie said in a phone call to Stirling “Of course if I had known there was a change in the court date, I would have been there. I have been waiting for months to appear and now it looks as though I will be arrested when I go to the hearing on Sunday. It is completely unfair and I can’t understand how I can be sentenced for failing to appear when I was not even informed of the hearing”.

Ms Stirling continued, “Jamie has been advised by his lawyer that he is at high risk of being jailed for a duration of up to three years. It is quite outrageous that he has been held in the country for so long already. This is another example of how vulnerable tourists are to arrest and detention in Dubai and at how drawn out and disorganised legal proceedings are.

“We have received a wave of new cases of British nationals detained in Dubai and the Foreign and Commonwealth Office need to increase travel warnings to citizens intending to visit or live in the country. If Jamie is sentenced to prison, he faces human rights violations and torture. The English High Court has ruled against extradition to the UAE based on the ‘very real risk of unfair trials and torture’ but the UK government has refused to increase warnings, largely due to their financial and diplomatic ties with the UAE”.

Tourists who consume alcohol at licensed venues can still be arrested for having alcohol in their system; Most tourists are not aware of this fact. A number of British nationals have been caught out by this contradictory application of the law.

Both Jamie and his family are anxious for him to be back home in Stirling, Scotland as soon as possible.