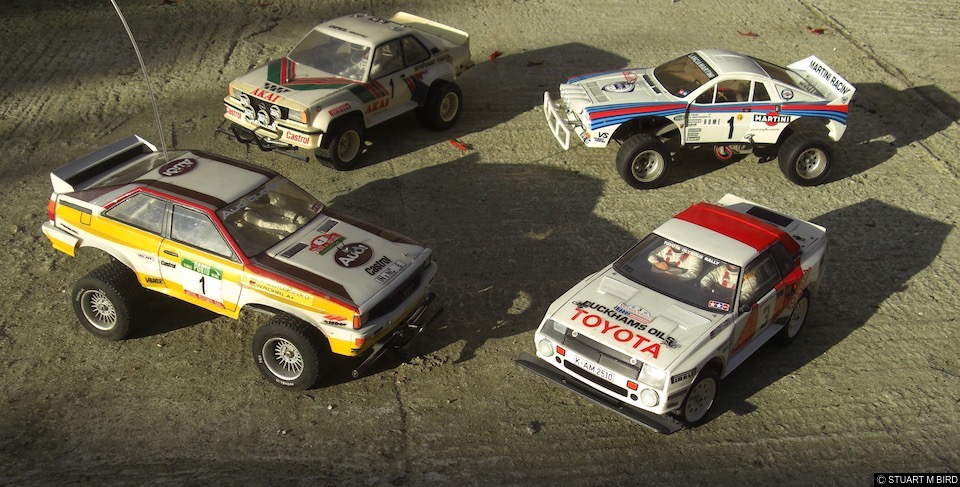 Group B rally cars were fearful monsters of rallying when you had formula 1 power raging through the woods and villages all over the world. A succession of accidents finally killed the Group B section of the sport off with the final blow coming in with the tragic death of Henri Toivonen driving a Lancia Delta S4 on the 2nd May 1986.

During the heydey of Group B, radio controlled manufacturers were quick to monopolise on the consumers’ lust for Group B machinery and no company did a better (or worse) job than the Tamiya plastic corporation.

Over the years of 1983 to 1987 and starting with model number 58036 and the launch of the game changer in rallying, Tamiya released the Audi Quattro in July 1983. In total Tamiya released 4 group B rally cars. So pull your aerials up and charge your racing packs as I run you through these four classic gems. I’ve also included links to the Tamiya videos on Youtube.

This was quite a fitting replica of the car it displayed. Like the original, Tamiya’s Quattro was also heavy. This was the companies third attempt at making an off-road chassis. In making it a true off roader with the ability to withstand true rallying abuse, the delicate electronics were all encased in a water tight tub. Great you might be thinking but the SRB chassis of the Sand Scorcher et al was much better at this and it also had proper go-anywhere suspension.

Tamiya endowed the Quattro with swing arm front and trailing link rear axle with suspended transaxle. This encased a clutch system that never slipped because you could’t put any more power through it other than the Mabuchi RS 540 motor. Tamiya said it was powerful. We who drove the car back in the 80’s begged to differ. The advert that played on a loop in Beatties toy shops sold us a fat bloody lie! It didn’t have 4 wheel drive and due to its lack of get up and go, it didn’t need it either.

All this was not damped in anyway by coil springs only all round. For want of a better word, the rears were adjustable depending on road surface. It was a crude make do system of adjusting a collar.

The box chassis was limited to its surface choices. Most off-road tracks other than mild dust would render the vehicle stuck in the mud. On bumpy ground it was truly horrendous by the way it bounced around like an excited 4 month old puppy. The body coming off its rear clip system was common.

It wasn’t very good at being an off road rally car. Unlike the Audi, this effort from Tamiya wasn’t going to win any races. In fact I don’t remember anyone in my local park winning with a Quattro!

Where it did wonders was with the body and the details. Tamiya still are the kings of details. Now forgiving it the elongated front wheel arches and squashed body (it actually looked more like the Sport Quattro S1) it was a delight to detail with a complicated decal set of Audi Quattro colours. It even had the option of fitting the 6 spotlights to the front. The tyres were road going life like Michelin TRX’s that never seemed to wear out. This was also the only Tamiya to be piloted by a woman and to celebrate this Tamiya even made a new mould for the little driver included that was to be Michèle Mouton.

Hot on the heels of the Quattro was the next release, the Opel Ascona.

Again this had the awful box chassis with no off road ability but stranger still was the decal livery of the lesser known Akai team Ascona when Rothmans Racing was more dominant on the rally scene. It took me several years many moons ago to even find a picture of the Akai car.

They chose Walter Röhrl as their driver of choice for this model but with no name mentioned on the side. Walter and Opel took second place in the manufactures trophy being beaten by Audi.

That may have been a result to Audi but to the model builder Opel had the last laugh. The body for the Ascona was and still is one of the nicest to look at. It is far better proportioned than the Quattro.

This car has been cruelly quoted as Tamiya’s third truck. That’s not fair you say when you handle the lovely styrene injection moulded body. You can even wire up the front and rear lights and for added joy, the 4 spots on the front can also be illuminated.

You spend ages on the body. It’s a thing of beauty with detail and apart from the rather large wheel arches, it all looks quite smart. Even the tyres are those lovely Michelin TRX types as fitted to the Quattro and Ascona.

You then mount the body onto the chassis and stand back aghast at the true truck like stance this elegant coupe has. The body sits high on the new space frame chassis. The wheels protrude the width of the vehicle and it all looks a bit comical.

The chassis really was an upgrade though. Tamiya had done a lot of development in making this a proper off-roader. It spawned the much-loved Frog. The Frog had hop up parts like oil filled rear shock absorbers and a differential as standard. The basic chassis has never been out of production since 1983’s release as the Subaru Brat. Out of the box the Lancia came with coil springs and a solid rear diff which made off roading great but wet corners interesting. Everything was suspended individually and despite its light weight design, this was one indestructible chassis. There was also a belly pan available and other people made upgrade kits for various bits.

What it did was go fast when you changed the Mabuchi RS 380S motor to the RS 540 or better still one of the hotter motors Tamiya offered. The Lancia was a true weapon compared to the other two now lame ducks fighting for a slow and steady finish. What it also did with speed was to disintegrate that elegant body into a thousand pieces. The chassis might be rally tough, however, the body is quite like a real Lancia with the ability to shed bits here and there. One wrong turn and you’re reaching for the gaffer tape to put it back together.

Tamiya did re-release the shell mounted to a better TA03RS chassis and while they were at it they also amended their wheel arch faux pas. It wasn’t a patch on the original.

Like Group B itself, this was to be Tamiya’s swan song to the rally with this technically advanced if somewhat flawed Toyota Celica. This was a violently fast machine.

The scale was not like the others. This was 1/12th scale. The others were all 1/10th. This made the Celica a more delicate creature but my word what a chassis. If you liked scaled precision then this was for you. A mid mounted Technigold motor that in itself would look great next to the Queen’s crown jewels. It also had adjustable timing. Drive was transmitted through 3 differentials to the 4 wheel drive layout.

The suspension was also a work of art. Adjustable rear suspension for 3 handling characteristics and 3 different damper rates and double wishbones and an anti-roll bar at the front. It sounded great. It read fantastically. You assembled the kit with joy. You then discovered the oil filled shocks were the worst in the world and would leak oil, the rear wishbone mounts for the shock absorbers would break and that Technigold motor would strip the cog that fed the rear gearbox. It might have worn a Toyota badge but it lacked every ounce of Toyota reliability.

On and sort of off road it was a hoot. Very fast and if it stayed in 4WD, it would keep up with most things in a straight line. It’s cornering prowess with off-road or tarmac tyres left a lot to be desired. I did race one for a while at Crystal Palace with no wins to my name but only a handful of retirements. It certainly gave you sweaty palms.

Oh well, there is always the body. And this was again a delight to make with details galore. This was one of the last where you had to paint all the bits. Soon after they started using stickers for most of the details. The fine art was about to be lost but in the mean time, you didn’t know this so you enjoyed the painstaking HOURS it took to paint not just the shell but also the 2 drivers in the blow moulded cockpit.

Soon after they started using stickers for most of the details. The fine art was about to be lost but in the mean time, you didn’t know this so you enjoyed the painstaking HOURS it took to paint not just the shell but also the 2 drivers in the blow moulded cockpit.

The old Tamiya stuff is still the best. With nostalgia so ingrained in us and with a crazy support of radio controlled clubs out there you can’t not get the support or parts you need to buy to maintain and enjoy any one of these group B monsters. For my money I’d have to go for the… all 4 of them. The Quattro and Ascona have beautiful drivetrains that make for a beautiful sound. The Lancia is a gem of detail even if it does look like a truck and the Celica has a chassis made of fine architecture l could just lick.