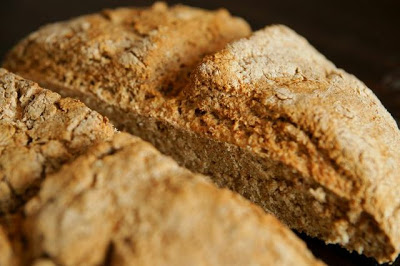 The first known recipe for Traditional Irish Soda Bread dates back to 1836 which appeared in the Newry Telegraph which read:

“…put a pound and a half of good wheaten meal into a large bowl, mix with it two teaspoonfuls of finely-powdered salt and a large teaspoonful of super-carbonate of soda. Add it to the meal, rub up all intimately together, then pour into the bowl with as much very sour buttermilk as will make the whole into soft dough. Form it into a cake of about an inch thickness, and put it into a flat Dutch oven or frying-pan, with some metallic cover, such as an oven-lid or griddle. Apply a moderate heat underneath for twenty minutes, then lay some clear live coals upon the lid, and keep it so for half an hour longer”.

We have come along way since 1836! Here is my modern adaptation of a Traditional Irish Soda bread for the modern cook. As you can see, the only real difference is the use of an oven but feel free to give the other method a try! You will never taste a better soda bread than the taste of your own Irish Soda Bread so enjoy every slice.

1. Preheat the oven to 230°C Gas Mark 8. Sieve the plain white flour, bread soda, and salt into wide deep bowl. Add in the wholemeal flour and rub in the butter. Make a well in the centre and gently pour in the buttermilk, mixing to form a dough with one hand. Note: The dough should be soft but not sticky.

2. Shape the dough into a round 2 inches thick and turn onto a floured baking tray. Make a deep cross in the top of the dough about two-thirds of the way through. With the tip of a sharp knife, stab each of the quarters of the dough to ‘let the fairies out’.

4. The bread is done when you tap the back of the loaf and it sounds hollow. Allow to cool on a wire rack before slicing and serving with a generous dollop of butter and jam.

– A real tell tale sign that there is too much bread soda in the mix is if the inside of your bread green in appearance.

– Timings vary according to each oven, the soda bread should be golden brown in colour and hallow when tapped with your knuckle (the timings above are only a rough guideline).

– Flours vary too which is why the buttermilk guideline above is so broad. The mixture should not be sloppy, it should be nice and firm. Do not over work your dough as it will make your bread too tough.