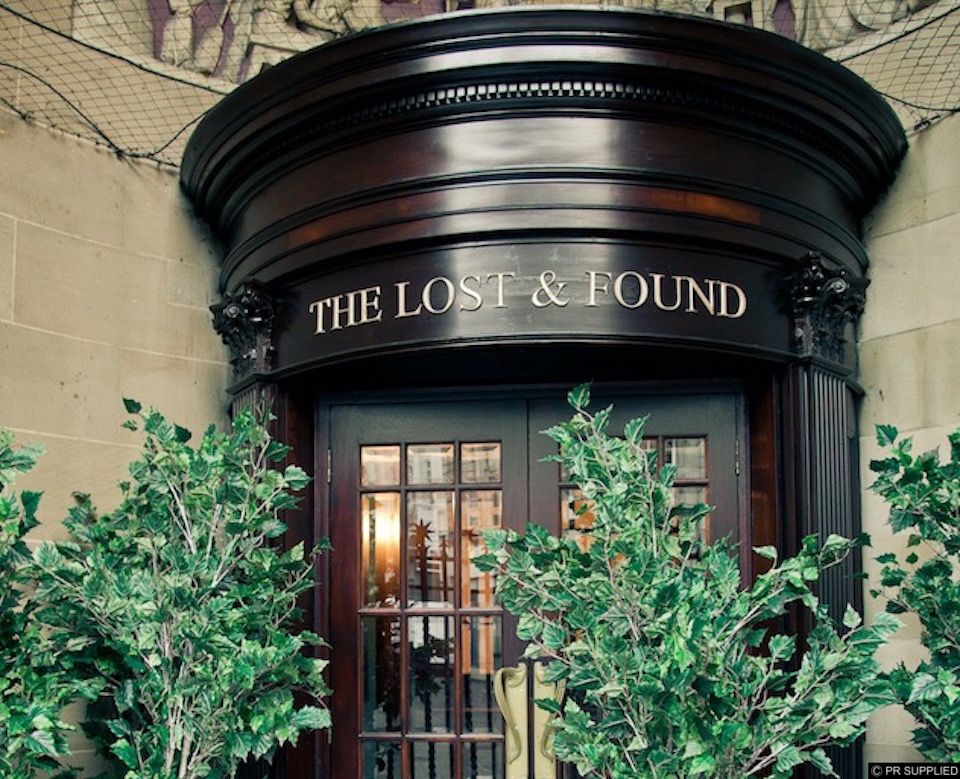 The Lost & Found recently refurbed the whole of bar and restaurant area, and when I entered, there was a lot to catch the eye.

When I arrived, Jack offered us a friendly reception and took me round to see the new Bookcase bar. He also explained how it is for private hire. The upstairs terrace bar was a stunning new addition where folks could a have drink without needing to book. This is named The Gallery which is adorned with leaves etched into the ceiling.

Jack showed us to our table and I had a great view of the whole bar. The bar has changed its position towards the back creating more room for diners and drinkers to take a more centre-stage. I also noticed more room between tables, so there is more of intimate feel with each party. The cosy, Victorian feeling never left.

I cannot help but get excited when I think of the cocktails we had. My first drink was TO BETTY’S FOR TEA containing Masons Dry Yorkshire Gin – Tea Edition, Briottet Crème de Bergamote, Teapot bitters, Egg white, Lemon juice & sugar syrup, Milk & cream (£8.95). Served with a chocolate digestive, said the menu, but I think they ran out of chocolate ones today, but it’s just as well I like plain digestives too. This was a feast for the eyes as well as for the palate – it was like drinking cheesecake. Dunking my digestive was definitely a good shout, thanks Jack! My lady friend, Danni put my manlihood to shame with her OLD FASHIONED cocktail, persisting of Bourbon/Rye whiskey/Rum of your choice, Angostura bitters, Orange peel, Maple syrup (£8.95). She said the advice for sweet whiskey was a good one. She must have liked it, she ordered it twice!

For starters, I had the SMOKED SALMON gin & tonic pickled cucumber, lemon cream cheese and malted brown bloomer (£8.50), and Danni had the LIGHTLY DUSTED SQUID Asian slaw, sriracha mayonnaise and charred lemon (£7.50). My salmon was a work of art – colourful, symmetrical, and so much fun. Though petite in size, it sure satisfied the first bouts of hunger; while my friend’s starter was a mixed bag. The portion was very generous, and I had to help her finish – this is not a bad thing! However, as much as the salad was scrumptious, the squid was very tough and rubbery resembling mini boxing gloves. It was hard to cut and chew; don’t know if it was an old animal or overcooked? A small shame as the rest of the dish was dreamy.

We both opted for steak mains. I had 8oz FILLET served with confit tomato and your choice of peppercorn sauce, Béarnaise sauce or garlic butter (£24.00). I went with peppercorn sauce as I always do, and a side of Fried potatoes, garlic mayonnaise & rosemary (£3.50) while Danni had the 8oz SIRLOIN STEAK served with confit tomato with garlic butter (£18.00) and a of Blistered green beans, chilli, garlic & sesame seeds (£3.50). Both steaks delivered in flavour and presentation, and it had us feeling very full by the end. The fried potatoes were very moreish too. But, there is always room for pudding, is there not? Jack described some dessert options and warned they are not what you would expect. True he was. EARL GREY PANNA COTTA with blackberries and mini shortbread biscuits (£7.00) was a delicious, neat pudding. Small portion but it was accompanied by a very tasty and citrusy cocktail called Haymans Old Tom Gin for an extra £3. However, the star of the show was Danni’s MILLIONAIRE’S SHORTBREAD with dark chocolate, sticky whisky caramel, honeycomb and a rich chocolate ice cream shortcake (£8.00), it was a field day for the senses. I use the field pun unashamedly since the dessert resembled a wild brook. It was beautiful to look at and very tasty too.

Meanwhile. my second cocktail was a palate-boggler, still not sure what to make of it; it was called SANTIAGO SWIZZLER, containing QuiQuiRiQui Matatlan Mezcal Espadin, Velvet Falernum, Briottet Crème de Mûre, Damson plum jam, Plum bitters and Lime juice (£8.50). I didn’t recognise many of the ingredients, but I took a gamble. Danni didn’t like the taste of it, and I asked Jack about it who said it is a very popular drink during Christmas time, but almost extinct from the menu. I don’t think I would have it again, yet intrigued by its eclectic bursts of flavours and colours.

What I always love about The Lost & Found is the atmosphere- the music was on point with the swing-style beats. The service is always on point and overall the food was delicious, fun and unexpected, with minor errors in cooking with one dish.