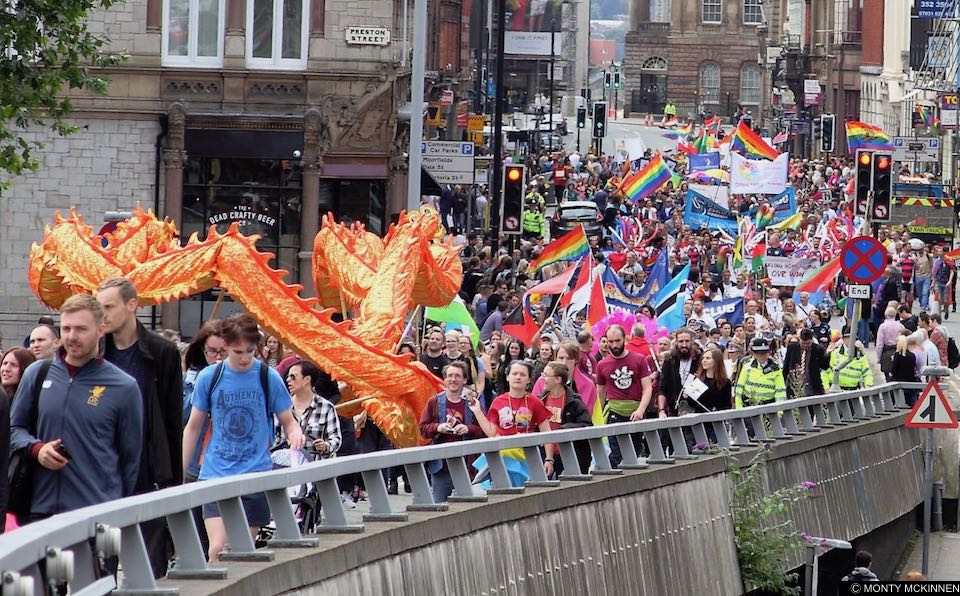 As the LGBT+ Pride season draws to a close in the UK, six Pride organisations have thrown their hat into the ring to host UK Pride in 2018.

The first UK Pride took place at Pride in Hull in July. The event saw a huge increase in attendee numbers, and visitors from across the UK. Licensed by the UK Pride Organisers Network (UKPON), UK Pride is the national equivalent of EuroPride and WorldPride.

Exeter Pride, Folkestone Pride, Isle of Wight Pride, Liverpool Pride, Preston Pride, and Pride Cymru have all announced that they will bid for UK Pride 2018 at UKPON’s annual conference in Blackpool later this month.

Co-Chair of UKPON, Andy Train, who is also Vice-Chair of Pride in Hull, said:

“At Pride in Hull we were delighted to have the honour of hosting the first UK Pride earlier this year, and it’s a tribute to the impact it had on our Pride to see six Prides bidding for next year’s event. The Pride movement is growing across the UK and we had more than 20 brand new Prides this year. UK Pride helps to create a focal point for one Pride each year, to help increase visibility and awareness.”

“UK Pride status is a unique opportunity and uplift for any Pride. I wish all six Prides all the very best of luck, and I can’t wait to see their bids,” said Mr Train, who is also the Regional Director for the UK for InterPride, the international Pride organisers association.

All organisers of Pride events in the UK are entitled to be members of UKPON, and each Pride organisation has one vote at the Conference.

“Exeter Pride hopes that winning UK Pride will help us to increase LGBTQ+ visibility not just on one day but all year. 2018 is our tenth anniversary year and the perfect time to consider how far we have come both as a movement and a city. We work closely with cultural partners and local businesses, and hope that becoming UK Pride will help us not only to celebrate diversity but also to honour the city that we are so proud of!”

“After being warned to not expect attendance of more than 100 people, over 800 came to support Folkestone’s first Pride.  Folkestone has one of the highest pro-rata LGBT+ populations in South East England, yet no real LGBT+ community.  Folkestone Pride has started to change that. UK Pride status would give us the platform to evoke real change in our diverse, creative and historic community. We are the only town applying but we have just as much to offer as a city!”

“A year in which the MP called gay people ‘dangerous to society’, prominent homophobic columns appeared in the local press and a Councillor suggested banning homosexuals from public toilets, 2017 saw the inaugural Isle of Wight Pride, uniquely taking place on a beach with thousands turning out in support. UK Pride status will enable the Island to build on this success and create a major celebration of diversity and inclusivity, showing the rest of the UK what an amazing place it is.”

“2018 is a big year: ten years since Liverpool was European Capital of Culture and also ten years since local lad, Michael Causer was murdered in a homophobic attack, resulting in what is now Liverpool Pride. Whilst we have much to celebrate as a vibrant and diverse city, we still have to fight to tackle hate crime, ensuring attacks like the one on Michael, and so many others, never happen again in Liverpool, across the UK or around the world.”

“Pride Cymru is bidding to host UK Pride because we believe that we are best placed to highlight how the regions outside of London, Manchester, Brighton and Birmingham are able to unite the LGBT+ communities, whilst forging and strengthening the bonds that tie society together.  We firmly believe that we are stronger when reach out to those that are least represented and believe the great work done by regional Prides are overlooked and would benefit from wider UK recognition.”

Each Pride will have just fifteen minutes to present their bid, and all are being invited to publish their bids online so that people can view them in advance.

The winning Pride will be announced at approx 1500 on Sunday 22nd October, and will be livestreamed on Facebook.