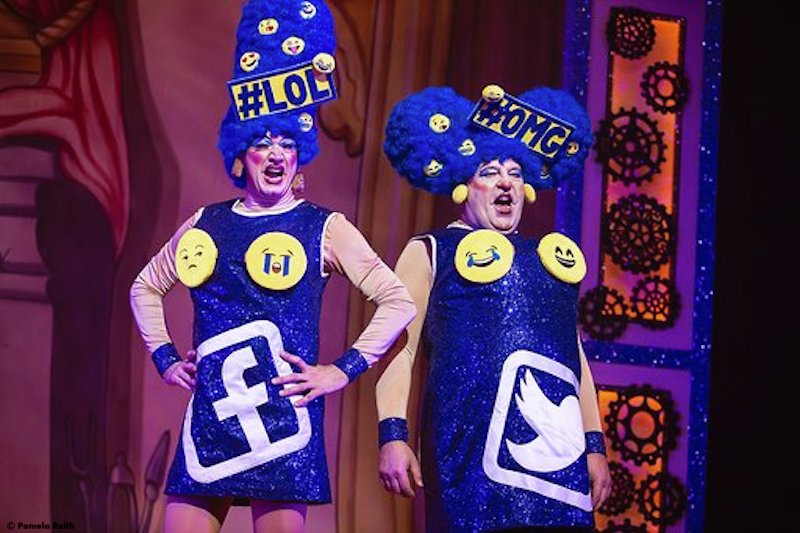 If there is one thing that is sure to herald Christmas out there in theatre land it is the arrival of the traditional panto, and whilst many may immediately turn to thoughts of screaming children and D-list celebrities, there is a surprising amount of fun to be had at your local theatre this festive season.

Whilst this review will be of Cinderella at Sheffield Theatres, it would probably extrapolate to theatres up and down the country. As South Pacific so ably put it, “There is Nothing Like A Dame”, and this year’s offering sees the return of panto dame, Damian Williams (Benidorm Live!) camping his way across the stage as Donaldina, one of the ugly sisters, ably partner by Matt Daines as Melina the other (somewhat) uglier one. This alone should start you thinking that the jokes here are not just for the kids, as a whole host of political figures come in for a ribbing – but none quite hit the topical shock value as much as one gag involving a prince sweating; and there’s the groaner jokes, the laugh out loud jokes and the saucy ones which fly straight over the kids heads nestled amongst the furore.

Joanne Clifton plays on her Strictly status as the fairy godmother. TV’s Mister Maker (looking surprisingly like Robbie Williams) keeps the kids happy, and even Paul O’Grady makes a surprise appearance as fairy. Need we say more? Still not convinced? How about throwing in a young Zac Efron looking Prince Charming and a handful of handsome backing dancers to add to the camptastic value of it all?

There is a host of musical numbers scattered around the production, this year including songs from other musicals such as The Greatest Showman and Everybody’s Talking about Jamie; whilst a smattering of pop songs (Ed Sheeran, Adele and Beyoncé) all add to the fun. We’d be lying if we said that there wasn’t any screaming kids at the show, but, hey, that is all part of it; and if you let yourself get carried away in the spirit of things, you’ll soon be shouting out, groaning, booing, singing and laughing out loud along with the best of them.

It’s loud, bold, crass and kitsch, and it is difficult to know who enjoyed themselves more – my 11 year old nephew, or me; but either way, we had an absolute blast, leaving the theatre with a massive grin, with sides aching from laughter and with the firm opinion that panto is not just for kids.

Cinderella is playing at Sheffield Theatres until 5th January 2020; but check out your local theatre website and see who starring near you.