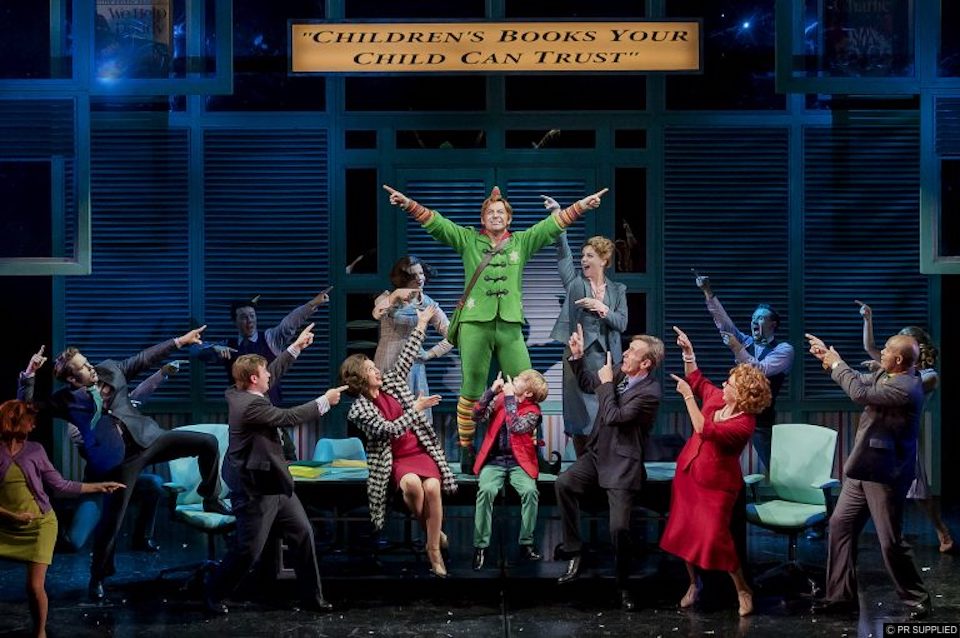 Tuesday Night was a star-studded affair as the North West’s celebs walked down the red carpet at The Lowry Theatre adorned with a large red sleigh. Everyone from Corrie’s Kym Marsh and Brooke Vincent, Real Housewives of Cheshire Lauren Simon and even X Factor star-turned-gay pin-up Lloyd Daniels (yes, he’s just as gorgeous up close) were in attendance. The reason? ELF: The Musical.

To sum it up in one word would be an injustice but if had to do it’d be: transcendent. I entered the theatre with slight apprehension that one of my favourite Christmas films would be turned into a mushy pantomime but I am thrilled to say I was wrong. A script scattered with hilarious jokes (though some more New York-based one-liners didn’t quite resonate with a Salford audience) about everything from Donald Trump to the recent news headlines about certain “physical misconduct” were paired with amazing feats of physical comedy.

The show’s star, Ben Forster, is a tour de force channelling his inner Will Ferrell as Buddy the Elf. Everything from his mannerisms to his body movements had all the audience members in hysterics and you couldn’t help but feel his pure joy. Ben remained high energy throughout, hitting you even harder during his low points. Joe McGann is divine as Walter Hobbs, Buddy’s Dad, a workaholic who has no time for Christmas nor his family and is backed up ably by the fantastic Jessica Martin as wife Emily and a confident turn by the young Lochlan White as his son Michael. A personal highlight for me was Liz McClarnon in the role of Jovie, Buddy’s girlfriend. The ex-Atomic Kitten star sounded amazing and watching her turn from jaded New Yorker to a Believer was thrilling at every turn.

I could also write endlessly about the extremely talented supporting cast and the high energy and very game ensemble but I have to single out Lori Haley Fox as Deb, Walter’s hapless secretary. Rare have I seen such amazing comedy timing. Reminiscent of Julie Walters, Lori’s slapstick movements and characterisation remained high-energy throughout the entire show and was pure comedy from the start. Every appearance she made was met with pure joy from the audience and, deservedly, received huge applause at the end. I felt, in that moment, I was watching a star.

The songs themselves were not particularly memorable but I enjoyed every single one. Unlike many other musicals, Elf doesn’t seek to impart any larger metaphorical wisdom with its songs instead allowing every number to play a vital part in moving the story along. Highlights include ‘World’s Greatest Dad’ where we get a feel for Buddy’s enthusiasm and desire to have a present and caring Father which makes it even more crushing during the reprise, when Buddy begins to lose hope. Then there’s the call-to-Christmas-arms barnstormer ‘Sparklejollytwinklejingley’ (complete with impossible-to-imitate hand-ography). ‘A Christmas Song’ invites us all to simply sing to get into the Christmas Spirit whilst Act Two’s ‘Never Fall In Love With An Elf’ is a hilarious listicle of why dating an Elf may be a bad idea. However, as much as the choreography and energy of each number was comparable to the best and brightest of Music Theatre, the songs themselves failed to provide any sort of earworm. Shows like Wicked have their anchor numbers like ‘Defying Gravity‘, Elf was missing that big song you can’t get out of your head.

The show went all out and the investment was clear. The entire cast acted and sang with all their heart and their hard work showed on the stage. It was a balls-to-the-wall feast of glee. The lighting and special effects were world class, complete with in-theatre snow and a flying sleigh. Elf did not leave you feeling that it was missing anything and I defy anyone to watch the show and not be excited for Christmas. The show is also very inclusive, with a diverse ensemble which included two gay characters, one of whom is told by Buddy that you can “never have too many boyfriends”.

I can not recommend this show enough. Whilst the ticket pricing is a little steep if you’re a larger family, it is worth going if you can or I fear you will risk missing possibly the best musical to come to Manchester to date.