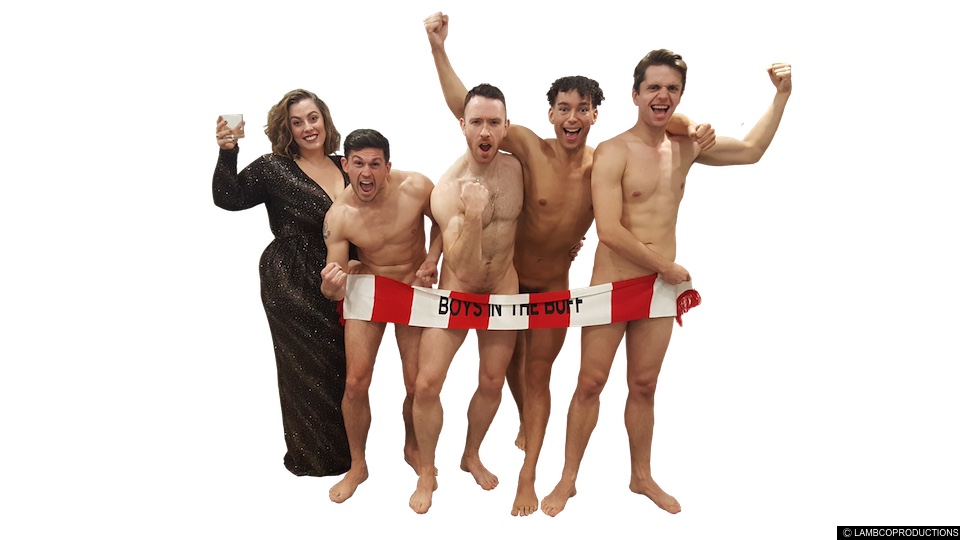 The Full Monty. Naked Boys Singing. And put Boys in the Buff in that category.

Yes, these are shows where the male cast take their clothes off and sing and act (a bit) for the audience. Of course, The Full Monty was the biggest of the bunch (biggest I mean most popular – ahem). Naked Boys Singing was the gayest, and Boys in the Buff is in a category all by itself – the campiest!

Four good-looking young men and a voluptuous compere entertain us with their flare, razzle-dazzle, and their bits (well not the compere – who is female!) in a show with witty and cute songs and dialogue but perhaps lacking in good taste, and in a couple of cases, passable acting! But singing, and acting, is not what this show is all about – we’re left in anticipation of waiting, and wanting, for the boys to take their clothes off. In the meanwhile, we are treated to really fun songs like ’Size Doesn’t Matter,’ ‘Does My Bum Look Big in This,’ and ‘Let it All Hang Out,’ and dreadful ones that include ‘Dancing in the Semi-Nude’ and ‘My Foreskin and Me.’ There’s also audience participation much to the delight (not) of the audience. But in the intimate confines of the Kings Head Theatre, where the first two rows are so close to the stage it’s almost a crime, the boys really pour out their hearts, and display their bits, for us soldieringly. Adam Mroz is so cute and sexy; you just want to take him home and put him on your bookshelf! Hunky Adam O’Shea, who was in the original production at the Lost Theatre this past summer, brings his muscles with him, – he’s certainly got pecs-appeal! Daniel Timoney is along for the ride, as is Eli Caldwell. But Shani Cantor is just fab fab fab as the hostess with the mostest! All in all, it’s one hour of fun!!!

Boys in the Buff plays at The Kings Head Theatre until Dec 9th, 2017