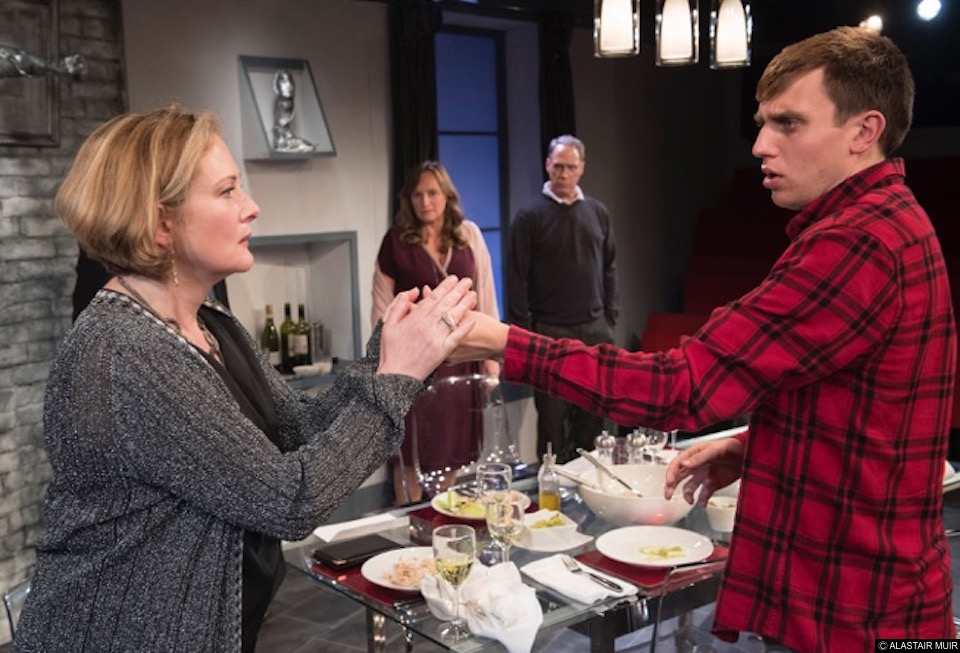 The title of a new play at Trafalgar Studios – Late Company – means that the family the Hastings invited over for dinner are late, and they are also late in apologising for the suicide of their teenage son.

Debora (an amazing Lucy Robinson) and Michael Hasting (Todd Boyce) have invited Bill Dermot (Alex Lowe) and his wife Tamara (Lisa Stevenson) and their son Curtis (David Leopold) over for dinner to their fancy and art-inspired home. Curtis and Debora & Michael’s son Joel were friends in school, however, Michael committed suicide after being constantly bullied and taunted by the other kids in school (including Curtis) for being gay and a bit feminine. So Debora (and less so Michael) have invited the Dermots over for dinner on the one year anniversary of Michael’s death. It’s a dinner where Debora wants to have the ‘conversation’ – to get everything out in the open and to have an open and honest discussion with Curtis to determine the reasons and motive for doing what he did to Michael, and most importantly to find out why. But the dinner doesn’t go according to plan, it’s brought up bad emotions and feelings that Debora and Michael were trying to get over. But it turns out that Debora was never really there for Joel, and that Michael’s job as an MP took him to Ottawa a lot of the time, and Debora was always focusing on her art and not really on Joel, so Bill and Tamara subtly advise Debora and Michael that they missed the warning signs because they were too involved in themselves. But no matter who the finger is pointed to, Joel is gone forever, and no yelling or conversation will bring him back. And it’s mostly Debora who longs for closure, and perhaps she’s feeling a bit guilty over Joel’s suicide.

Late Company throws heavy emotional dialogue at the audience right and left, and it’s delivered by an excellent cast. Robinson as Joel’s mom has the showiest part. She’s angry and upset and wants closure. Stevenson is also very good as the mother whose son is still alive, she just can’t put herself in Debora’s shoes but she is willing to do as much as she can to help ease the pain. And Leopold is a wonder as the son who doesn’t have much to say during the dinner but near the end, he comes into his own. Gay playwright Jordan Tannahill was only 23 when he wrote Late Company in the wake of a peer’s suicide, and he has written a timely and evocative play that’s very relevant today in a world of constant bullying and peer pressure and what seems like the lack of rules on social media. Late Company is a short 75 minutes but it packs a wallop during this time and at the end, you will find that your heart has dropped into your stomach. A must see!