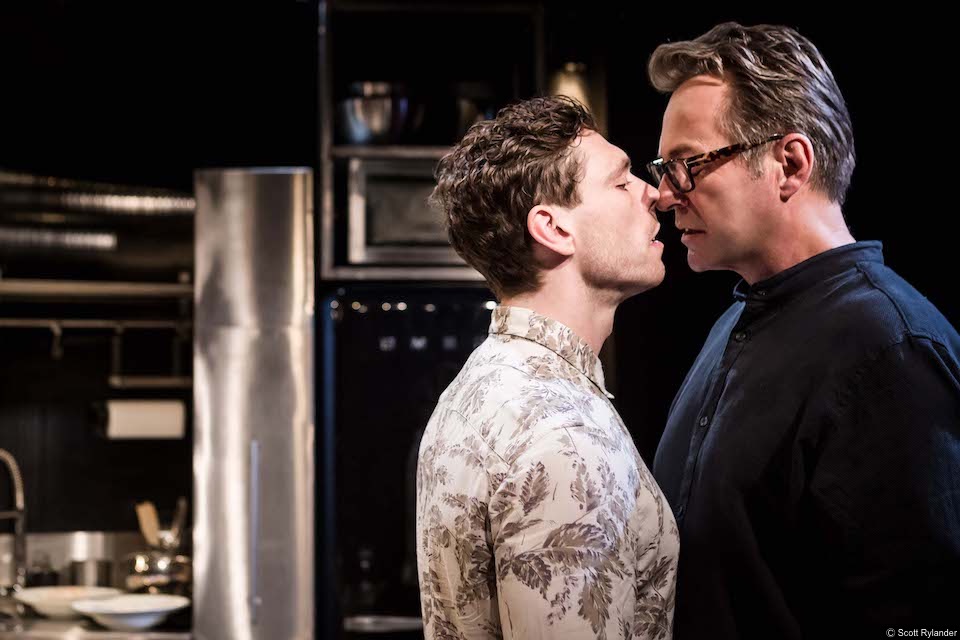 Acclaimed musical theatre writer Stephen Clark, who died last year, penned this two-hander play as a vehicle for uber camp legend Julian Clary. The play concerns ageing architect Michael (Julian Clary) who is cooking dinner for a younger man (James Nelson-Joyce) who’s he’s picked up in the pub. As he slices, boils and fries the food in a functional on-stage kitchen he shares his thoughts on sex and death. Naturally. Once Tim arrives it’s not clear whether it’s sex or death that’s on the menu and who is in charge of the situation.

Let’s get some important things out of the way first. Yes, Julian Clary can cook. To be fair, it’s a simple recipe, though. Shirley Valentine had to fry chips and egg. He just chucks a few things in a pan and rustles up a pasta sauce. Can he act, though? Partially. He manages to deliver the tight monologue that forms the first part of the ninety-minute play but once the action heats up he flounders a little. His character’s uptight and rigid persona suits his physical presence and makes the job an easier one.

The main issue here is the play itself. It just doesn’t quite work and although mildly engaging it misses the mark more than it hits it. It’s a fairly relentless onslaught of thoughts about the death of celebrities. What should be sinister feels absurd and what should be absurd feels humdrum. What feels like a calculated move to shock comes across as tedious. It’s also, bafflingly, partly in rhyme and there’s a bizarrely intrusive soundtrack to the piece.

On the plus side, the kitchen is stylish and attractive as is the young actor James Nelson-Joyce. Spoiler alert: expect full nudity. Julian Clary is an interesting spectacle and the faults of the piece aside it’s good to see him tackle something that’s different from his usual milieu.