THEATRE REVIEW | Richard Carpenter is Close To You, Touring the UK 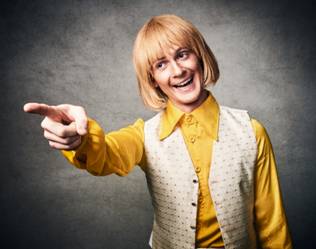 Don’t expect to hear any Carpenters’ songs at the show misleadingly titled Richard Carpenter is Close To You.

Why? Because this show does not have the rights to perform any of the Carpenters’ songs. Performer and writer Matthew Floyd does his best to not play more than six words of any of their songs otherwise he could be sued. And there is a disclaimer for this show: The affectionate but unsparing parody is not endorsed by the real Richard Carpenter.

So what are we left with? A musical show that somewhat makes fun of Richard Carpenter, mocking him as the second fiddle to ‘the voice’ that was his sister’s – Karen Carpenter – for it was she, not Richard, who was the face, and of course the voice, of The Carpenters – the biggest selling American group in the 1970s (American groups versus other Non-American groups as Floyd states in the show).

But poor poor bitter Richard. After the death of his sister 35 years ago (has it been that long already?), Richard is left to look for work in any way shape or form he can. He has an agent who pays him no mind, though she books him on the QVC channel where pushes his new remaster of last month’s remastered Carpenters Greatest Hits. He’s also trying to push his own new album but no one is having it and/or buying it.

Richard used to be on top of the world (with his sister), though now he’s back at the keys of his piano and his sister’s legacy is still looming as large as ever. What will become of Richard? Will he be relegated to the not-so-famous group of famous siblings in heaven – such as Solange Knowles and Serena Williams? Go see Richard Carpenter is Close To You and find out! Every sha la la la la la la la la……..

Please click here for more information and to purchase tickets: