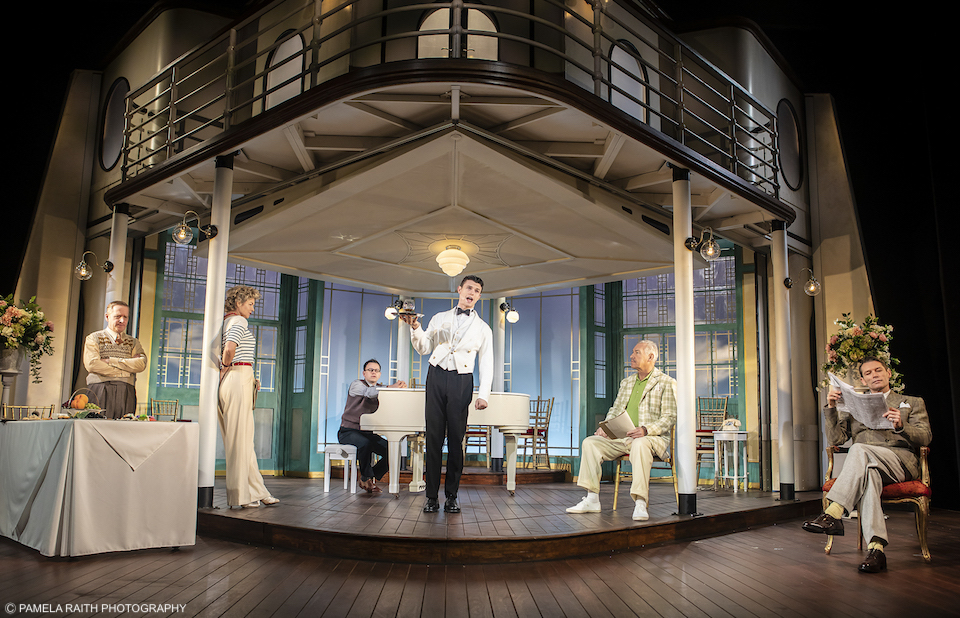 As a theatre company board a cruise ship to cross the Atlantic to New York for the premier of their new piece, it’s not just the waters that become choppy. Following the overhearing of an ill-timed romantic interlude between his two leads, Hungarian playwright Turai tries to keep his upcoming production on track, by re-writing parts of his script to cover up for their indiscretion. But with only four and a half days to rewrite and rehearse the play, it is all hands on deck to keep things afloat.

Turai is played with an air of camp sophistication by John Partridge (EastEnders) and bounces nicely off Matthew Cottle (Spooks) as his downtrodden writing partner; whilst rising star Charlie Stemp outshines them both with a confident portrayal of the cabin boy, Dvornichek.

Despite an impressive and lavish art deco set, sadly, the play holds little else in terms of appeal. The script is neither witty nor amusing, eliciting only the briefest isolated pockets of laughter (primarily from the same audience member); whilst the direction is lacklustre at best and inexplicably tacks on a wholly misplaced musical number at the end of each act. The whole thing doesn’t really know quite where to put itself – it is not quite sophisticated comedy, not quite farce, not quite “Carry On” and not quite musical comedy. Sadly, unlike the fictional ship, the whole story seems to go absolutely nowhere.

Tom Stoppard’s play is a wordy affair with a rapidly delivered script which is awash with very gentile and outdated comedy and a smattering of physical slapstick thrown in; and fans of Stoppard’s work will no doubt relish the opportunity of seeing one of his lesser revived pieces performed in a professional, touring production.

Despite a few issues with diction at times, the production is competently presented, but ultimately the show itself never really sets sail and ends up casting the audience member’s interest adrift.

Rough Crossing is currently at the Sheffield Lyceum until 27th April 2019 before continuing on its national tour.