THEATRE REVIEW | The Hundred and One Dalmatians, Birmingham Rep

THEATRE REVIEW | The Hundred and One Dalmatians, Birmingham Rep

★★★★ | The Hundred and One Dalmatians, Birmingham Rep 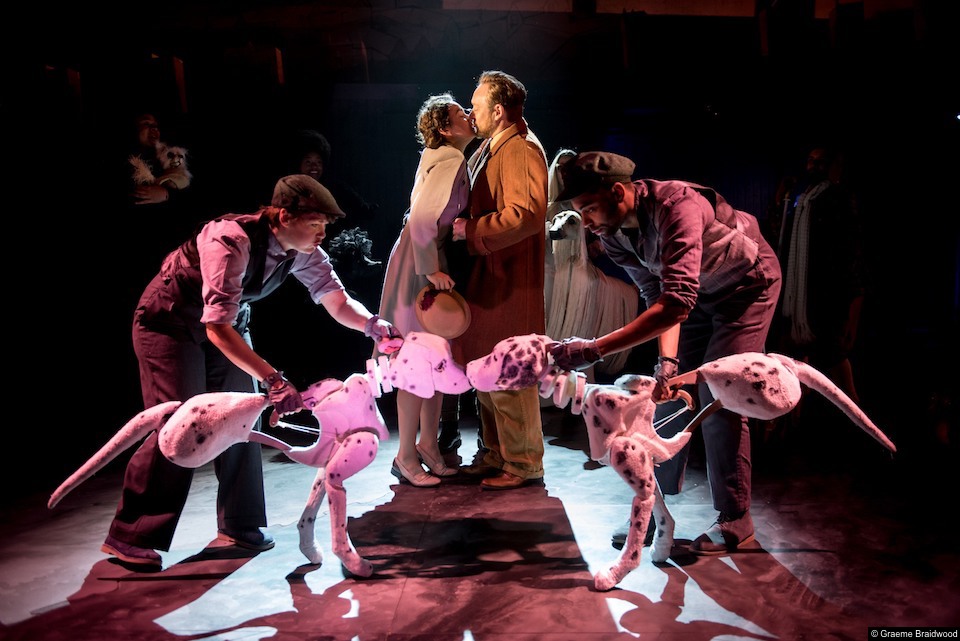 The Hundred and One Dalmatians, a childhood favourite, presented by the Birmingham Rep, had fun, laughs and tasty treats of darkness. The puppets, designed by Jimmy Grime, were a show-stealer. The way in which they moved and looked was so real – you had to blink to realise they were not real.

A very commendable performance for all the artists who held/manoeuvred the animals. The dogs looked bizarrely realistic, with the heads at the right scale of the real species – most realistic was the Afghan Hound. The puppetry/dog handlers were incredibly agile, mixed with exquisite acting and singing really enhanced the narrative. Oliver Wellington (Pongo) was particularly impressive with his dextrous movement and voice. The way he showed the jovial and clumsy nature of Pongo was a good connect to pet owners in the audience, receiving many laughs. Equally, Emma Thornett (Missis) did very well with the emotional scenes with the movement adding superbly to the drama. The astute projection of the dog’s feelings by Emma onto Missis was incredibly captivating. You could hear the emotion in the artist’s voice and felt naturally compassioned while watching the puppet.

The second duo who really entertained were the Badduns: Jasper (Lewis Griffin) and Saul (Luke Murphy). The two men hired to do the deed with the puppies were hilarious and really lifted the show. The actors’ mastery of comedic timing, audience interaction, and versatility of movement raised the level of brilliance. Lewis, in particular, gave every bit of himself with Jasper, leaving no stone unturned in making the kids and adults laugh.

Cruella De Vil (Gloria Onitiri) was excellent and as cruel and devilish as I had hoped. I am sure Glenn Close would have really enjoyed her performance too. Her appearance was perfectly fitting to the role; her voice was harrowing and malevolent, creating darkness so subliminally. My favourite moment of the whole show was when Cruella sang ‘Skin It’ and hitting the last note with such deep and menacing tones really was a goosebumpy moment.

Mr and Mrs Dearly played by Morgan Philpott and Nadi Kemp-Sayfi respectively were great too. Morgan showed good variety with playing the Sheepdog. I think the puppets drowned them out a little though, and sometimes the puppet actors speaking for the dogs, mixed with Mr and Mrs Dearly talking, created a distraction and was not always sure who was talking, or where to look.

This show has to be watched, and though there were heavy Christmas overtones, it is a classic I would watch all year around.