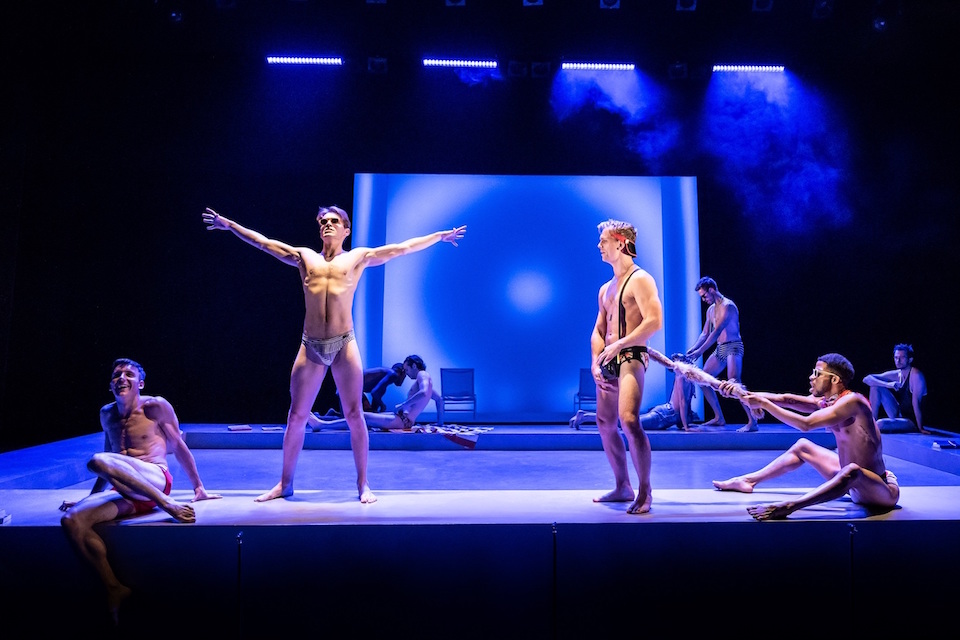 Very strong performances, an emotional and unforgettable experience, and a perhaps an all too real story.

Following a sold out and critically acclaimed run at the Young Vic theatre earlier this year, The Inheritance is back in a bigger venue with it’s still very long running time but with a cast who act their trousers off – literally.

The Inheritance, to sum up its 6 hour and 45 minutes two-parter running time, is the story of a group of young gay men living in present-day New York City – a generation after the peak of the AIDS plague.

These young men don’t really know what the previous generation before them went through; the suffering, the denials, the losses oh boy the losses. Seeing grown men withering away to nothing – one day at the gym and the next month dead, or disappeared and never to be seen again. Men, who were in their prime, who should’ve been living life to the fullest, all dying rapidly. The survivors buried and mourned, but mourning was a short-term process as it was time again to take care of someone else who was dying, and the cycle repeated itself. Yes, this was the reality of living as a gay man in New York City in the 1980s and early 1990s. The Inheritance overlays the gay generation of today with the gay generation of that time and weaves its story via a main central character.

An amazing Kyle Soller (where did they find him?) is Eric Glass, happily living with his boyfriend of seven years Toby (Andrew Burnap) in a rent-controlled apartment on Manhattan’s Upper West Side. Also living in the same building is the older, and wiser Walter (Paul Hilton), who lives upstairs with his very rich but never home long-term partner Henry Wilcox (John Benjamin Hickey). Toby is a playwright who is in the middle of writing a play. One day he accidentally picks up the wrong bag at a bookstore and heads home, but is followed by the young and attractive Adam (Samuel H. Levine), the bag’s owner. After they exchange bags, Adam tells Toby that he is an actor – coincidentally. While Toby’s new script gets more and more attention (as does his new-found friendship with Adam), Eric is enjoying the time that he spends with Walter. Eric learns a lot from him, but also, and most important, is that Walter fondly, and longingly, reminisces about his house in upstate New York, a home that is very special to him and which turns out to be very special to others, which we learn more about at the very end of the first half.

Fast forward and it is Adam who gets to play the lead role, and becomes a star, in Toby’s new play, while Eric and Toby’s relationship becomes fragile and doesn’t last; and surprisingly, after Walters passing, Eric follows his heart and marries Henry after very brief courtship that did not include sex. But Henry’s two sons strongly don’t want Eric to get any of Walter’s possessions, including the house which Walter actually bequeathed to Eric.

The Inheritance author Matthew Lopez takes E.M. Forster’s gay novel Howard’s End and somehow blends it into this tale of gay men, a tale that, well, most gay men can relate to, whether young or old. Lopez uses a character by the name of Morgan (Hilton) – substituting him for Forster, to help with the narrative of the play. Was this really necessary? Personally, I don’t think so. The characters, all of whom when not on the raised center stage platform hang around on the edge, don’t really need this unnecessary plot device to help the story along. I wanted them just to get on with it. At times Morgan walks into the story to help it along, but I don’t think this works.

The story of The Inheritance is strong enough (the meaning of The Inheritance is the passing of HIV from one man to another), and without the narrative 30 minutes could’ve been shaved 30 off. It’s an extremely powerful story, more powerful to some of us who actually lived in big cities in the 1980s and early 1990s and whom were affected, effected and infected by HIV and AIDS. But I actually dreaded (and looked forward to at the same time) spending a whole day at the theatre – it’s quite a long show to get through, and I could tell the friend I had invited to join me in this perhaps once in a lifetime experience didn’t want to stay for the last third of the second part (yes, there are three parts in part 1 and part 2). But the third part in part 3 pays dividends – the legend that is Vanessa Redgrave comes out in a powerful scene to help wrap up the story in an emotional, and very strong, performance.

And this is what The Inheritance gives us – direction with ease and conviction by Stephen Daldry, very strong performances, an emotional and unforgettable experience, and a perhaps an all too real story. And would I recommend it? Yes, I would – both parts.

The Inheritance is playing at the NOËL COWARD THEATRE until  January 19, 2019. Book Now.