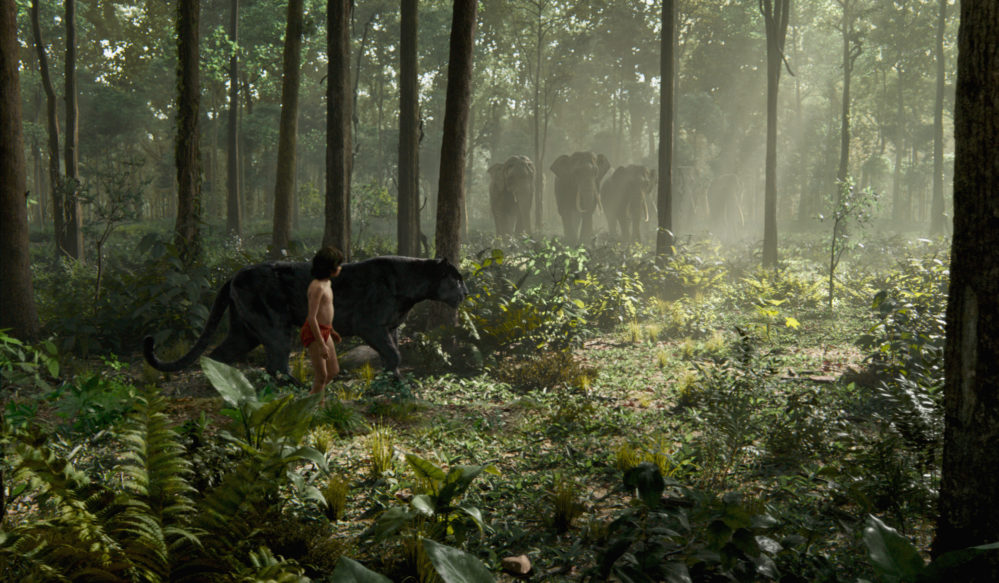 THE JUNGLE BOOK – Live action version of Disney’s 50-year-old classic and boy does it look good.

Nutshell – Rudyard Kipling’s book was adapted into the 1967 cartoon movie classic which was Walt Disney’s last film before he died. It turned into a perennial favourite thanks to its great jazz tunes tastefully reprised here and superb story and entertainment value. Here we have just one actor Mowgli and an array of computer generated characters, phenomenal backgrounds enlivened by the obligatory list of superstar voices. There is a lot of action here throughout the film to appeal to the modern audience coupled with some great comedy and boy does it work on every front big time. A movie for kids, big kids and everyone else that just wants a good honest fun commercial thrill ride with a heart of gold.

Time – 106 mins and man is it crammed from opening chase to closing showdown;

Certificate – PG it’s a family movie of course – it will become a TV holiday staple.

Tagline – ‘The Legend Will Never Be The Same’ – This follows Disney’s successful run of reproducing its animated standards in live action format. We have had Alice In wonderland, Cinderella, Snow White & last month’s The Huntsman and Maleficent (Sleeping Beauty) and every one has been massively more successful than the original so expect the same here.

THE GAY UK FACTOR – Don’t be silly, there is nothing here for your willy or libido, yes there are bears, giant phallic stakes and mano on mano action but get your head out of the gutter this is pure clean fun. Just switch your Scruff off and put your Grindr on mute and relive your childhood you can visit the gay bar on your way home for your jollies.

Cast – Debutant Neel Sethi as boycub Mowgli, then the stars step in – Bill Murray as Baloo, Scarlett Johansson as Kaa the snake, Idris Elba as villainous tiger Sheer Khan, Ben Kingsley as Panther Bagheera, Christopher Walken singing as ape supremo King Louie and so on through Gary Shandling, Lupita Nyong’o, Sam Raimi and even the director himself Jon Favreau.

Key Player – ‘Trust in me’ everyone is superb with one exception see below but the movie is dominated by Bill Murray’s Baloo. He is funny, sad, heroic and just what you want him to be. He was allowed to ad lib through his scenes and unusually for an effectively computer generated cartoon he was able to do voices acting alongside the other characters in particular Mowgli and it so works probably only been bettered by Robin William’s Genie in Aladdin.

Budget – We are in big bollocks territory here with a mega budget of $175 million. No worries though – after 2 weeks it had made over $300 million and it still needs to open in many territories so a lot more moolah to come for this one – it will make a big stack of Rupees and it could surpass Batman v Superman to become the biggest hit of 2016 so far.

Best Bit – 0.51 mins; There are so many great set pieces and they get everyone just right. Therefore you could pick the exciting first chase by Sheer Khan through the grasslands involving a ‘tribute’ stampede or you could pick the sad moment when Baloo has to lie or the excellent moment when Mowgli becomes the hero of the Elephants. All superb but you will really feel the true magic when you see a little boy floating down a stream banging out the beat to a very familiar tune on a big bears chest where you will be heading straight back to your childhood with the biggest of smiles on your face as if Tom Daley’s Speedos have just fallen off mid dive.

Worst Bit – 0.02 mins; The very live looking animals take some getting used to when they start speaking – it just seems weird but you soon accept it and then along comes Bagheera the panther. Ben Kingsley is a great actor and has a very distinctive voice but it is so posh and Oxbridge that coming out of a wild animal or a big cat just seems as wrong as Donald Trump’s haircut.

Little Secret – There were two Jungle Books in production at the same time with this and the forthcoming Jungle Book Origins (plus a Tarzan film too). Disney won the race and is raking in the cash but as we have seen with two asteroid movies at the same time, two volcano movies, two Truman Capote movies or two Terrorists taking the White House films etc it does not mean that the film that comes out second suffers it just has to make sure it is damn good. This was Gary Shandling’s last movie he finished – one month before he died.

Movie Mistake – So so many but in a kid’s film does it matter. The animals are all over the place as the film is set in the Indian jungle but we seem to have species from around the globe. African Elephants ? Sumatran orangutans ? Chinese Wolves ? Himalayan Bears ? Peccary’s and Red Eyed Frog’s from whole Continents away and so it goes on. The snake Kaa is 5 times larger than any Indian species ever found and King Louie is even more out of proportion roughly 10 times bigger than any monkey ever. The scars, wounds and bee stings on Mowgli appear and disappear so often that we lost count.

Awards – Nobody has ever won for voice work alone so it won’t happen for individuals and it won’t get nominated in animated categories as it doesn’t fit the criteria so just prizes for the excellent technical team possibly.

Any Good – Of course it is. Disney is getting really good at delivering these live versions of animated classics and this was probably the most sacred cow and the hardest to do as the cast are almost all animals. Jon Favreau the director delivers big time with every minute put to good use and so much great action and suspense. It looks so damn good too and kids will watch the DVD over and over again and with so much going on that adults will like that won’t drive you as crazy as multi repeats of say Frozen or The Lego Movie.