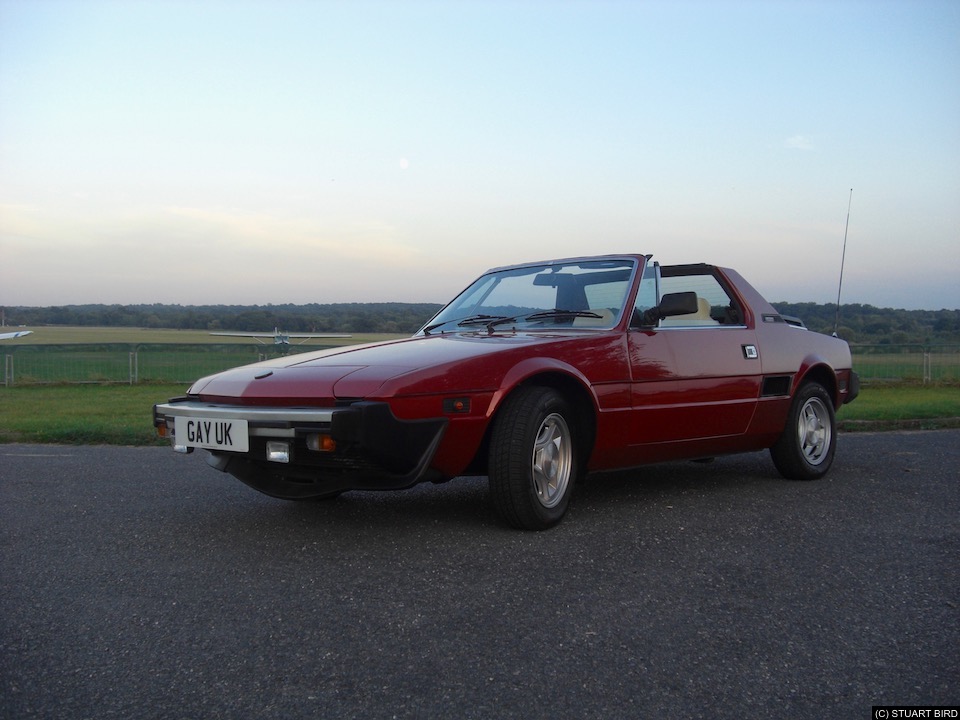 A Champagne Lifestyle for Fiat Money

Picture the scene. America sometime in the in the mid 60s. Following many fatal crashes with people being decapitated or thrown out of their cars, the land of the free was talking about banning convertible cars. European companies that imported to the States went into meltdown.

The British are doomed.

The Germans are still selling a lot of drop top Beetles but struggling to sell the expensive 914/4 and 914/6 targa tops.

Step in Nuccio Bertone and his design house in Grugliasco, Italy. He walks into Fiat with a bold new design. At about the same time a new sports model was being designed in-house at Fiat to complement the soon to be released 128.

In a backroom at Bertone, a designer named Marcello Gandini has penned a wedge designed 2 seater putting the Fiat 128 engine behind the driver. Nuccio is a persuasive man. His design house is legendary with designing some of the finest cars in the world. Fiat bosses like it. Bertone is to build it. A beautiful marriage is formed and a mid-engined sports car is within easy grasp of the everyday man and woman.

To be honest the Bertone design isn’t all that new. Mid-engined cars had been around for a number of years for the rich and famous. Lamborghini, Ferrari and Maserati all offered those people the chance to get close to the ultimate road-going racing car layout. Here, however, was Nuccio with an idea to bring a whole new concept to the masses.

On its launch in 1972, it was praised for its handling, looks and practicality. It also met the US criteria for open top cars. It was all win win win for Fiat. That strict criterion for open topped cars was soon scrapped. Oh well, what was done was done and without it, we might never have had the X1/9.

The first cars were fitted with the little 1300cc engine. It liked lots of revving and it was a willing engine alas it lacked the ultimate punch that the looks suggested it should have had. The Fiat 128 coupe could outrun the heavier X1/9 by a few seconds and had a faster top speed too.

This was addressed in 1978 with the fitment of the Fiat Strada 1500cc engine raising power to 85bhp and the killing off of the coupe. It doesn’t sound a great deal when in 1978 the Golf GTi had 110bhp but the magic of the X1/9 was so alive that the lowly performance figures somehow could match the Golf in many areas including top speed. Up against the new generation of hot hatches, the X1/9 had great handling up its sleeve that helped make up for the lower figures. In some ways, the X1/9 suffers from small man syndrome and gives its best shot in making up for shortfalls in outright figures.

Even today the looks are the talk of the town. It’s sleek. It has vents in the rear. All panels opened up like a Lamborghini Countach. It has pop-up head lights. The driving position was quite neutral and the seats comfortable and supportive even over long distances. The roof was removable. It was pretty.

Now there lay the problem. It looked pretty. It soon became known as a hairdressers car and quite unfairly so. Those cute looks and lack of power gave you a sense of security until you overstep the mark. The legendary handling is phenomenal if kept within both yours and the cars limits. The X1/9 will bite you and bite you hard if you take your mind off the road.

Sports cars were never practical. Boots were small and only squishy bags could be accommodated for those going away for the weekend. Not so in the X1/9. The car possessed a neat trick in its design by having 2 boots. Even with the roof stored in the front, it was still more than enough for more than a weekend. And up until 1982 Fiat even gave 2 matching bags with every car sold. Today they are the ultimate X1/9 accessory to have if you can find them.

It is an involving car to drive. You can exploit its handling and have fun. In the wet, it needs a lot more care and thought put into the moves. All this happens on skinny 165 section tyres and tyre pressures are essential.

The example in the pictures is mine. Don’t for one moment think that l am biased and I’ll rave about it being perfect. It isn’t the perfect car by a long shot. It’s called ignition key roulette. It’s temperamental. Sometimes it’ll start on the first turn and sometimes it won’t. You just never know.

The handling is fun. It has bitten me in the arse when it got a little messy. The cost was a new wheel. The steering is low geared and requires a lot of twirling of the wheel. A quick rack is available and at some point, I will fit one.

Like all ageing Italians, it needs looking after. The biggest killer is rust. Once rust has set in it can set you onto the road to ruin. The shells have 3 bulkheads that are complex with double and triple skinned areas to increase rigidity in an open top car. Thankfully most body panels are available and there is a good Facebook page and members club out there to help.

Running faults to date include an oil leak from the fuel pump, carburettor air leaks and coolant leak from ageing hoses. All easy fixes thanks to the mechanicals being basic Fiat 128/Strada and far simpler to repair than a Samsung printer. It’s a great little car for that occasion when the wind in the hair is needed but comes with one major flaw. Just be prepared to correct people when they call it a Triumph TR7!