Book tickets for Lady Day at the Wyndham’s Theatre 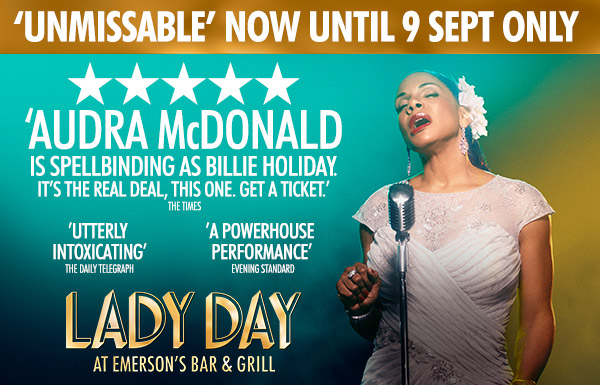 What is Lady Day at Emerson’s Bar & Grill all about?

Audra McDonald making her West End Debut in a show where she performs as Billie Holiday in Lady Day at Emerson’s Bar & Grill. And while most of us have never actually seen the real Holliday sing live, I can only imagine McDonald is as close as the real thing.

★★★★ It’s not just that McDonald is acting like Holiday, but McDonald sings like Holiday as well. There’s a reason why McDonald has won 6 Tony Awards, she is one if not the most accomplished stage actress of our time. The likes of Bernadette Peters, Patti LuPone or Elaine Paige don’t hold a candle to McDonald.

TBC including an interval.

Watch a clip from Lady Day at Emerson’s Bar & Grill

More about the Wyndham’s Theatre

Wyndham’s Theatre is a West End theatre, one of two opened by the actor/manager Charles Wyndham (the other is the Criterion Theatre). Located on Charing Cross Road in the City of Westminster, it was designed c.1898 by W.G.R. Sprague, the architect of six other London theatres between then and 1916. It was designed to seat 759 patrons on three levels although later refurbishment increased this to four.

Click here for venue information including maps and directions.