Book tickets for The Kite Runner at the Playhouse Theatre, London 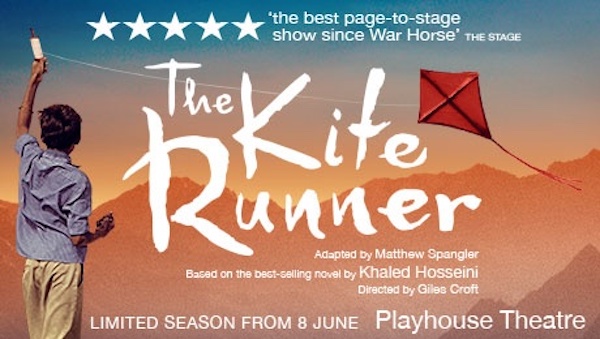 Tickets for The Kite Runner are available to buy today.

What is The Kite Runner all about?

The Kite Runner is the story of true friendship, and also true betrayal. David Ahmad is Amir, who lives with his wealthy father Baba (Emilio Doorgasingh) in Kabul, Afghanistan. They employ Baba’s long-time servant Ali (Ezra Faroque Khan), along with his son Hassan (Andrei Costin). Both Amir and Hassan lost their mothers, so Amir and Hassan have become close, even though they both come from different classes of society.

★★★★ The Kite Runner doesn’t need any sort of magic wand or razzle dazzle to tell its story – it’s the story in itself that is strong enough to hold the audience’s attention. We see the beautiful friendship between Hassan and Amir that is eventually shattered and when the story takes it to another direction we feel Amir’s pain and heartbreak and guilt and we hope the characters will eventually find happiness, though deep down we know that’s not going to be the case. Matthew Spangler has successfully adapted the book for the stage (again) while Director Giles Croft works with an excellent acting ensemble with a very minimalist set as he excellently guides his actors to portray the characters very beautifully and emotionally.

Watch a clip from The Kite Runner

More about The Playhouse Theatre

The theatre was initiated in 1882 by Sefton Parry, a speculative theatre builder, who bought the site hoping it would have to be purchased from him by the South Eastern & Chatham Railway Company, whose terminus was alongside. The Royal Avenue Theatre opened on 11 March 1882 with a revival of Offenbach’s Madam Favart. The prefix Royal was soon dropped from the theatre’s name, but comic operas, burlesques and the like remained the staple fare for several years. For much of this time, Arthur Roberts, a popular star of the music halls, led the company at the Avenue.

Click here for venue information including maps and directions.

BUY TICKETS FOR THE KITE RUNNER