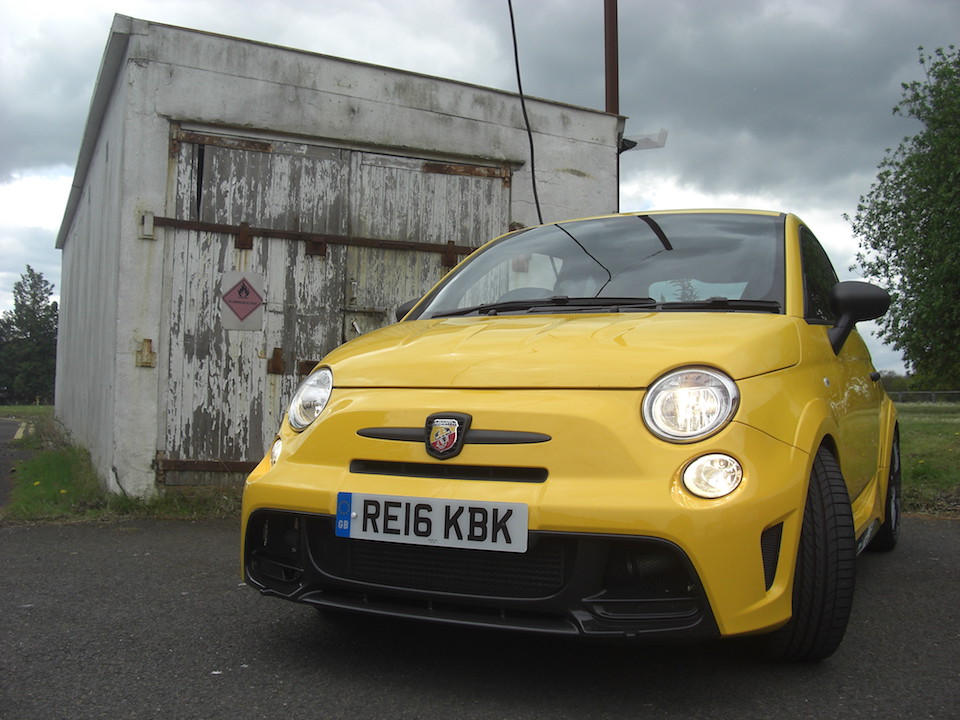 THEGAYUK were quite privileged to have tested the Abarth 695 Biposto Record. This was number 118 of 133 made for the globe. It’s quite a rare machine. Why 133? It’s to mark 133 records Abarth hold. Is this then the reconstruction of Abarth instead of it being badges stuck to a Punto side skirt? Hell yes!!!

Externally it looks like my old 500. This model still uses the older style lights unlike the rest of the range but this is probably because it was launched in 2015. The boot opens the same way as mine. Speaking of the boot, there is tons of space available compared to the standard 500. The rear seats appear to be missing and have been replaced with a cargo net and 3 bar roll cage of titanium by Poggipolini.

And then you notice other “items” missing that make you suddenly realise this isn’t just an overdressed 500 with 35 section tyres and red Brembo brakes screaming from behind lightened O.Z 18 inch anthracite wheels with a 1400cc turbo engine. Or underdressed if you like lots of bits like door armrests and a radio. You get little red fabric loops and yet, strangely enough, you also get electric windows. As for the missing radio, the hole you get does give good acoustics to your smartphone’s speaker. It’s not a 500. It’s a 695.

All this visual and tactile assessment was gained just by moving it around the car park at work so on showroom appeal alone you might be thinking that you are not getting a lot for your £36,000. For a small car, the turning circle was also a bit below par. That then will be because of the limited slip differential.

Before you even drive it you notice a growl from the Akrapovic titanium twin exhausts and this is before you press the sports button that stiffens the steering and makes throttle inputs more responsive. It feels like a small adjustment but when the crazy gets crazier it all comes together like surfing a tsunami.

I drove it before I had a chance to look up the spec sheet. I had in fact asked for a much lesser Abarth so I wasn’t quite expecting a machine that was so visually striking in Modena yellow while being quite acceptable on the road. Its behaviour is impressive. The Sabelt bucket seats clad in carbon fibre felt perfect for both comfort and support on the road or on the track. Potholes aside, it handled the city commute with aplomb. It didn’t behave like a track day ready car or make you wish for softer springs. Even the clutch was as simple to operate like that in the lesser 1200cc 500

Sadly it attracts two kinds of wrong attention. Firstly you get idiots in de-badged Corsas always wanting a traffic light grand-Prix which you let them win because the comparison is so unfair and then you get GTi drivers wanting to prove a point to you and the pint-sized rocket to which you greet with enthusiasm. Sometimes it can be over very quickly and in your favour too. The 0-60 time of 5.9 seconds catches them out from the car weighing only 997 kg. It really doesn’t weigh a lot.

I’d like to say the 695 is all about raw power. As you can see though it isn’t. It’s quite useable. In normal mode, it’ll attack the asphalt cleanly and quickly. There is a little hesitation from the throttle response but this prevents you making errors in the bumper to bumper city traffic.

Press the sports button then and my word does it change. Instantly and before the facia panel has changed its digital display to show G forces and gas inputs, you notice it’s growling snap from inputs and the gentle increase in steering weight. Press on and the turbo now vocalising its induction and the exhaust snaps and cackles. It sounds like a modern day supercar.

Thankfully the limited slip differential does wonders at reducing torque steer and with 190 horses at full gallop at 5500rpm, you need it. Thankfully it doesn’t totally eliminate it so you still get that “feeling alive” craziness you should from a mighty power pack in a car this size. Press the TTC button (Torque Transfer Control) and it does wonders in keeping it in a straight line while also reducing some understeer when really pressed. And press it I did. Unlike the 208 GTi we’ve tested, lift off mid corner and there is no sudden oversteer. The stripped out insides make this an enjoyable road ferret.

It goes some way to show what the 500 shell is capable of. That rear end is very light. In theory, I expected it to become a little unbalanced during weight transference around corners and under hard braking. Even when braking really hard which you can do quite easily, the ABS system is rapid in firing its pulses to stop you. There is no fuss from the pedal. No annoying ABS pulse feel. The 4 pot Brembos up front stop you. Sadly the hazard lights flash during hard braking. I was always putting on the hazards.

The suspension is also amazing. Shox provide the vital parts fitted to the standard cars front wishbones and solid rear beam. That is when you realise the potential the normal car has give or take the other thousands of pounds worth of kit the Abarth has added to it. That £36k is money well spent.

So what have we got here than in steel and precious metals? It’s a toy really. A bit of a play thing. At any price, the Bisporto assures exclusivity. It’s there for the person who wants to go fast, fuss free and not have trouble parking it in the city, unlike the Ferrari. It’s also there for a little track day fun. There is also carbon fibre. It’s real carbon fibre. This is the kind of car that looks good with it. And it’s economical too. I managed 29mpg during my test.

I wouldn’t have a Bisporto. Even if you can find the limited run Record model, It’s too much for me. I like my sports cars to be a little bit more cruiser than skateboard. It’s fast. It’s rapid. It demands respect from the moment you pull away because you can go very fast very quickly. Respect I give anyone who buys one. To hell with it, I’ll have 2, It’s fabulous.

The sensitive hazard lights
Idiots in Vauxhall Corsas
Making GTi drivers unhappy. No, seriously I am… NOT