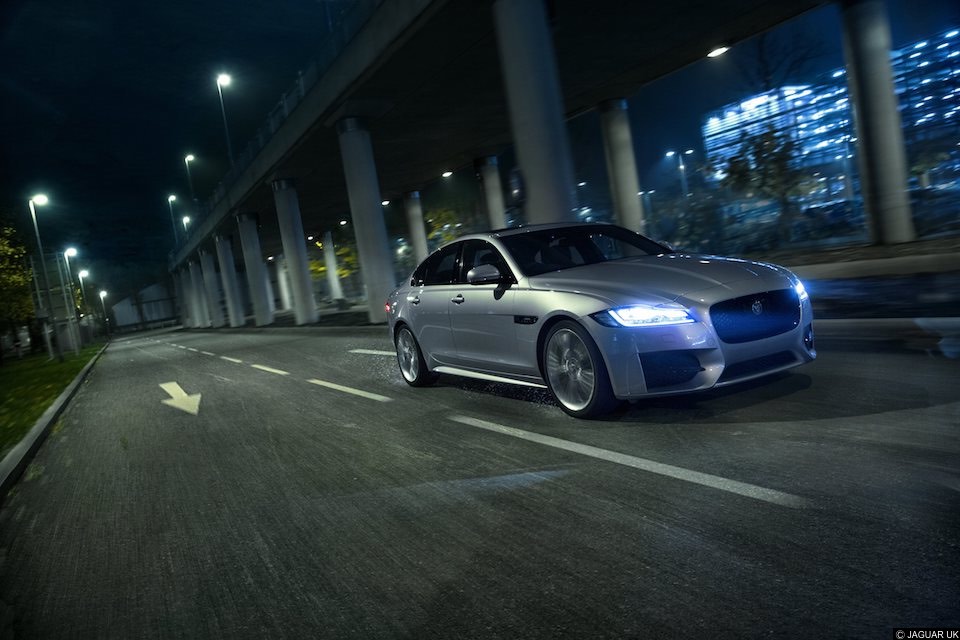 Sat there in its big blackness of black paint, black wheels and privacy glass, it attracts attention. It attracts compliments. It is safe to say that on the road the compliments are equally forthcoming.

There is something about a Jaguar that you don’t get with any other premium brand car. There is a lot of acknowledgement and a lot of admiration. Perhaps it’s because of its inherent Britishness that does it. Perhaps it’s the drama that has surrounded the Jaguar brand.

Since being taken over by the Tata Group in 2008 the changes at Jaguar were slow and steady at first. Within 8 years they started getting it together. Add a couple of years on top of that and Jaguar now have a bigger range of cars than ever before and the brand is now as desirable as it was in the 60s.

It’s not to say that the 80’s and 90’s Jaguars were not desirable, it’s just that they were questionable in terms of reliability, build quality and resale.

It’s not all good news though. The XF R-Sport I tested failed me in one area. I’m being picky, probably more so than I usually would be but only because I saw it, it annoyed me. The top of the boot area under the parcel shelf lacks a cover. You wouldn’t see it. I can’t quite explain it. It’s just missing. It’s an area that gets missed by many. To me, it’s like the final piece of the boot lining jigsaw.

What isn’t missing is driver enjoyment. From the outside, the big cat is very attractive. Sleek headlights and integral grill now replace the tired retro look they tried. The looks work. It makes for an elegant design. The lines flow from bonnet to boot. There are no tricks.

Driving the XF R-Sport AWD is made easy thanks to the parking assist pack with surround cameras. An option worth having. The cameras show the front wheels making parallel parking a breeze. There is now no excuse to scuff the alloys on a curb.

Adopting a perfect driving position is very easy with almost infinite adjustment available on the memory seats. Handy to have should you wish to car share with a significant other. This then sets you up to enjoy anything you want to throw at the XF R-Sport. I wouldn’t want to be a passenger in the XF. It’s not that you don’t get enough space to stretch out or comfort, it’s just that driving the Jaguar is where you enjoy it the most.

Together the car flows along. The 250ps turbocharged 2 litre Ingenium engines power delivery is smooth and progressive in its application of power making the XF R-Sport a pleasure to drive. It lacks some out and out slam-you-into-the seat throttle reactions but that would only remove you from the linear feel of the cars flowing progress. If you want that from your XF you can always opt for the S model. Don’t think that this XF won’t get out of the way of its own shadow. With a 0-60 time of 6.2 seconds, it isn’t slow. And all this with a commendable low Co2 output.

All this power gets transmitted via an 8-speed automatic gearbox. The ratios are nicely spaced. If pushed it will hold on to the gear which can be a minor inconvenience. Pull out hard and fast and then come off the throttle would often result in a sudden jerk in the ride where the gearbox had held onto the low gear. The price you pay for all that power and the 0-60 time.

The big structure of the shell is in aluminium and this helps make the XF feel light yet being of light construction does not in any way feel like it flexes. It is a taut chassis and good job too. The handling of the all wheel drive system fails to fail you. It holds on with immense grip. Adaptive Surface Response (AdSR) along with adaptive dynamics make split-second changes to the car’s behaviour. It works well. There were times when you could feel it change from soft barge to sports saloon and its job of keeping you on the road was good. I can’t say I went out of my way to provoke it but I tried a couple of times and I can say it sort of left me feeling a little flat.

It’s not that it is a bad thing in any way. All the gizmos go someway to make the big cat very safe if a little too safe. It keeps the car planted to the road and while it makes you feel like the king of the road, unlike some power saloons, it won’t try and kill you. I can live with that.

There were a few things that to me didn’t quite work. The cruise control seemed a little finicky to set at first. There are many switches on the steering wheel. What I expected to find was adaptive cruise. For such a big and powerful car I expect to find this standard equipment for anything that comes with cruise control.

The Jaguar illuminated kick plates were a nice touch. I’m not a fan of blue lighting though. What would have been nice was illuminated steps in the rear. ‘XF’ set in these would have looked quite nice.

I can forgive it the kick plates and boot trim. However, the XF does go some way in making a luxury barge a great British barge. Driving dynamics aside It’s not quite up there with the Germans in interior tactility. It’s very close though and what would look better on the drive? A Jaguar or a Munich motorway muncher? I’ll tell you this for nothing, I’ll have the Jaguar thanks. For a start, people let you out in traffic.