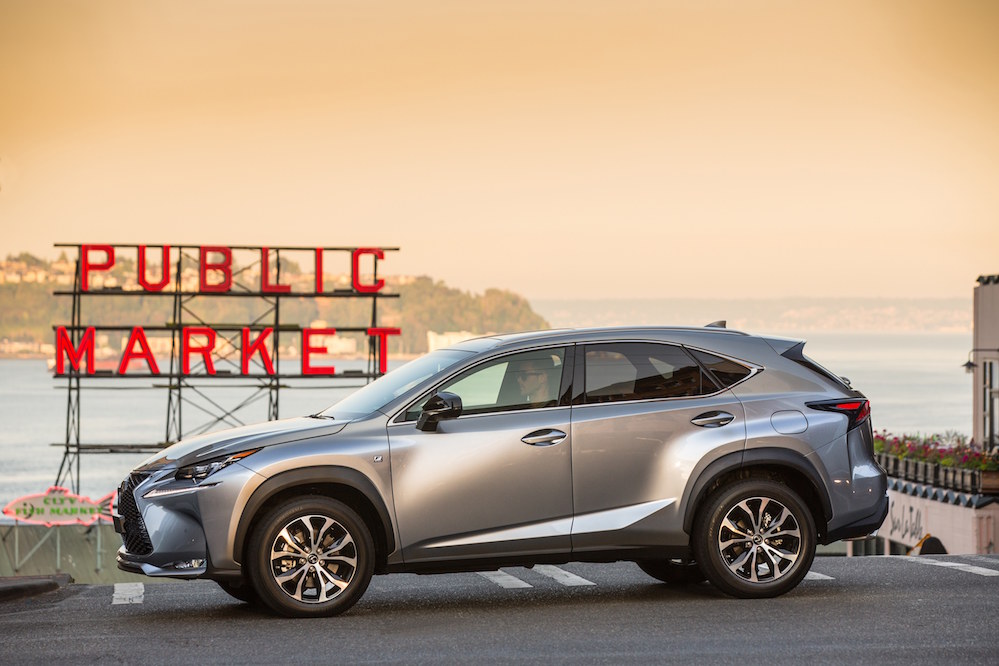 For sometime Lexus have been a bit off the mark. The posher brand of Toyota just never managed to make the grade. Their products were too much Toyota. There was nothing special about them. Take the last generation of RX. A competent car in the making with a striking look but let down by an interior no different to a Yaris.

It’s quite an astounding thing then the new Lexus RX450h. It may have taken them 27 years but finally, they seem to be moving the brand above and beyond parent company Toyota. The inside is special. It feels like a quality product. The fit of the interior has always been one of the key elements of a Lexus. It’s just that they then forgot to add the other elements to make it special. Imagine a Jägerbomb without the Jägermeister. You are left with a plain old energy drink. Gets to the point but that is it.

Now you get what you should for £53,640 of your hard earned cash. The RX cossets you in grand luxury. The seats are some of the finest I have ever come across. They heat or cool or a bit of both. Set to auto and they will soothe you in a fuss-free way in addition to the climate control making it all very relaxing. Just pay attention when grabbing your phone from the charging area under the dashboard that you don’t catch the button. I did just this and all of sudden the seat was at full heat and that is a lot of heat.

It was easy to live with. Something I did scoff at when I read the spec sheet was the all-round electric windows that slow down just before they close to reduce noise. Turns out this is no gimmick. It really does work.

What didn’t quite work for me was the control button on the centre console for the infotainment system. The haptic feedback force is adjustable in 5 increments. It needs 10. On the lowest, it is quite uncontrollable unless you are a whizz playing platform games on the PlayStation. Five was ok but sometimes it was still too loose in my left hand. The infotainment system was easy to use allowing for easy access to the satnav, hi-fi, car info and all manner of settings. The screen is also large. And as if that wasn’t enough you could scroll through options that allowed you to change items displayed on the facia panel. You were always kept up to speed with the Lexus. It told you everything.

On the RX I can’t quite work out if I liked the CVT (Continuously variable transmission) or not. What that means is that the gearbox is matched to the engine speed. Great in principle when connected to a hybrid system that cuts in and out without any fuss, it’s just that when pressed hard it sounded like you were slipping the clutch of a manual car. It does have a fine override system though where you can change up or down. Quite advanced for a CVT.

Sound deadening is exceptional in the RX and the V6 24 valve double overhead cam engine sounded great only if you had the windows open. The payoff wasn’t too much of a hardship for most of the time it was all inaudible. That in itself is a great attribute in a hybrid. The quietness adds serenity to the journey. There was next to no noise from the wide tyres fitted emitted into the cabin on any surface.

Manual inputs into the gearbox amazed me. I hadn’t expected it to be so smooth or adjustable. That gearbox can also take a damn good kicking. The RX won’t sit around idle for long. Unable to actually time it I can vouch that it is indeed quite rapid in its acceleration. What greatly helps this is the impressive figures. The petrol engine alone makes 259bhp at 6000rpm. With the assistance of the electric motors, it adds up to 308bhp and gives an impressive 7.7 seconds 0-60mph time.

What I have briefly mentioned so far is that this Lexus is a Hybrid. It’s basically a petrol car that has some assistance from electric motors. It works well in as much as the motors assist the petrol engine in forward propulsion. You could select electric vehicle mode for up to about 30 MPH which was great in stop-start traffic. Over that speed and the system wanted to jump into petrol mode. I couldn’t quite get my head around the battery life. In EV mode it felt it would deplete the battery quickly. Full battery recharge was quickly achieved with little thought about it.

I’ve not avoided the looks on purpose. It is striking and it was the first thing I was greeted with on first acquaintance. The RX is more than looks alone. The exaggerated family grill makes it look like an angry Darth Vader mask and that is no bad thing. These days when you are paying this sort of money for a car you want it to be striking. The design language is exactly that. It hits you head on. Side on. Rear end. You’ll also find yourself hitting your head on the C-pillar of the rear door when grabbing things from the rear seat. The angle is so sharp it caught me out once or twice.

I have to say I didn’t push the RX around too much. To me, it just isn’t a gun-ho car. It is so much more than that. That said I wasn’t easy on the go peddle. With my heavy right foot I could average 37 – 41 miles to the gallon. The ride was supple over most surfaces. The payoff for this is a bit too much body roll. Due to the high seating position, it felt more exaggerated than it actually was. Overall the driving experience was nice. It has loads of equipment that was easy to use further adding to the luxury feel that Lexus are finally achieving.

I liked the RX450h more than I thought I would. I’ve a few niggles that I’d like sorted before I went out to buy one but in this sector, you could do a lot worse for the money. It has plenty of kit and it’s a Lexus that now makes you feel special.