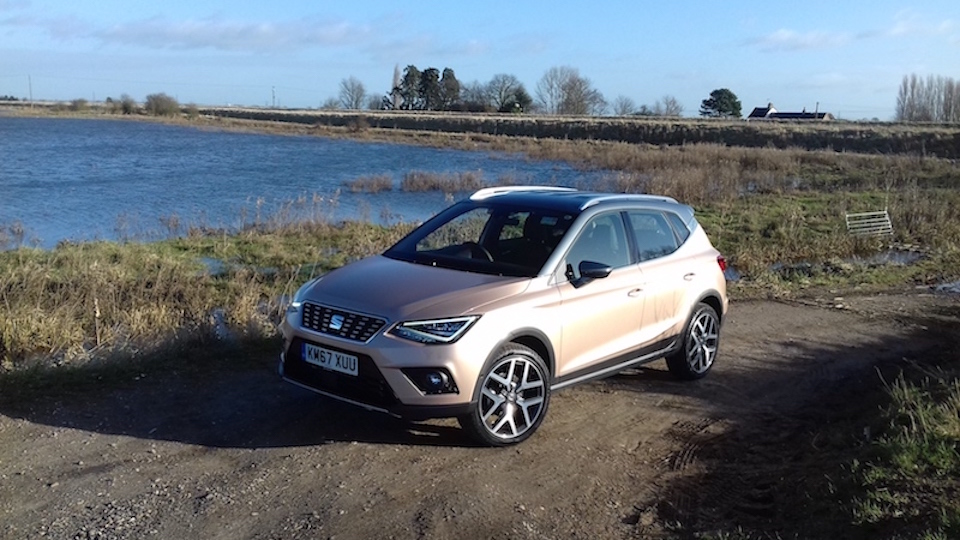 From little acorns, grow mighty oaks. Seat is on a roll at the moment, and there doesn’t seem to be any stopping them at the moment. Indeed 2017 saw sales grow by a massive 18%.

Hot on the wheels of last years new SUV the Ateca is their smaller Arona. So confident with their new model, Seat launched it in the showrooms a few months before a UK motoring launch. Their tagline for the Arona is “Do Your Thing” Safe to say Seat have.

Based on the new MQB A0 platform that is home to the 6th generation of VW Polo, Seat has jacked it up a bit and with their homegrown design, covered it in a body that is in keeping it with the Seat family. A lot has been made of the Arona’s design with it being aimed at the younger spectrum on VAG’s line up.

In some ways, it works. Looks alone are simple and classy but not packed with as much Spanish flair as you’d first have thought. This also goes for the inside. In some ways, it still has a safe approach that VW is known for. I said some time ago when I tested the Ibiza that Seat is now a stand-alone company and deserve their chance to design their cars. It’s a start but not as ‘wow’ as I’d have hoped. Take that with a pinch of salt and what Seat have given you is a small crossover SUV that is both easy on the pocket and good on the eye.

Prices start at £16,555 for the base SE model and rise to £24,235 for the Xcellence Lux. Seat has been a bit clever in their model range line up. 24 choices are available in 6 models. To make it easier there are just three engine choices of 1 litre to 1.5-litre petrol and a 1.6 diesel. All turbo’d with a few differences in performance output. All available with manual and automatic gearboxes but no four wheel drive option. This is purely a front wheel drive car.

Purchasing the car is then made easier. The options list is kept to a minimum and instead of loading up the car, you choose what you want by the trim level. This apparently makes delivery quicker. The only choice you have to make then is the body colour and roof option. Personally, I am not sure if I like this. The purchase of a new car is all about personalising it to suit you.

THEGAYUK.com tried two different models. First up was the £22,095 115ps TSi Xcellence Lux. This had pretty much all you could want with the only option being the DSG auto box. It was nice to see adaptive cruise control included along with driver profile adaptions for responses to throttle and steering.

I’m a fan of the 1-litre TSi unit, and I was keen to see how it behaved in the new MQB A0 chassis. I’m happy to report that it was well suited to the chassis with no evidence of wheel tramping from accelerating quickly from a standstill. Performance wise you won’t find many chances to try its top speed of 113mph and its 0-62mph time of 9.8 seconds isn’t going to win any awards. Economy is going to be good with an average of 56.5mpg being achievable. Exhaust emissions are 114g/km. The Arona ranges from 106g/km for the diesel to 115 for the bigger of the petrol engines.

Inside you are cosseted to a quiet ambience. Something I’ll get to later with the FR. It’s all nicely laid out and well screwed together. Some of the architecture is Seat. It demonstrates a square edge design to things like the door handles in infotainment surround. You can see where the great value in price has perhaps scuppered some material refinement inside. The dashboard top is of hard plastic, and some of the switchgear is directly carried over from the VW group. This again flags up the “not quite there” in design. The layout is simple and VAG. The dashboard on this top model doesn’t have the beauty of VAG adaptive dials. Perhaps an upgrade that will come later.

I was impressed with the new Arona. Its main attribute will be value for money. Youngsters are struggling to get themselves on the property ladder but getting into an SUV from Seat will not be a problem.

Next up on test was the 150ps 1.5 TSi Evo FR Sport with a six-speed manual for £22,040. This is Seat’s top of the range sporty model. It certainly feels sprightly over the other models in the range with 150ps available. It’ll whizz you from 0-62mp in 8.3 seconds and take you to 127mph. The new 1.5 petrol engine certainly makes light work of keeping up momentum and is very flexible. It’s fitted with a stiffer suspension set up as you would expect in a sporty derivative. It removes a lot of the body roll you get with the more subdued models. This, however, causes some upset.

What is apparent in the FR Sport is road noise. At first, we assumed it was from the big 18” alloy wheels. It turned out it wasn’t because the Xcellence Lux also wore the same sized wheels and that was able to carry itself quite serenely along your given route. This then can only be attributed to the dynamic chassis.

Do I like Arona? Yes, I do. Again I would like the see Seat use some more of that hot Spanish flair the Spaniards are known for. As for my model choice, It would have to be the Xcellence Lux. The extras you get over the normal Xcellence far outstrip the extra £1000 is very much worth it. The SE Technology from £17,545 will probably be the most popular sold model.

Price
Ride in softer sprung models
Use of space