Center Parcs will no longer advertise in the Daily Mail

Center Parcs will no longer advertise in the Daily Mail

Following on from the Southbank Centre’s announcement that they won’t be advertising in the Daily Mail, Center Parcs says it will not advertise in the paper either. 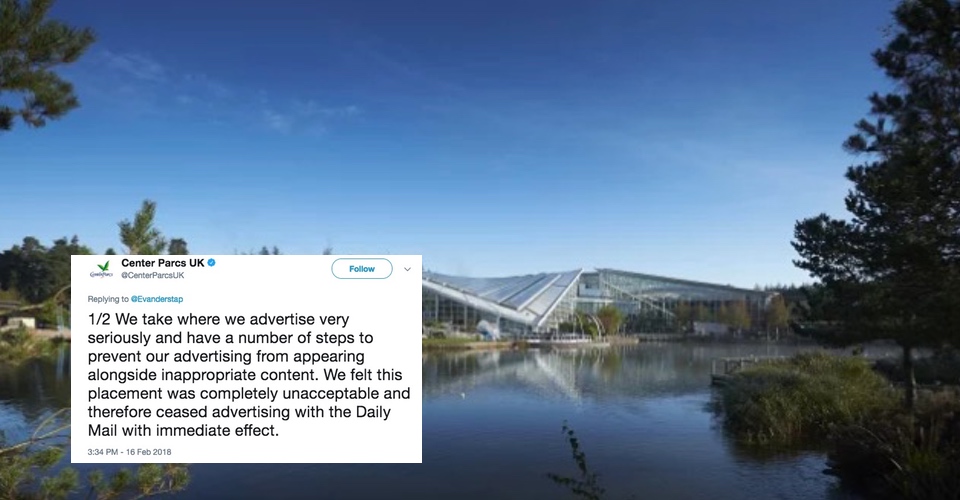 In a crushing blow to the Daily Mail, the Southbank Centre in London and Center Parcs have both said they will no longer place advertising in the outlet.

The announcement follows on from a Richard Littlejohn column concerning the baby announcement by Tom Daley and Dustin Lance-Black.

“Southbank Centre reaches out to audiences through wide-ranging online and offline media titles, across the political spectrum.

“We monitor the environment in which our advertising appears, to ensure the values of a publication are compatible with our own. We have no future plans to advertise within the Daily Mail”.

We take where we advertise very seriously and have a number of steps to prevent our advertising from appearing alongside inappropriate content. We felt this placement was completely unacceptable and therefore ceased advertising with the Daily Mail with immediate effect.

Some of the UK’s biggest brands are under pressure to stop advertising in the Daily Mail and Mail Online.

Brands such as Jet2, Calvin Klein, Quorn and Natwest have all had their brands advertised next to or under the content on the web version of the newspaper

THEGAYUK.com reached out to the brands concerned for comment.

How much has Richard Littlejohn cost the Daily Mail?

The Daily Mail was urged to fire Richard Littlejohn by over 200,000 people in 2013 after a piece he wrote “monstered” transgender school teacher, Lucy Meadows, who sadly committed suicide shortly after her transition.

StopFundingHate a UK pressure group whose campaign focuses on changing the media via its advertisers have called upon Quorn, Natwest, Visa and VisitNorway to answer on whether they were happy that their brands were effectively funding the content on the MailOnline.

Speaking to THEGAYUK.com StopFundingHate said, “Many customers of Jet2 and Calvin Klein will be deeply disappointed to see them funding this divisive and disheartening article. Yet again we see that the Daily Mail is increasingly out of touch with the views of mainstream British society. A recent YouGov poll found that 58% of people believe that “companies should withdraw their advertising if it is placed next to content they think is racist, sexist, homophobic or xenophobic”

“Brands can easily prevent their ads from appearing on the Daily Mail website by updating their Google Adsense settings or speaking to their media agency”.