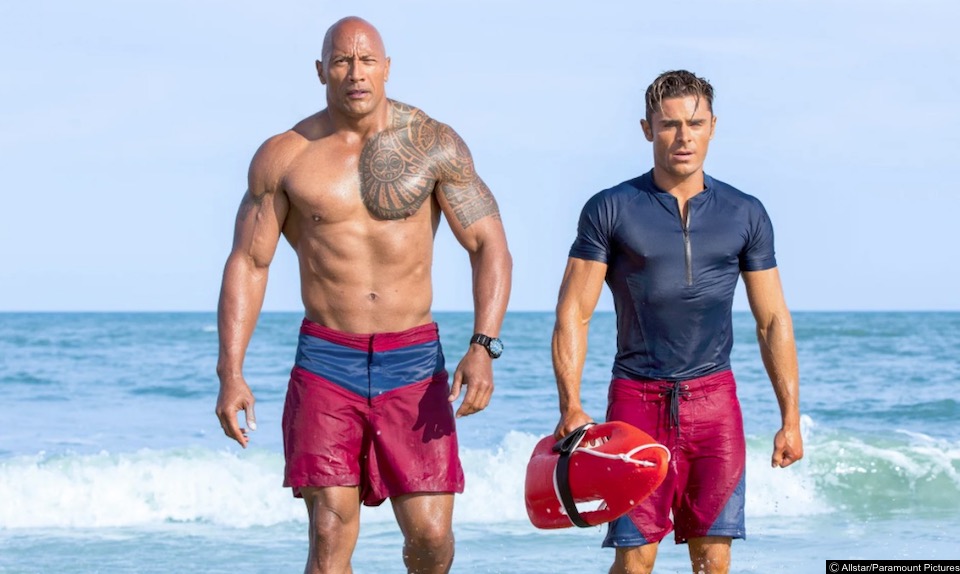 Nutshell – Dwayne The Rock Johnson is the superstar lifeguard who has to put up with a cocky new recruit fallen Olympic swimming medalist whilst trying to solve a drug ring threatening to take over his beach. There is lots of male and female flesh on show, plenty of action beats, adult humour and stonking music plus appearances from all the TV show stars. It’s great time wasting fun no more no less.

Tagline – ‘Don’t Worry Summer Is Coming’… fans will get it.

THEGAYUK Factor – REALLY – we mean REALLY???, two of the hottest men on planet earth topless for two hours and backed up by some of the hottest studs in minor roles. The highlight should be a very sweaty Abs and muscle packed strength competition between Dwayne and Zac but actually, we had more trouble getting by Zac’s gorgeous blue eyes – oh they are so deep and blue!

Key Player – This is The Rocks movie and although it is only partly successful it would really flounder without him. As always he can handle the comedy, action and acting with equal ease and boy is he easy on the eye for those into muscle and wait until you see the huge bulge in his trunks here !!!!

Budget – $69 Million. It opened disappointedly on $18m but then jumped to $43m – It will clearly make a nice profit but maybe not the cash bonanza hoped for like the similar 21 Jump Street series.

Best Bit – 0.35 mins; After the muscle-bound face off referred to above we instantly get a quad bike beach chase which is pretty thrilling with a great 360 degree shot it makes you think this movie will be superb….it’s not.

Worst Bit – 0.42 mins; Anytime when the baddie on screen is a low point – she is about as threatening as Jeremy Corbyn with a nuclear button – we need less of her and more of The Rock.

Little Secret – The Rock is the tenth professional wrestler to act in Baywatch as the TV series included the likes of Hulk Hogan, Shawn Michaels and Randy Savage. Pamela Anderson really did not want to appear in the film and only agreed to a non-speaking part. All the abusive boy band names Johnson’s character calls Efron’s throughout were given to him by Zac himself including calling him ‘High School Musical’ the film that made Efron famous.

Any Good – The ultimate OK movie – nothing wrong with it but nothing spectacular either, one thing is for certain this should have been better. The characterisation is great and you root for the whole life-saving team so credits for the casting, but why is the baddie so camp like a Joan Collins, Dynasty pastiche. You wont want your money back but you wont be talking about it later either. Disappointing