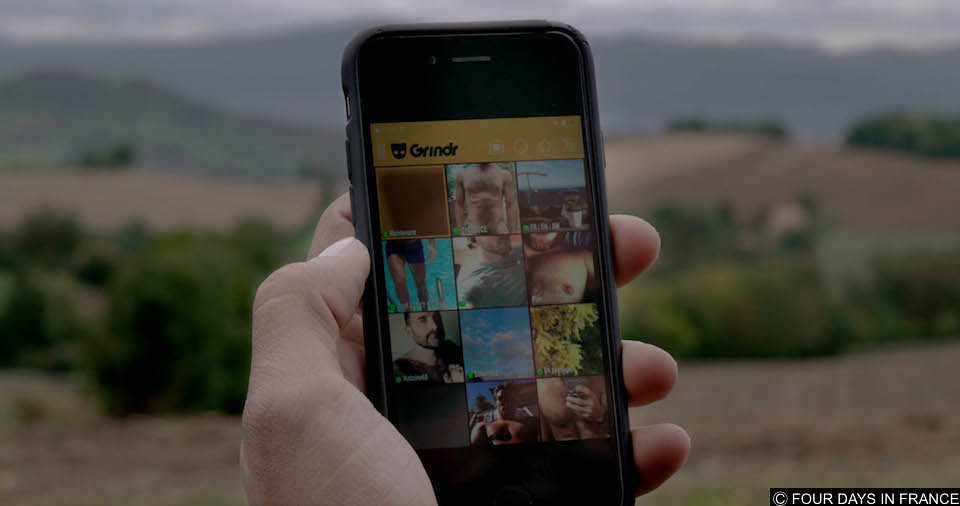 One man uses the app to find his missing partner – in the middle of France! I can’t even find a shag in my own neighbourhood much less find someone in the middle of nowhere. But that’s the premise of this film, very far fetched and not quite durable.

Pierre (Pascal Cervo) up and leaves his partner Paul (Arthur Igual) in the middle of the night with no explanation whatsoever – he just gets in his car and heads out of town. Pierre drives and drives and drives and uses Grindr to hook up with various men along the way – to nowhere.

He also encounters all sorts of people, including taking a man’s photograph on the very snowy border between France and Italy, is then yelled at by a woman who is tired of gay men using her neighborhood as a cruising area, and a much older man who refuses sex because Pierre smells (he’s been sleeping in his car). What is Pierre’s motivation for doing this?

This very long 127-minute film doesn’t give us a clue. Paul, meanwhile, is hot on the trail looking for him and narrows his search by using Grindr. It’s only a matter of time (a very long time) until the predictable happens, but before we are expected to believe that they both picked up the same woman on the side of the same road and had the same conversation with her (she tells both of them that they look depressed), and that Pierre goes out of his way to deliver a package to a woman who lives high up on a mountain because one of his shags asked him to do so. Really?

Writer and director Jérôme Reybaud really tests the viewers’ endurance as some of the driving scenes are way too long and this film could’ve been cut by at least 45 minutes. It’s a bit of an indulgence that Reybaud puts us through this journey, it’s a journey that’s very unbelievable and the payoff it not even worth it. And while there is only one hot hookup in the film, it may be better that you spend your time looking for sex in the middle of France, because according to this film there are lots of lonely and sexually frustrated men there, and all are on Grindr.