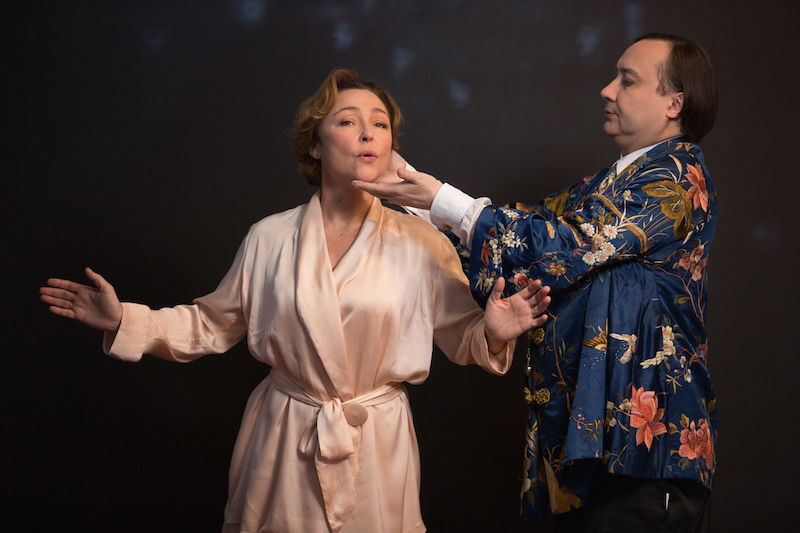 An aristocrat who thinks she can sing but really can’t is the new French film Marguerite. Marguerite is played by delicious French actress Catherine Frot. She’s a very wealthy woman in France in the 1920s who lives in a huge mansion with her husband and several members of her staff. She loves music and the opera, and loves to give small concerts and parties in her home. She’s a woman who has it all, except for a great singing voice.

She has always yearned to be a singer, and she takes it upon herself to sing at one of her parties, right after the performance of young woman who has the voice of an angel. Once she opens her mouth and sings, the crowd winces, holds their collective breaths, and pretends to enjoy it, then breaking out in furious applause when she’s done (at the insistence of her attentive servant Madelbos (Denis Mpunga). Of course no one would tell her to her face that she can’t sing.

A young journalist (Sylvain Dieuaide) decides to write a rave review about her (only because he’s looking for a rich benefactor), and Marguerite starts to believe that she really can sing, and so she wants to follow her dream – to perform in front of a crowd.

Her husband Georges (Andre Macon) wishes that she won’t go through with it,though he won’t tell her to her face but he does tell his mistress. Marguerite is so determined to put on a concert that she hires opera performer and singing teacher Atos Pezzini (a very good Michel Fau), along with his staff of five, to get her voice ready for the show.

But it’s them and the rest of the house staff who have to suffer, for every time Marguerite opens her mouth to sing, they cringe and put in ear plugs to drown out her awful voice. Will Marguerite ever realise that she can’t hold a tune? Will anyone in her circle tell her the truth? It all comes down to a hilarious unexpected ending.

Marguerite is an uproarious comedy about a woman’s desire to follow her passion at any cost. The film combines pretty visuals, set design and costumes, a funny script, and an electric and funny performance by Frot.

Director Xavier Giannoli has crafted a film that, while a bit too long and with a couple storylines that go nowhere, is sumptuous and funny. ‘Marguerite’ is loosely inspired by the life of amateur operatic soprano singer Florence Foster Jenkins, soon to be a movie directed by Stephen Frears and starring Meryl Streep to be released later in the year. ‘Marguerite,’ featuring music from Mozart, Bach and Vivaldi, is a true French film – dramatic, gorgeous and funny.