Hand Luggage With A Difference, reviewing the Brompton Bicycle 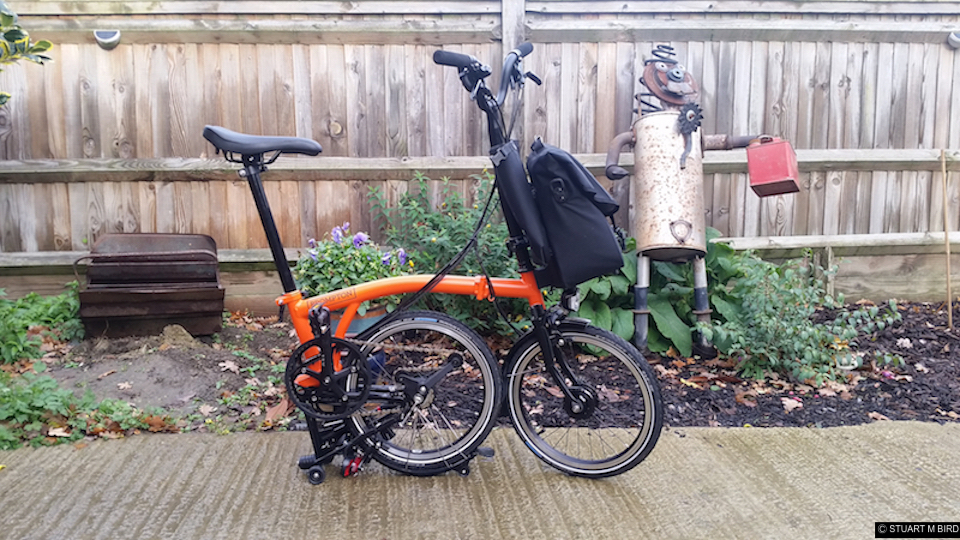 Now that 2017 is out of the way and those new year’s resolutions that sounded so promising at 00:03 on January the 1st 2018 have all but faded we now need to look at 2018. What better way to kick-start a fresh fitness regime in February than on two wheels.

There is a lot of buzz about the London built Brompton bicycle. Everyone who owns one loves them. Some people have more than one. It’s almost as iconic as the Fiat 500 or Citroën 2CV.

The one we have for testing is the H6L Black Edition with an orange main frame. Made with various components painted black for a sleek urban look, it is available, in a choice of four colours and only available at selected dealers worldwide.

For its £1340 asking price, you don’t feel like you get much for your money. To be fair I choked a little on that myself. It was only when I started using it that I discovered that it makes for good value for money. The most obvious plus is that you can take it with you almost everywhere. It folds neatly and can go under the table. And at 12.3 kg, it is hardly weighty. In simple terms, it’s 12 bags of sugar or two of my nieces at birth.

Seems I am a little out of touch with bicycle purchasing these days. The last time I bought one back in 1996 it was a red mountain bike, 21 speed, alloys. Done. The Brompton has an options list to rival that of the Jaguar XF, well sort of. These bicycles are not your standard run of the mill ‘off the shelf’ at your local bike shop variety. Buy one from eBay and what you save in a few pounds you lose in personalising. For me buying a Brompton would be personalising it for me. It’s a personal purchase.

The bonus of the Brompton is its folding ability into medium sized hand luggage. Folding bikes are not new. However, the way the Brompton folds up makes it ideal for the city commuter and for those with limited space. It means you don’t have to leave it locked up at the train station where inevitably you’re likely to get bits removed or worse still, the entire thing stolen, meaning you have to walk home alone in your spandex.

The actual folding is genius. If you believe the joyous craziness of Anna Rampton played by Sarah Parish on BBC 1’s brilliant W1A you’d be thinking it was a feat of high IQ just to fold it up. In actuality it is no more than a tug, two clamps, an unfold and a pull. It’s all mainly down to the seat post that holds it all together, absolutely, yes, genius, no, there we go. Amazing. In a W1A kind of way.

I was so exciting taking it out of the box for this review that I almost forgot that I had to ride it. Now here comes the crux of the problem. I’ve not ridden a bike for about four years. Admittedly you don’t forget how to ride one. What you do forget is that it takes lung capacity and leg power to make the thing go forward.

After the initial “oh my Christ my LUNGS”, shock and getting past the first ‘burn’ it is actually quite easy to ride. Far easier than my 21-speed mountain bike. Over the course of the week doing around 4 miles a day, I got better and better. The 6-speed gear option for £175 is money well spent. There are two, and 3-speed options and should your commute be based in central London then the saving of £70 might be advisable. As it is, I have various degrees of terrain where I live so the six was more than ideal.

The gears consist of three main gears in the rear Sturmey-Archer hub with an extra choice of two on the geared cog making it 1-3 and 4-6. I found 2 and 5 were best suited to me with one being more than ideal when I wanted to be both lazy and slow. It’s mostly suited for hill climbing.

Other options abound include splash guards. I do recommend the large £55 set. They did a great job in preventing mucky spray up my back and over my trainers. Riding through puddles was quite fun. Just watch out for those potholes. The one Achilles heel is those small wheels. For all their benefit of manoeuvrability tighter than a London Taxi, they are somewhat susceptible to jolting you when you hit the pots. Thankfully its seat is quite well padded and cushioning of one derrière. You’ll be surprised at how much energy is wasted with a seat that is too soft. Your thigh muscles altering all the time make for early fatigue.

There are 13 different types of bag to go with your Brompton. I was sent the reflective O bag for £220. It’s an expensive option I’ll grant you. Cycling shouldn’t just be for health and commuting.

It is immensely practical and big enough to carry more than you’ll need for a picnic in the park. I managed to load it up with all I would need for a party in the park. When it comes to storage, this bag was like that of Mary Poppins. It also doubles up as a shoulder bag with two open pockets to the side. Ideal for quick access to refreshments or baguette carrying.

With all the personalisation that you can spend on the Brompton, I do have one problem with it. Ergonomically their set up might be for the best but I for one like my brake levers just a little more horizontal. To do this will prevent it from folding up and besides, there isn’t enough slack in the gear and brake cables to allow this. The folding tolerances like the build quality are tight and precise.

It’s nicely put together and the skill and engineering that goes into each and every one made shows this is more than just a posh bike with a designer price tag.

The Brompton will never replace the mountain bike. The Brompton isn’t designed to do that. It does make for an ideal city tourer bicycle. It’s difficult to explain this next bit because it doesn’t take much effort to propel it forward. It’s quite relaxing to use and this makes it ideal as a work commute machine. Nothing worse than getting into work with a sweat on. It might not, however, fit under the boot of your midlife crisis sports car as I discovered, though it will fit into the boot of any hatchback so there is no need to fit a boot suspended bike rack.

I’m sold on the idea of the Brompton. It’s small storage requirements are a boon. It fits into your life quite easily. There is even a good network for spares and repairs and a huge cult following. It doesn’t take long to get to know others with one. It’s just that price tag I have a slight problem with. If they were that cheap however then everyone would have one.

Oh hang on, they do. And that tells you something. They really are THAT good.