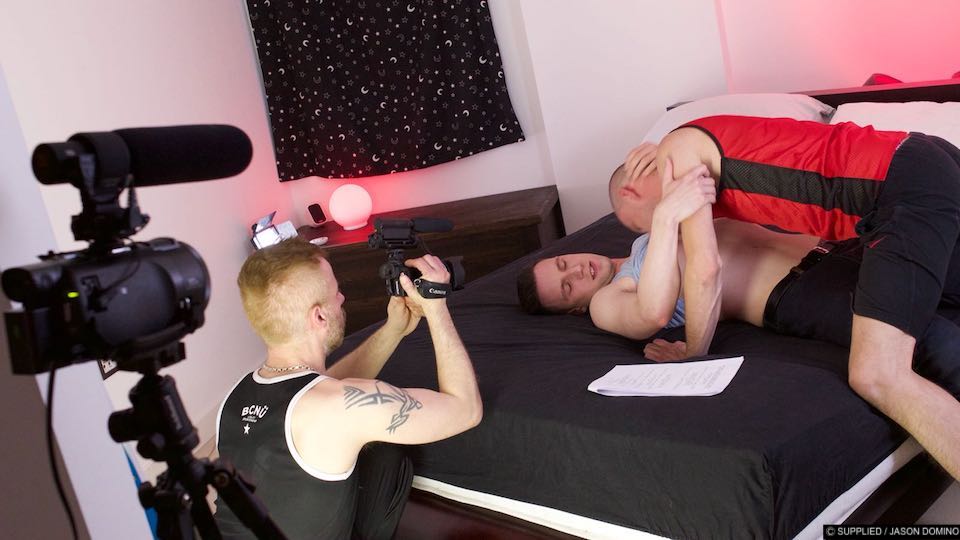 Charity founder Jason Domino has spoken at the United Nations, on primetime BBC News and featured in articles for the New Scientist, Huffington Post, and Dazed. His advocacy in the UK earned him a spot on the “IMPACT” PrEP trial’s advisory board. Jason lives as a public example for sexual health, a VERY public example…

“For a Sexual Health film, I had sex without a condom, with someone who has HIV. They were off medication and had a high Viral Load. I haven’t contracted HIV. I chose to do this to reinforce confidence that PrEP works even in “high risk” events. My scene partner was about to try his new medication and had a high Viral Load at the time. Rather than encouraging people to be irresponsible, our aim was to highlight rigid attitudes and to educate. We wanted to stop people being so reluctant to talk about HIV and missing out on important major updates in HIV information.

“That is the problem in a nutshell; people don’t talk about Sexual Health and yet, think they have the most up to date information about it. A few weeks ago I was taking in an UBER home from a night out, and I told my driver what undetectable meant. He then told me, in floods of tears, he had an aunt with HIV, he rejected years ago. He cast her out of the family in case they caught HIV from her, telling her to pray for healing. We pulled over, and I told him modern medication meant, people living with HIV could have long healthy lives, and once undetectable for six months, they could not pass on HIV. We went through the different ways it could be passed on and what preventions existed. I then sat there, as a grown man I barely knew called his estranged aunt for the first time in five years. There were many sad and happy tears.

“I’d love to say it felt great. It didn’t; it just hurt that people were ever stuck in that situation. It was just a reminder how much people are afraid to talk about things like HIV.

Finding condoms comfortable or not, is an immature attitude to an important conversation

“I work a cabaret a few nights a month. For weeks now I have been suggesting an idea for an act. A sexy act that features a zombie and his distant lover finding a renewed closeness after a fairy/nurse gives them some pills. It then turns into a shocking zombie flesh throwing couple strip. They end up seeing each other as equal partners. The last part is not the part the cabaret disliked; in fact, they loved the gory strip. The cabaret saw right through my plan to integrate a constructive message about sexual health, into a sexual space. I have rewritten it a dozen times, each time rejected. When did sex and sexual health become so distant? In real life, they are unavoidably married. In current culture, sex is only palatable isolated in its own fantasy. Only when permitted to speak transparently about sex we can bridge into sexual health, even if only as a casual detail. Sex is an inevitable part of our lives that is seen daily in advertising, and in cases like my own, in work too. Being squeamish talking about, e.g. finding condoms comfortable or not, is an immature attitude to an important conversation. It is much more common to see sex communicated subtly with images and inferring details, than discussing it directly. Subtly praising sex is socially acceptable, but our windows to talk and listen about sexual health are limited and unattractive. They are however two sides of the same coin.

“The fact that we can’t talk about sex transparently is people sticking to their comfort zones, often embarrassed to revealing their personal sex life.

“Many things are hard to do without practice, but most things that can save someone’s life get the man hours put in. Last year I was a victim of my own assumption. I thought I was completely up to date on my sexual health information, but I wasn’t. I am a man, and like the majority of sexually active adults, I had contracted HPV. Most adults don’t express symptoms, or only do when their immune system is running low. Many men don’t even think they can catch HPV. HPV is a collection of around 100 strains of a virus, some cause genital warts, and some lead to cancer. In the UK girls are vaccinated against the worse and most common strains of HPV on the NHS. Boys are not, but it does work for boys. As I lay on the operating table going under general anaesthetic for surgery, I wondered why no one offered me the vaccination. It existed, but no one was comfortable talking about it. A laser burned 360 degrees inside me, and I spent a number of months on tramadol feeling like I was giving birth every time I went to the loo.

“I am doing ok now; I look healthy down there. But I will always carry HPV, like many. But I’m aware now. I will need regular checks to detect cancerous changes, and I need my partners to either be unaffected or be vaccinated against it.

Abstinence and condoms is an embarrassingly basic prevention lesson.

“I talk about sex a lot. Some say too much, and that it isn’t a subject worth dwelling on. I am then unsure they understand why I talk about it, which challenges me to talk more. Attitudes towards sex are perverted. In other aspects of life, we praise learnt wisdom, but we hide sex behind a veil. Praising virginity as opposed to sexual wisdom. We don’t do this for other elements for good reason; celebrating a naïve state encourages vulnerability and reduces learning motivation. Why should sex be any different? Sex isn’t such a big deal that we can’t chat about it. It can be difficult at first, but by sharing information we can all be wiser. If you care for children you’d want them prepared rather than vulnerable. Abstinence and condoms is an embarrassingly basic prevention lesson. Awareness of treatment options is equally important, along with many other elements like on-going consent and communication.

“Context Dependent Memory is a psychology principle placing value on the situation a learner is in. There is up to a 50% decrease in recollection of the information with changing scenarios, environments and emotional state changes. An example of this is the Divers Study, divers were trained to know how to fix an oil rig. They dived to the repair site, and all divers forgot their training. They remembered it again once surfacing. Eventually, divers were trained in a submerged environment; they had better success. When it comes to teaching about sexual health, principles like this, are completely ignored. A Sex Ed class is often awkward, formal and largely danger-focussed. Sex in real life is about pleasure, excitement, feeling turned on, and sometimes anxiety. If we take the subject seriously, then students deserve a more effective way of educating them. It is the reason I started a unique charity. My charity makes porn, and soon Erotica, both contain seeds of sexual health information. A skilled director or writer can integrate these messages without throwing the piece off topic. Many people can’t even imagine the two being compatible.

We don’t need to put sex on a mysterious plinth.