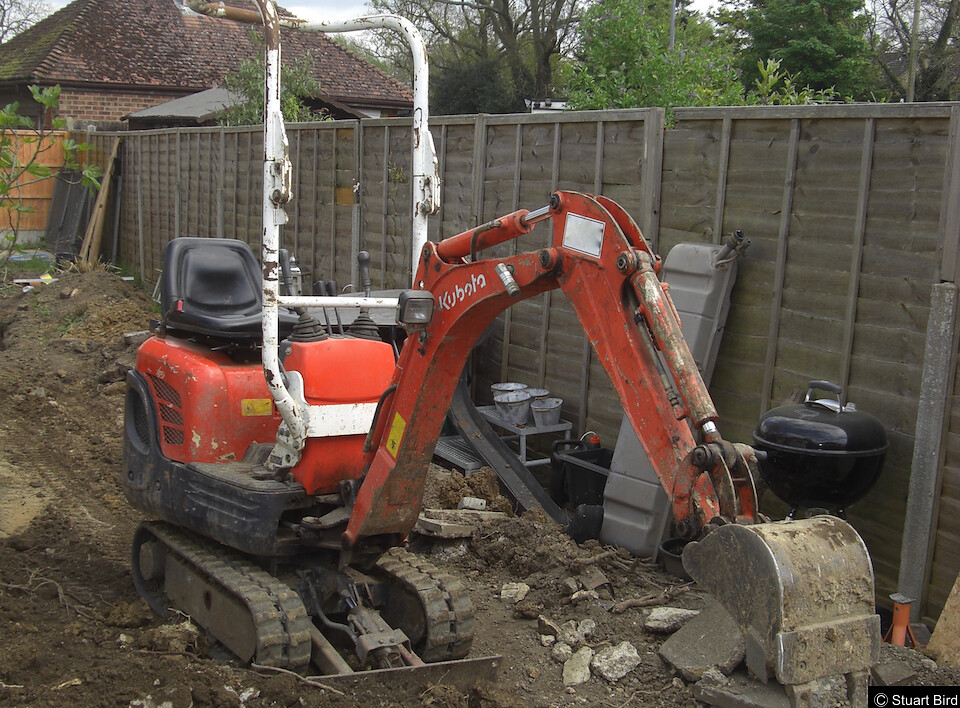 Boys will be boys they say and that saying is still applicable now even as we get older. When we were young we had thrust upon us the football to play with, expected to fix a puncture on our BMX and we were given a toy digger.

There is something about a digger that was always so macho to me. A simple machine that men used to dig things and erm, dig things. Having watched a lot of Dempsy and Makepeace in my childhood (who didn’t have a thing for Michael Brandon?), used by bad people for all sorts of things outside of digging.

A man friend of mine called Dave was doing some excavation work at home in preparation of a garden makeover with a difference. He said I should come round and try this new toy he had hired for THEGAYUK. It was in his words “BRILLIANT”

Not to be put off from getting one’s hands dirty, I donned a hard hat, butch boots and a hi-viz vest. All totally pointless in a private setting with no foreman but I wanted to experience the Kubota K008-3 appropriately attired. If it meant having to don a bow tie, I would have.

The machine looked simple enough. To help with weight-saving there were no doors fitted and the cabin was sparse. In fact, it was more sparse than the recently tested Abarth 695 Bisporto we tested. Thankfully money has been spent on a comfortable seat. Good really considering you could be here for quite some time if you decided to travel the length of a modest garden in suburbia.

Start up was simple. Turn the key and the little diesel engine spluttered into life. It was very quiet as it powered up hydraulics and gave it enough gumption to propel itself forward on rubber caterpillar tracks to a top speed of about walking pace. Once that is you had mastered the controls. there were 6 levers and 2-floor pedals. Quite different from the Britains toy digger I was given at 4!

We were still not quite sure what the pedal on the left did. Possibly throttle. It didn’t give much of a clue. Like a Toyota Hilux, this thing can still work while being broken. The pedal on the right moved the floor shovel and stabiliser up or down.

The two big levers did the magic bits to the digging part. Left lever swung the arm left or right. It also moved the arm furthest away from you up and down.

The big lever on the right moved the arm closest to you up and down while also opening and closing the bucket. have you managed to grasp all that?

If you have then you’re better than me. If I was at the 02 arena on stage to Kylie singing then I’d have looked great. I’d spin left. I’d spin right. I’d move the arm up and out. It was “Traveling Light Years” meets “Spinning Around” I span around and it felt really fast. I’d attempt to dig some soil but all I could manage was no more than the amount you’d get in the bucket you keep under the sink. However with perseverance, trial and many errors, I managed to better than a bucket of mud. I’d managed about three.

Dave made some suggestions on how to get the best out of the Kubota K008-3 but to implement those into someone with undiagnosed dyspraxia was going nowhere. I say dyspraxia but if truth be told, I’m just kack-handed.

So we carried on some more, trying my best not to fall down the trench he had already dug, Safety first for the Kubota driver is a lap belt and a roll cage over the front. With no seat belt alarm going off, I decided to drive by the seat of my pants albeit hard-hatted like the construction worker of the Village People.

Once I had managed to feasibly master the controls I was let loose with the performance of the engine. The middle levers do the forward and back motions. Forward for forward and you get the rest. What you needed to be aware of was that both levers have to go the way you want to go. You won’t snap your neck on the breathtaking 0-walking pace speed but you might when you want to turn left or right. It’s reverse of what you actually want to do. For my kack-handed ability, this wasn’t a problem.

It was fun, it was dirty. It separates the men from the queens. I think I’ll stick to driving pick-ups for my macho kicks and leave this digging lark to the real men. Now, where is my Britains digger?? I’m going to make a hole for a daffodil bulb.

You can dig up things
Many different attachments available
Quiet operation