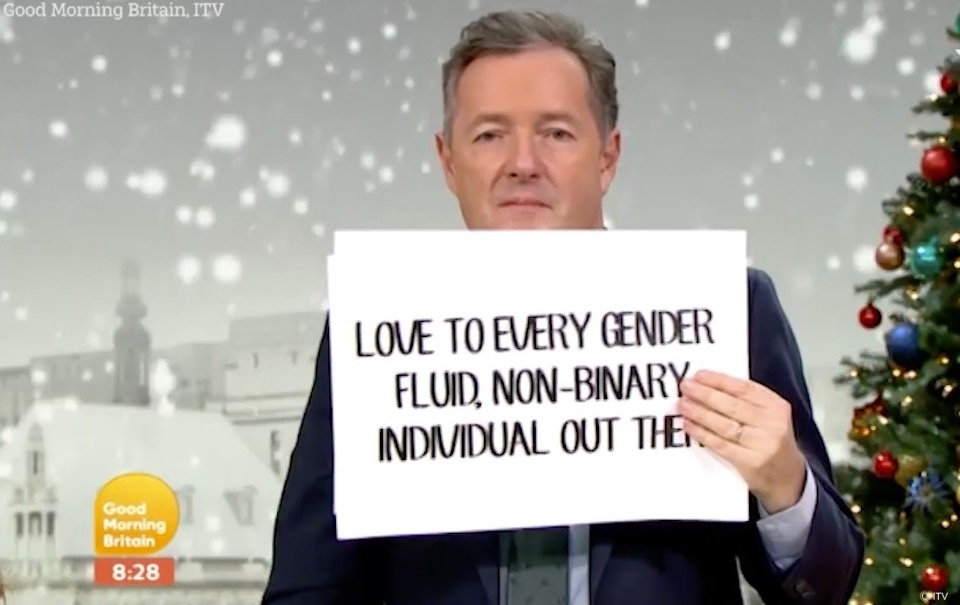 In the last Good Morning Britain of 2018, Piers Morgan wished a Merry Christmas to non-binary and genderfluid people. Piers who has been critical of the non-binary activists in recent years, was showing off pre-written cue cards in homage to the famous Andrew Lincoln Love Actually scene, where the actor holds up cards explaining his true feelings to co-star Keira Knightley.

On one of the cards that Piers holds up on the ITV morning show, “Love to every gender fluid, non-binary individual out there, Merry Christmas” was written before the punchline, “P.s. BBC Breakfast Sucks”.

BBC Breakfast is a competing show on BBC One.

Seemingly a genuine gesture, Piers holds up a card acknowledging the Gender Fluid and Non-binary community.

Earlier this year the presenter went on a tirade against Children’s TV presenter, 20-year-old Catie Munning, who was speaking on her CBeebies show, Catie’s Amazing Machines when she said, “snow is amazing. You get to build snowpeople and go sledging.”

Piers, who has consistently railed against gender non-conformity ranted, “You don’t build snowpeople, you see, you build snowmen, we’ve been building snowmen for 10,000 years”.

In 2017 Piers was being criticised for the way he handled an interview with a couple who identify as non-binary. The couple, Fox and Owl were being interviewed on Good Morning Britain on ITV. You may remember Fox from Channel 4’s My Transsexual Summer.

The interview was dubbed “inanely cruel”, disrespectful and “ill-formed”