REVIEW | Lindsay Kemp: My Life and Work with David Bowie 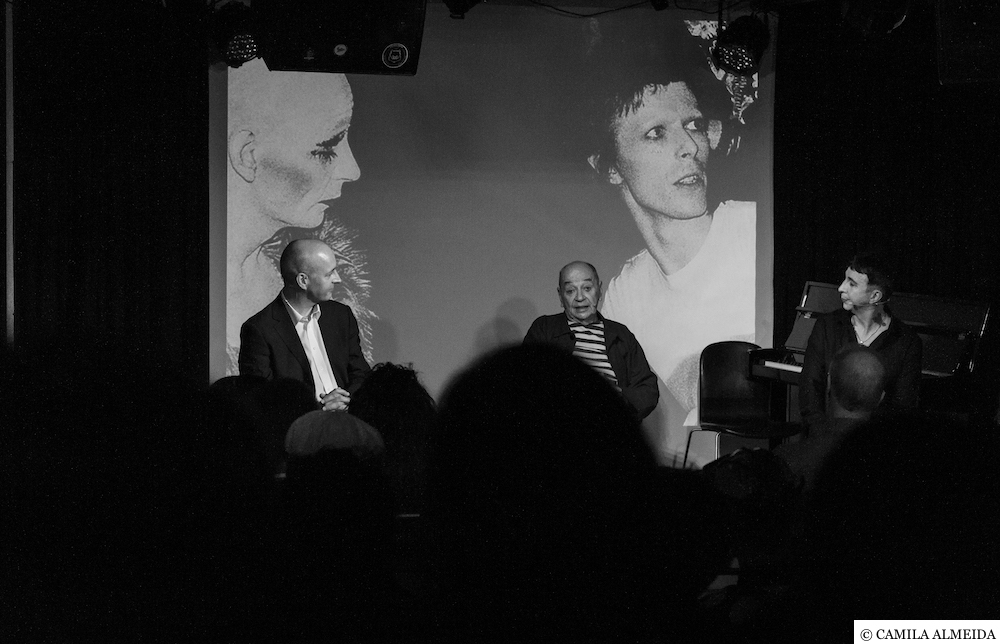 REVIEW | Lindsay Kemp: My Life and Work with David Bowie

★★★★★ | Lindsay Kemp: My Life and Work with David Bowie Interviewed By Marc Almond British theatre, too often, is like the Catholic Church – full of fawning reverence for one-note deadbeats. Take Laurence Olivier. Sure, the guy’s voice was beautifully modulated, but his delivery, always, was so ridiculously clipped, precise and cold it sounded phoned in from the morgue. Olivier, somehow, always rigorously excluded emotion from his roles, which, if technically brilliant, never prompted tears or tore at listening heartstrings.

That’s hardly the case with the stunningly emotive Lindsay Kemp, arguably British theatre’s most criminally under-appreciated genius. Taking English reserve by the throat and making gorgeously perverse, tenacious love to its’ dreary expectations, Kemp’s a singular and unlikely Messiah of the marvellous.

Outside, the pavements are crammed with adoring disciples eager for Lindsay’s first, London appearance since 2002, a celebration hosted by Marc Almond and Nicholas Peg. It’s completely deserved. For readers unaware of his legacy, Lindsay completely bulldozed theatrical tedium worldwide with a raw, radiant sexuality more relentlessly beautiful than a gay Sistine Chapel.

The shows – Salome, Flowers, The Big Parade and many more – are landmark theatrical legends, but Lindsay, oddly, is overlooked by today’s crushingly ordinary theatre industry. That’s their loss, and probably, prompted by envy and the inability to market Lindsay’s fabulous, unrestrained genius as a guaranteed cash-cow. Still, tonight, the Ace Hotel is bursting at the seams with stellar talents frantic to lionise Lindsay on his own terms, discussing his own life and Bowie anecdotes.

Firstly, there’s the enigmatic, irrepressible and outrageously entertaining Ernesto Tomasini, who – in a nod to tonight’s Bowie reminiscences, delivers soaring, falsetto takes of ‘Starman’ and ‘Threepenny Pierrot’. Then, there’s a huge, spontaneous rush of mass goodwill as Lindsay himself holds court, informally urged by a hugely appreciative Marc Almond and Bowie expert Nicholas Peg. If one measure of judging an artist is his influence on others – as Dali, arguably, inaugurated everyday surrealism – then Lindsay’s pivotal influence on Bowie, Marc Almond and countless others speaks volumes.

So no wonder David Bowie came running to study at Lindsay’s bewitching feet. Inevitably, they became involved, with Bowie co-starring in ‘Pierrot In Turquoise’, an early Kemp production, but Bowie’s ferocious ambition and libido proved too volatile for sustained collaboration. Ziggy Stardust, of course, stands as a permanent, world-changing monument to their later, final teamwork, but the focus, tonight, is on Lindsay’s beautifully idiosyncratic memoirs.

He’s shocked, visibly, at how London’s changed, and even his hugely typical generosity of spirit can’t mask that regret. “I ventured into Soho, but it’s changed a lot, they’ve ripped out the wickedness. The bohemians are gone and there’s no danger, it’s very dull’. His own recollections, however – effortlessly summoned from a seemingly bottomless well – are gold-standard outré, a train-wreck, incest child of Picasso and Fellini. “I especially miss…  Miss Martinez (an exotic princess who danced in Soho, to the music of Ketelby’s) who always danced with a stuffed peacock on the streets…”

Never remotely deflected from embracing his inner misfit – even by a vicious matron nicknamed ‘Frostbite’ at school, who scrubbed his face free of amateurish make-up with Vim(!) – Lindsay adored early 60s London. “Back then the city was glorious, liberating, and we definitely thought we would change the world – and we did, for about ten minutes!”

Unsurprisingly – as a seriously conspicuous, de facto head of London’s rainbow demimonde – Lindsay was swamped with intriguing, if paradoxically low-profile offers. His small, cameo part is delightful in seminal, British horror flick The Wicker Man, but he didn’t warm to co-star Britt Ekland. “She was such a bitch,” he recalls, “I accidentally poured a glass of Guinness over her!” However, things improved with the arrival of a ‘fabulous looking girl’ on set. “She was Britt’s on-screen arse and knockers” Lindsay continues. “Britt was rather flattered…”

In incomparable, mellifluous form, effortlessly charming at the bat of an eyelash or droop of a brow, Lindsay barely slows for queries from either host. But he pauses, smilingly, as co-host Nicholas Peg announces an exclusive extract from event planner Nendie Pinto-Duschinsky’s upcoming, major documentary on Lindsay and his world.

Enthralling from the outset, it’s a bold, impressionistic portrait of a 21st Century pierrot – Lindsay himself – surfing the fabulous storm-surge of his own brilliance. Buoyed on an utterly uncharted, artistic tsunami, Lindsay’s drawn – and continues to draw – furiously devoted kindred souls in his wake. And, no matter how brief the contact, the fallout, often, is life-changing. ‘Timid Kate Bush’ for example, ‘became savage onstage’ and he taught Bowie “how to touch and reach and use stillness to communicate”. Difficult, you’d think, when Lindsay, partner Jack Birkett, Angie and David Bowie were all sharing the same bathroom, but brilliant, first impressions sanctify any downsides. As Lindsay so memorably describes his initial encounter with Bowie, ‘The door opened and it was the Arch-angel Gabriel!’

Now, exit lines don’t get better than that, but the night’s not quite finished yet. With guitarist Neal X, host Marc Almond – himself a consummate lyricist and globally eminent torch singer of the bewitching, beguiling and bizarre – unforgettably serenades Lindsay. There’s a pin-drop hush as Marc, quite exquisitely, renders Jacques Brel’s ‘Port Of Amsterdam’ and Bowie’s ‘Starman’ as ravishing hymns of exultation. And then, ratcheting the feel-good delirium even higher, singer Holly Johnson presents Lindsay with a glorious, floral bouquet.

Immediately, there’s an ecstatic, standing ovation from the host of gay celebrities present, as those of us lucky enough to attend remember one, unforgettable fact. There is true magic in this often dreary world, and it exists in two, simply enchanting words; Lindsay Kemp. Now and forever, the reigning Queen of gorgeous excess.