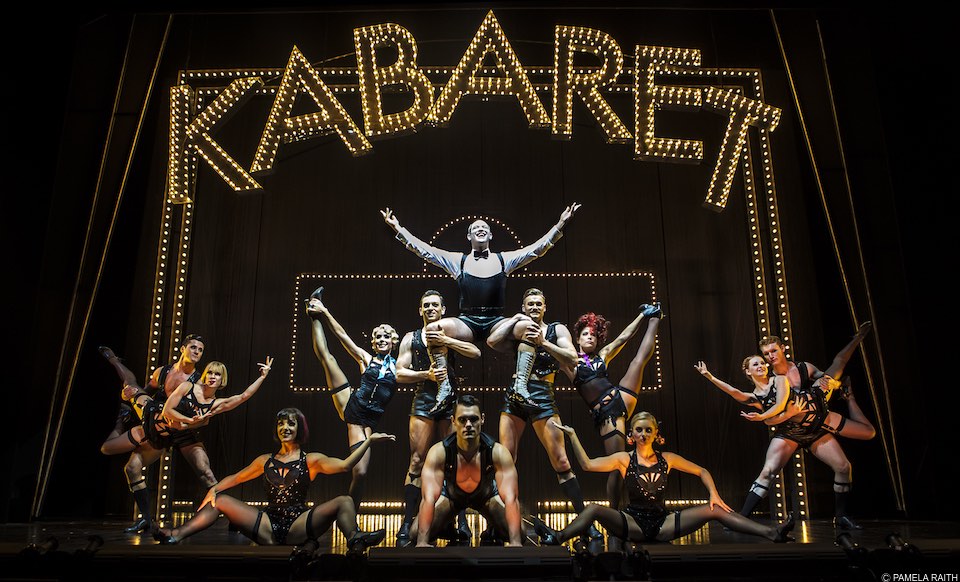 ★★★★ | On New Year’s Eve in 1938, American writer Clifford Bradshaw arrives in Berlin, and finds his way to the Kit Kat Club, a burlesque club hosted by the enigmatic Emcee, where the fluidity of sexuality, gender and sexual expression flow as freely as the gin. There he meets Sally Bowles, an excitable, if naïve, English woman, who performs at the club; and the two of them embark on an affair. But as the Nazi party rises to power, their friends both at the club and within the community find that their lifestyle places them all at risk as the nation starts to divide.

Starring Will Young and Louise Redknapp, this classic musical written by Kander and Ebb, needs very little introduction. Including the songs “Money Makes The World Go Around”, “Maybe This Time”, “Tomorrow Belongs To Me” and “Cabaret”, the show contrasts the bright lights of the carefree club with a story which has a surprisingly dark streak to it.

The first act is awash with exuberant musical numbers, performed in a classic burlesque style; with the stage glowing in gold and orange lighting, and with an abundance of scantily clad and ridiculously attractive dancers, showing off a plethora of muscular pecs, torsos and biceps. The indulgence and pleasure of the Kit Kat Club then yields in the second act to a darker and more emotional story as the rise of fascism takes hold, impacting on the free-living community of the club.

Will Young excels in his portrayal of Emcee; making his performance seem effortless and natural and injecting the role with just the right balance of humour, ambiguity and campness to be charismatic and alluring. His performance of the shows musical numbers is excellent, especially in opening the show with “Wilkomen” and in a haunting rendition of “I Don’t Care Much”. Louise Redknapp has her moments as Sally Bowles, and to her credit can belt out the show’s tunes, but her acting ability does not shine through and any stage presence that she may have gets lost amongst the charismatic cast; whereas Charles Hagerty provides solid and tuneful support in the role of Clifford Bradshaw

The show is well staged, with a beautiful cast, thoughtful and interesting choreography and an impressive lighting design. The set is relatively stripped back giving the whole production a feel which is not too dissimilar to Kander and Ebb’s other musical, Chicago. It is beautiful to look at and Rufus Norris’ direction keeps the show moving along nicely.

The revival of this production is timely, to say the least. With the recent resurgence in far-right political parties, the treatment of the gay community in Chechnya and with homophobic hate crimes reported to be on the rise, the show maintains a strong message about the impact of passivity and naivety to these issues on the gay community; a message which continues to resonate with audiences many years after the show was first performed.

Cabaret is currently playing at Leeds Grand Theatre until Saturday 28th October 2017, before continuing on its national tour, calling at Milton Keynes, Manchester, Edinburgh, Bromely, Dublin and Brighton. Visit the tour’s website for details and tickets.