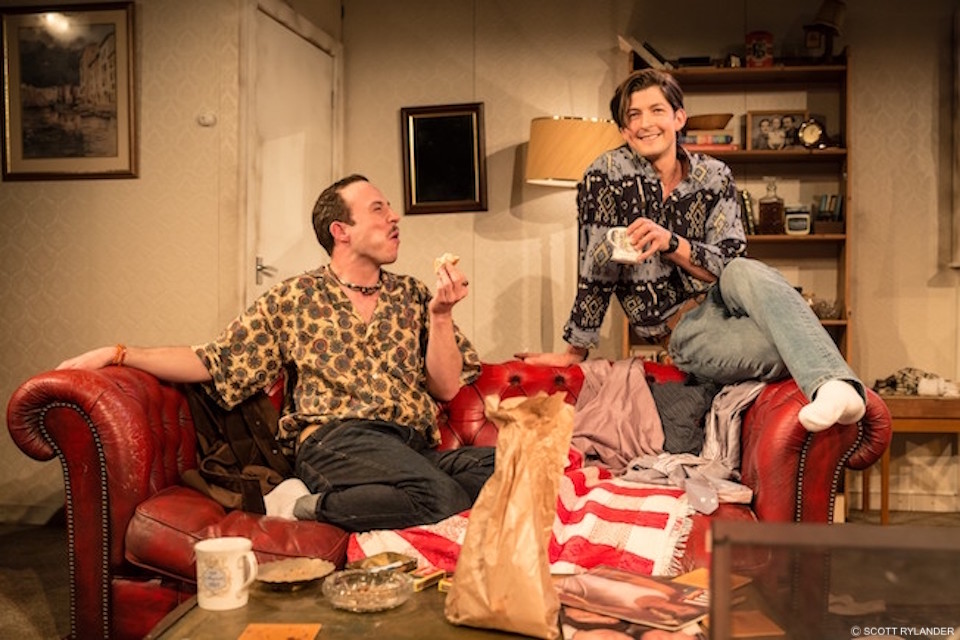 It’s an intimate stage that could double as a large living room (Trafalgar Studios), and it’s even more of a treat for those audience members who sit in the first row, as they get to be very very close to Lamberts’ bits. This show is highly recommended!

Before the late Kevin Elyot wrote his hit 1994 play My Night with Reg, he wrote Coming Clean (which opened in 1982). It’s now back in the West End after a recent successful run at the King’s Head Theatre.

Both shows deal with the trials and tribulations of being gay, and being in gay relationships. But where My Night with Reg had an AIDS backdrop, Coming Clean takes place during a simplier time, before the HIV crises and before gay men were dying right and left and centre.

At the heart of Coming Clean is the story of a bi-racial couple who, after five years together, obviously have issues. Tony (a natural Lee Knight) and Greg (Stanton Plummer-Cambridge) still love each other, but there is slight tension in the air.

Greg is a successful teacher and writer, while Tony is a not-so-successful writer who writes when he feels like it. And then there is their neighbour William (a fabulous Eliot Hadley), who is funny, camp and all so great to have around. But Tony needs more time to write, and says he doesn’t have time to clean the Kentish Town flat that he and Tony live in, so enter Robert (Tom Lambert), who is hired to clean for them.

It’s obvious where this biting play goes next, but it wonderfully takes us with it through sharp wit and extremely funny one-liners.

And Coming Clean successfully incorporates early 1980’s songs by, among others, Men at Work and Barbra Streisand (where her and Barry Gibbs voices on the song ‘Guilty’ are just like butter) to set the mood of the times.

The actors are all very good, with Hadley just about stealing the show (he comes back near the end of the play as a totally different character – think German Leather), and Knight looks very comfortable on stage.

It’s an intimate stage that could double as a large living room (Trafalgar Studios), and it’s even more of a treat for those audience members who sit in the first row, as they get to be very very close to Lamberts’ bits. This show is highly recommended!