THEATRE REVIEW | The Curious Incident Of The Dog In The Night-Time, King’s Theatre Glasgow 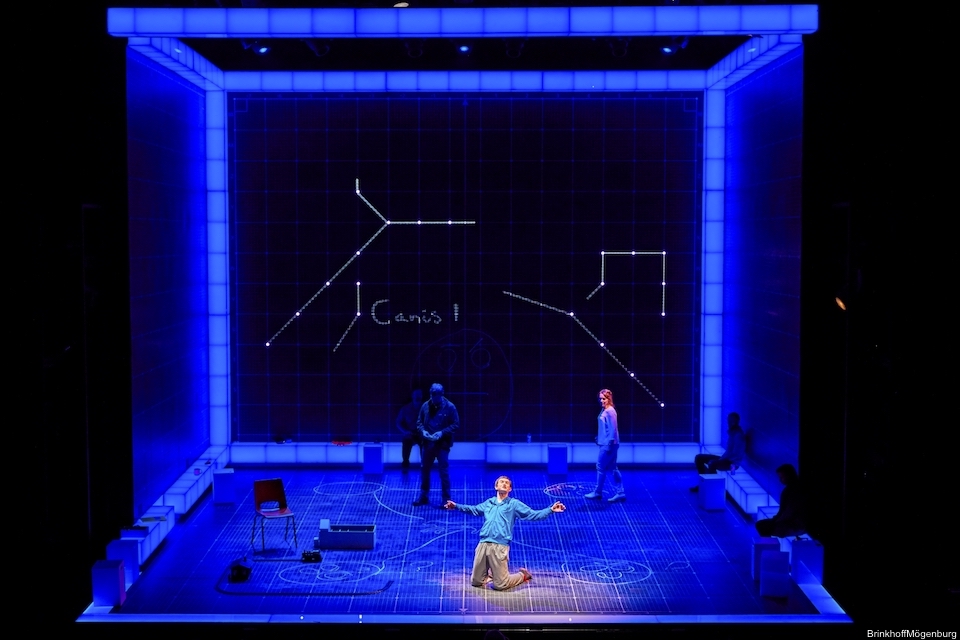 ★★★ | The Curious Incident Of The Dog In The Night-Time, King’s Theatre Glasgow

Christopher Boone, a 15-year-old boy, discovers that his neighbour’s dog, Wellington, has been killed by someone (the poor dog having been stabbed with a garden fork), and sets off to find out who the culprit is. But Christopher has Asperger’s syndrome, which makes his perception and functioning very different to other boys his age and as the truth behind Wellington’s death starts to be revealed, it leads Christopher to embark on a remarkable adventure.

The show is based on the hugely successful book by Mark Haddon and has been a West End and Broadway hit. Utilising a virtually empty stage, the presentation of the show was intriguing, using screens on the back and sides of the stage, almost framing the show in a cube, reflective of Christopher’s constraints in his functioning. Lights flicker like the firing of neurons in his brain, and black and white projections are used to show both his thought process and to set the scene. The show, like the book, is written from Christopher’s point of view and the presentation effectively places the audience members squarely into the centre of his mind and thoughts. The simplicity of the set is reflective of the way in which Christopher perceives the world and worked very well. There were pieces of carefully choreographed movement throughout, and the scene where Christopher arrives in London and is overwhelmed by the overstimulation of his environment is very well done. In this show, less certainly is more, and the monochrome set nicely mirrored Christopher’s rather binary thinking.

But placing the style and presentation to one side, the most impressive aspect of the show was the central performance of Scott Reid. Reid’s portrayal of Christopher Boone was highly accomplished – mixing the complexities of the characters personality, his physical traits and a childlike innocence which combined to provide a rounded and believable performance

The show, and in particular, the first act, is very well written, with a script which imports large chunks of text from the book to provide a faithful adaptation of the source material. Despite being bleak at times, the show was filled with gentle humour; and created a world with a myriad of characters that come in and out of Christopher’s life which nestle alongside the well-crafted moments of dramatic tension and emotionally powerful scenes.

The show has won a slew of awards, including 7 Olivier Awards and 5 Tony Awards, and it is easy to see why. There is a lot of depth to the play, exploring the adult world of interpersonal relationships through a simplistic and innocent perspective.