THEATRE REVIEW | Woman Before a Glass 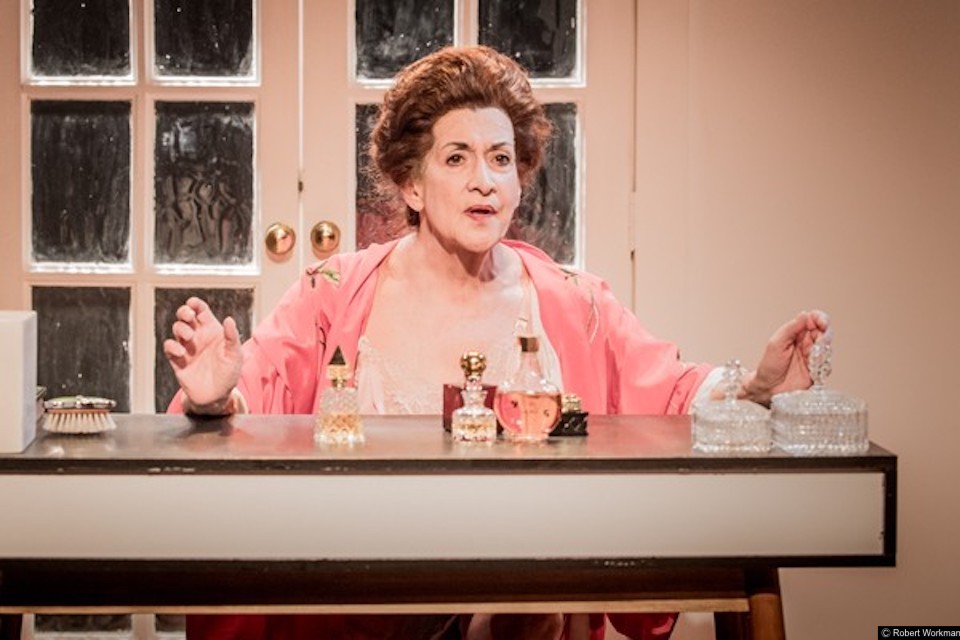 1960s Venice and Peggy is pontificating on the terrace of her palazzo with an arm full of designer dresses, wondering what to wear for a TV appearance. She’s in the mood for chatting and addresses the audience of the tiny Jermyn Street Theatre directly. Brash, vulgar and monstrous, she’s a vision of bouffant hair, free-swinging breasts and is mistress of the crude comment. Looking back at her life she stalks the stage, swigging gin martinis and smoking. She amusingly refers to numerous ‘fucks’ including a few of the local gondoliers and lovingly reflects on her modern art collection, spitting venom when talking about that bitch who her uncle married. Beneath the campy veneer of tasteless monstrosity, there’s inner sadness as she talks about her father (who drowned on the Titanic), her great love who tragically died and her troubled depressive daughter, Pegeen.

This is a tight script with the 90 minutes broken down into three sections. The character of Peggy is well rounded and thoroughly credible. At points, it’s a bawdy comedy but it veers towards tragedy as this strong woman regales us with her triumphs and troubles.

Judy Rosenblatt is nothing less than stellar and her Peggy is a force to be reckoned with. Whether you’re already a devotee of Peggy Guggenheim or sadly unaware of this colourful character, this is a performance worth seeing.