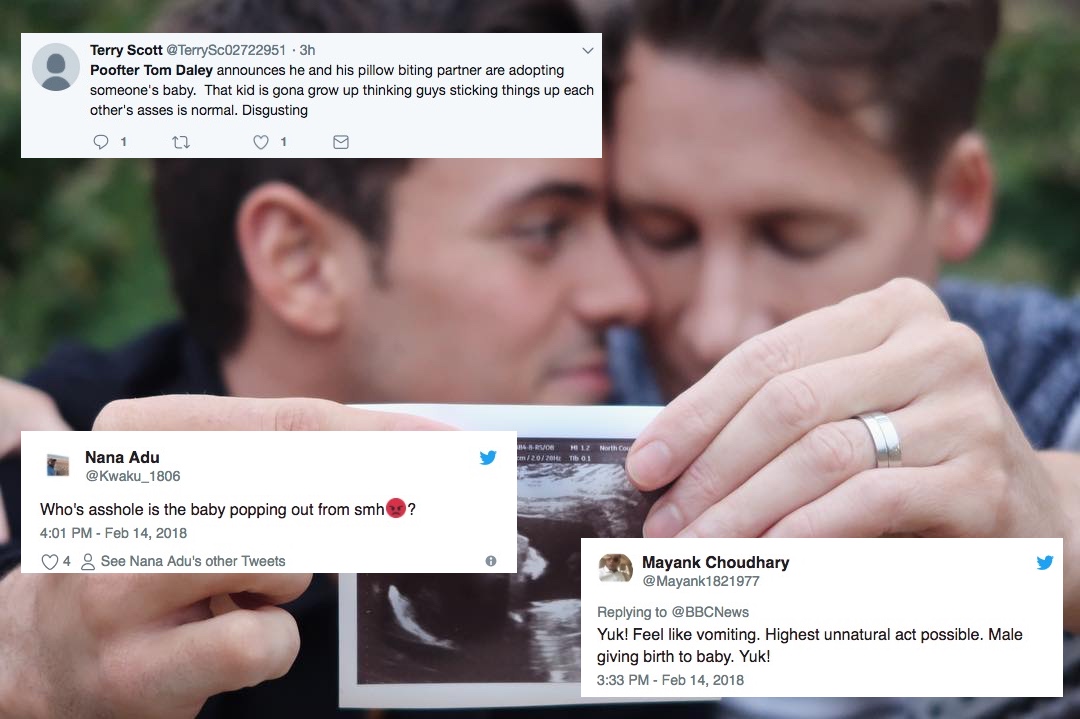 Moments after Olympic Diver Tom Daley and husband Dustin Lance Black announced that they are expectant fathers, the trolls come out in force.

Despite the news that Tom Daley and his husband are expecting a baby, some on social media couldn’t hide their contempt for the gay fathers to be.

Poofter Tom Daley announces he and his pillow biting partner are adopting someone’s baby. That kid is gona grow up thinking guys sticking things up each other’s asses is normal. Disgusting

So Tom Daley is having a baby with his husband ?? two men bringing up a child what a world we now live in! Nothing against gay people but this is too much for me.

Poor poor child! Will be motherless!

Who’s asshole is the baby popping out from smh??

Poor child. How confusing for it.

I am going to be sick. Poor baby. Amply demonstrated that children of gay couples on average will have a much higher chance of suicide, having a disfunctional future family, depression, etc https://t.co/67XFSvxQAo

The loved-up pair are apparently due to become fathers. They both shared an ultrasound picture of an unborn baby on their social media profiles. Along with the picture Dustin, 43, captioned it, A very happy #ValentinesDay from ours to yours.” He included the two male and child emoji in the message.

Tom released a photo to coincide with husband’s picture and wished his followers a Happy Valentine’s as well.

The pair were married last year have talked about starting a family.

Speaking on BBC Question Time, Dustin said, “I’m here from the United States of America. I didn’t get to vote on Brexit, because in this country because I fell in love.

“Because I call it home and because I hope to raise a family here.”