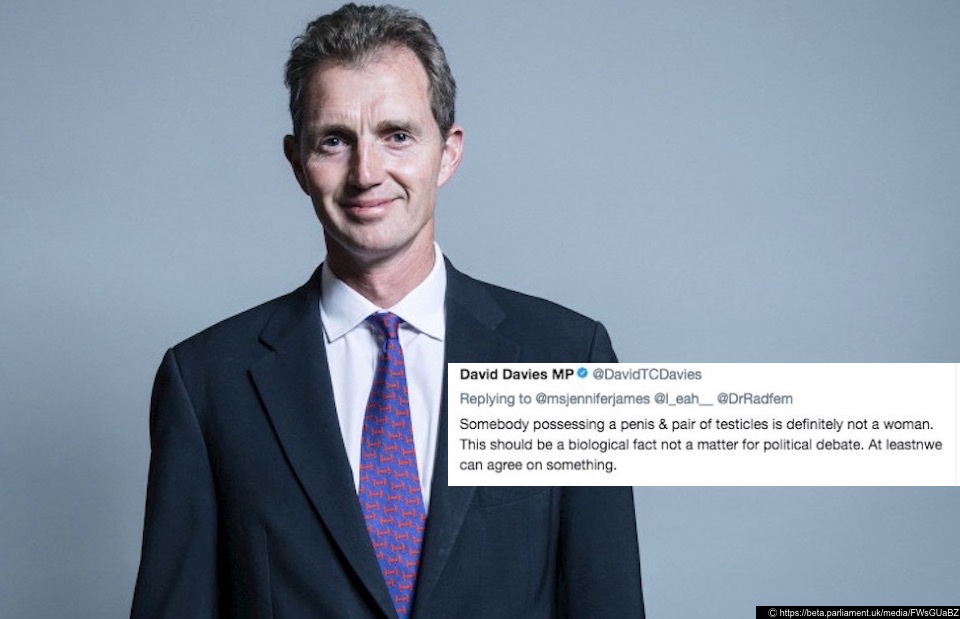 David Davies, the MP for Monmouth has been slammed by trans advocates and his party’s own LGBT+ group for being a transphobe after he Tweeted a shocking message, which suggested that trans women who still have a penis and testicles are not women.

“Somebody possessing a penis & pair of testicles is definitely not a woman. This should be a biological fact not a matter for political debate. At least we can agree on something.”

Somebody possessing a penis & pair of testicles is definitely not a woman. This should be a biological fact not a matter for political debate. At leastnwe can agree on something.

It wasn’t long before the party’s own LGBT+ group, LGBT+ Conservatives, commented, “David TC Davies’ transphobic views are abhorrent and out of kilter with Conservative Party policy.

“It’s clear that the T in his name stands for transphobe. It’s equally clear what the C stands for.”

David Davies has, according to TheyWorkForYou.com, consistently voted against gay rights. During his time in office, he has voted five times against and been absent five times on LGBT+ equality laws. He also voted against same-sex marriage.

The MP went on to Tweet about the abuse that MPs face on social media.

“Abuse on social media is par for the course as an MP – but it’s a sad day when it comes from a group based in the HQ of the party which I have actively supported for over 30 years.”

He then called out the LGBT+ Conservatives for being misogynistic before suggesting that he would report the group for online abuse to the party Chairman, Brandon Lewis.

My “transphobic” view is that having a penis makes you male. You may disagree but implied use of word a “cunt” is abusive & misogynistic. You’re an official Conservative group. We are against social media abuse. I’ll be making official complaint to @BrandonLewis on Monday. pic.twitter.com/A3jj5RyBEF

Targetting the perpetrators of online abuse, cyberbullying and trolling have been in the sights of the Conservatives in recent years. Those found guilty of online maltreatment could face prosecution in England and Wales.