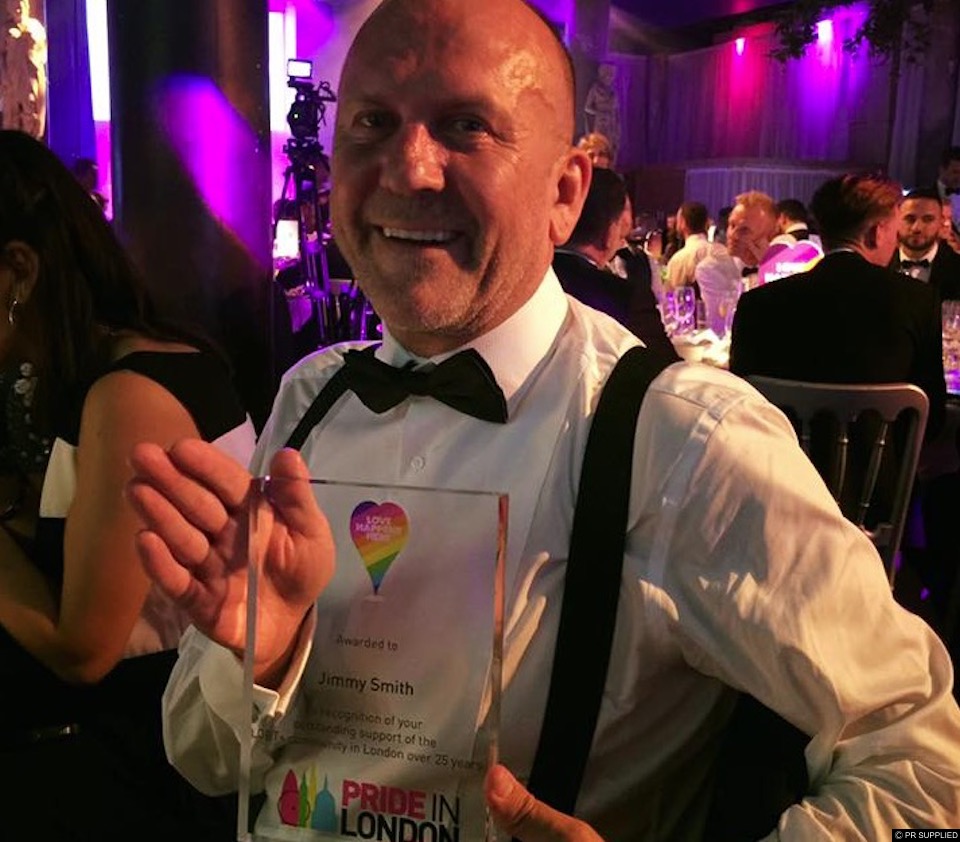 Boss of the Two Brewers in Clapham, Jimmy Smith, has received two of the highest community accolades in recognition of 25 years supporting the LGBT+ community and is up for a 2017 award hat trick adding Great British Best Managed Pub to the honours.

Having managed almost every prestigious LGBT gay cabaret bar over the last three decades with huge community spirit, it was a surprise only to the humble operator himself when he was called out at the Pride annual dinner last week to be commemorated for outstanding support of the LGBT+ community in London over 25 years.

Pride London Co-Chair Michael Salter-Church MBE gave Jimmy the honour just a week after the Mayoress of Lambeth had awarded him the ‘Lambeth Coat of Arms’, on the 25th anniversary day of Jimmy joining current employers Stonegate Pub Company.

“It was the most bizarre experience,” said Jimmy. “I was sat at the event as I do every year, listening to a narrative on this year’s winner and about five minutes in, it dawned on me that they might be talking about me!”

Also recognising Jimmy’s achievements, Stonegate had entered the Two Brewers into the Great British Pub Awards for Best Managed Pub, and last week got the news that they had been shortlisted in the final six with the chance of taking the title after a final round of judging in August.

But it’s not just awarded adding to the insanity. In the last two weeks alone, Jimmy has raised almost £10,000 for Pride London, Grenfell Tower victims and other local charities totalling £25,000 donated this year, with thousands more in previous years.

The support isn’t just fundraising with Jimmy chief organiser and advisor to anyone who asks for his support including the Kings Cross Steelers, founded 1995 as the first ever gay inclusive rugby union club; Best Bar None – last year a winner in recognition for his contribution to a safe late night economy; and London Titans Football Club, one of the biggest and most successful LGBT football teams in the United Kingdom.

If Jimmy does beat all other UK pubs to take Best Managed Pub, the one thing that is guaranteed is dancing in the streets, a huge amount of laughter, and sensational cabaret with every member of the London LGBT+ community celebrating.

The Great British Pub awards will be presented on 7th September at the London Hilton on Park Lane in London.