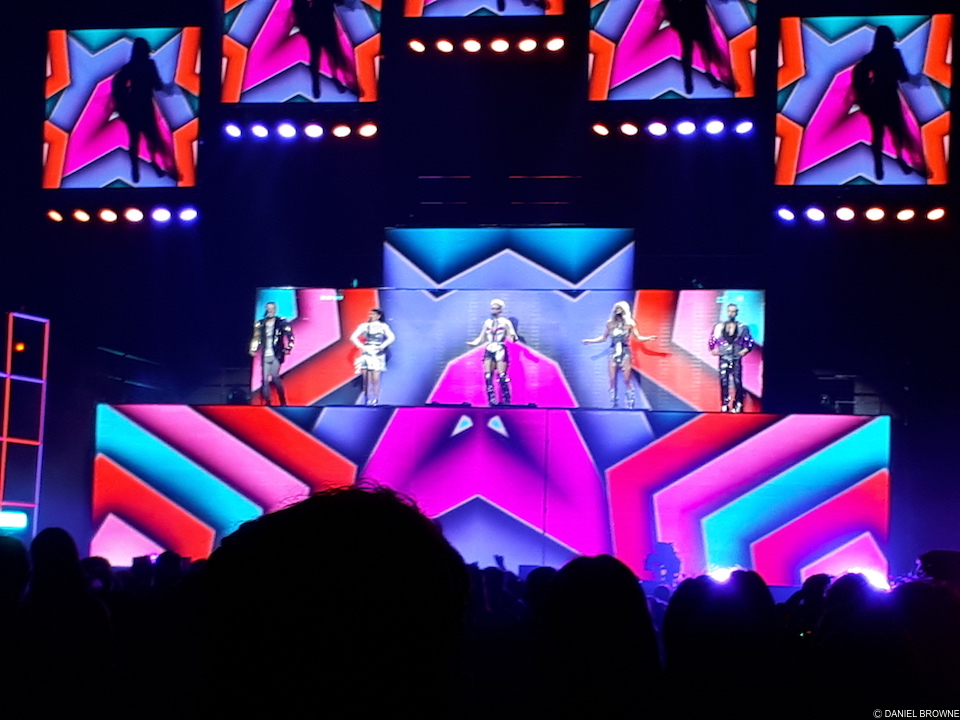 On Friday 1st December, a moment that I had been hoping would happen for twenty years finally arrived… I attended a Steps concert.

Back in the day, as a thirteen-year-old gay boy, I was one of their biggest fans. Sadly, I never got to see them live, so when they reformed and announced a tour, I knew I had to get tickets and join them for a party on the dancefloor.

With the sassiest drag queen in the land, Sassi Afrika, in tow, I sashayed into the arena with high expectations. It was worth the twenty-year wait, as they put on a five-star show, but it was also a great learning experience. Here are ten things I learnt by attending a Steps concert.

They know how to make an entrance

The entrance was terrific and set the tone for the rest of the show. Dancers with red cloaks and golden glitter face masks moved around the stage carrying flame torches. Steps then arrived on stage, with their identities hidden by red cloaks and glitter face masks too. Dancers then pulled off the cloaks, the masks came off, and the band burst into singing their comeback single, “Scared of the Dark”.

They know their audience

Looking around at the crowd gathered at the arena confirmed my suspicions that the audience would be mainly made up of gay men and ladies of a certain age. There were probably more gay men at Steps than were at the Kylie Minogue concert I went to a few years ago. The rest of the audience was mostly people in their 30s and 40s who were big Steps fans two decades ago.

Throughout the show, there were nice references to many of their fans being gay. A male dancer accompanied H. When the backing dancers had their own performance segment, there was a male dance couple and a female dance couple. H was jokingly flirting with one of the male dancers, which was quite entertaining. Finally, at one point in the show the words ‘Love Wins’ was displayed on a screen in rainbow coloured letters. They were all nice touches that gave a nod to their gay fans. It seemed genuine too, rather than contrived.

Who knew? There were heterosexual couples in attendance, and at one point a man got down on one knee and proposed to his girlfriend. Thankfully she said yes. I always thought that concert proposals were a bit cringe and embarrassing, but having seen one with my own eyes, it was actually quite beautiful and added to what was already a great night.

Again, who knew? I had thought that Lee’s main purpose was to provide some eye candy. While he is very handsome, he can also sing. In the early days of Steps, Lee didn’t really have an opportunity to sing. However, on their new album, he has more singing duties. This enabled him to sing solo parts during the concert, and I was surprised by how good his vocals are. They were on a par with everyone else’s. In fact, everyone’s vocals on the night were outstanding.

They throw everything at their live shows

This concert was visually one of the best I have ever been to. The lighting and fantastic set added so much to a brilliant show. The dance routines were spot on and completely in time. The backing dancers were amazing. The audience interaction and previously mentioned nods to their gay fans were really nice touches. It was clear that this is a group who are at the top of their game and happy to show everyone just how good they are. It was a world-class concert.

Vengaboys are a fantastic support act

When Vengaboys burst on to the stage, I was happy to hop on the Vengabus with them. Their one-hour set was full on and packed with high energy dance routines and impressive live vocals. I’d forgotten how many hits Vengaboys had and it was nice to hear them again. One thing puzzled me though. Vengaboys do not appear to have aged a day in twenty years. I need to know their secret.

Steps fans are the friendliest

I’ve been to a lot of concerts, and there is normally an idiot somewhere nearby. So, it was nice to chat with some lovely people at the Steps concert, share dance routines and have a good laugh with them. Complete strangers were talking to each other, dancing with each other, and have a fantastic time. It was nice to see and experience that.

Glitter is a must

I let the side down by not wearing any glitter, devil horns or flashing hat. Much of the audience was dressed up for the gig, and glitter was popular. If I see Steps again, I’m going head to toe in glitter. As the saying goes, when in doubt, add more glitter.

Sassi Afrika is a glorious creature and had been teasing the dance routines. However, nothing prepared me for the show that she put on next to me. From beginning to end, Sassi did every single dance routine, and each move was spot on. If Steps ever need a replacement for Claire, they should give Sassi a call.

Time has been kind to Steps songs

We all know that Steps were known for being a bit cheesy in their heyday. However, time has been very kind to their songs. Each song sounded fantastic and somehow better today than when they were released. The material from their new album is very good and very relevant for today’s market. It’s a Steps sound, but with a mature twist. With such an outstanding back catalogue of classic hits, this was always going to be a great show.