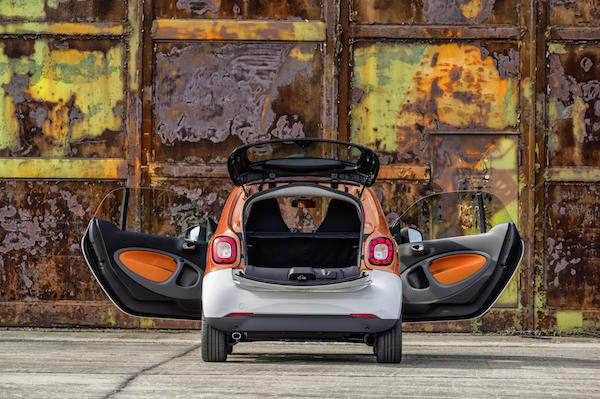 Is the fortwo proxy by smart car any good. We give our experts a go at the tiny car

This is the all new third generation smart fortwo. It may have grown a stubby snout and lost the one box shape of its predecessor but the contrasting ‘tridion’ safety cell and tiny 2.69-meter length scream smart. The big news is under the skin however, gone is the clunky automated manual ‘box having been replaced by a conventional five-speed manual or optional six-speed dual clutch auto.

While Mercedes’ other baby the A-Class may have gone all conventional, the fortwo retains a rear mounted three cylinder engine that powers the back wheels; it’s almost like half a Porsche 911. Length may have stayed the same but width is up by 110mm helping with stability and providing a more spacious cabin.

Compared to its predecessors, the latest fortwo is something of a revelation to drive. Gone is the gearbox’s hesitancy meaning you no longer look (and feel) like a nodding dog as you accelerate. The manual gearbox is nothing special but it’s light, easy to use and no longer a source of constant frustration. Coupled with the most powerful 71hp version of the normally aspirated triple, it’s fine around town although runs out of puff easily on the open road. 0-62 takes an agonising 14.4 seconds while hills will often require a downchange or two especially at speed.

Not helping is super-long gearing (second gear is good for 60mph!) which may be great for economy but kills performance. At least there’s a pleasing three cylinder thrum as the revs rise and smart claims 68.9mpg and 93g/km is possible. In practice the best I saw was a little over 40mpg according to the trip computer but to be fair, I live out in the country which is not the smart’s ideal operating environment. A 900cc turbocharged engine is available boasting 90hp and considerably more torque. This brings the 0-62 time down to around the ten second mark and should prove a much happier companion on A-roads and motorways.

The steering may be variable but always seems a little too light apart from during low speed manoeuvres. It is at least accurate if lacking in feel. The extra width adds welcome stability on the motorway although does make it feel less wieldy around town. Decide to corner the smart hard and you are greeted with overprotective intervention from the electronics followed by plenty of understeer. Only over particularly bad bumps does the smart ever feel unsettled; something you can’t escape given the short wheelbase. The upshot is a tiny turning circle of just 6.95 meters.

Ignoring the miniscule boot, space inside is generous and gives the impression that you’re in a much larger car (until you look in the rear view mirror). Interestingly, the dashboard is upholstered in a mesh fabric giving the nicely sculpted interior a distinctive look. Quite how you’d clean it after a coffee spillage is something I don’t even want to think about though.

The optional seven-inch touchscreen proved simple to navigate, easy on the eye and responsive. Start to explore the furthest reaches of the dash and you do find questionable plastics although they are well hidden for the most part. There’s no doubt the smart’s cabin feels very contemporary and is a great place to spend time. It’s also really airy thanks to the white trim and panoramic roof that comes with the proxy model.

To summarise, if we’re being sensible nearly £14,000 is a lot of money for a car that lacks the practicality of many of its rivals costing considerably less. If you don’t need four seats (or have a second car that does) then there’s no doubting the smart’s effectiveness in the city. Given that it’s now tolerable, even dare I say it fun to drive at times, it’s certainly much easier to recommend than either of its predecessors. Combine this with a great interior and bold exterior styling and you have a seriously appealing city car.

Not enough grunt for motorways