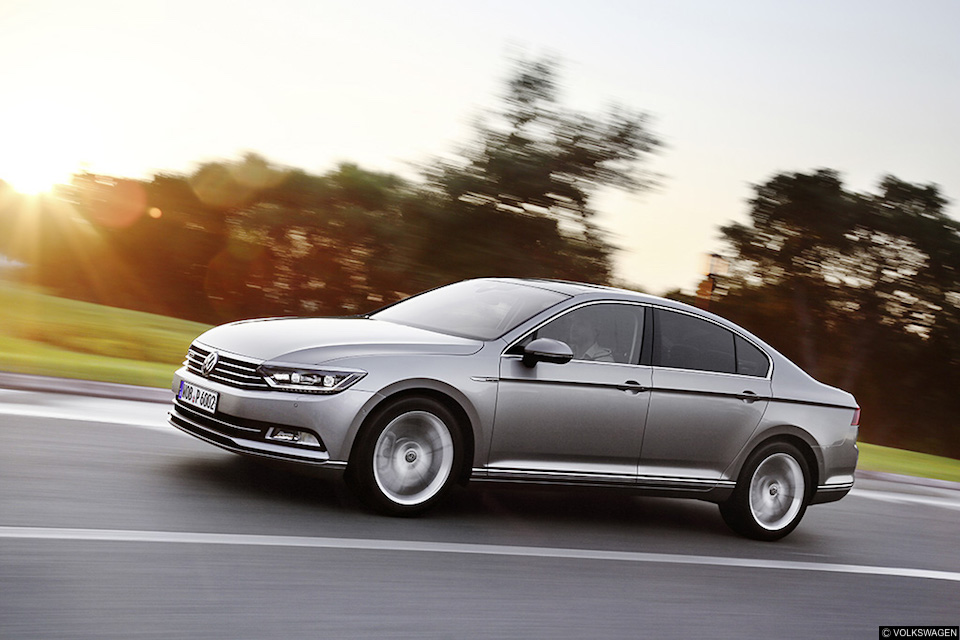 The VW Passat is a good car.

You can’t fault it really. From its rusty ashes as the 1968 411, it has grown and with Audi’s influence, VW’s people’s car for the executive has become a staple for the rep about the motorway service area who wants a quieter life than the four roundel sister cars.

And that ladies and gentlemen is the Passat’s problem. It’s too quiet and yet its family timeline to start with was anything but.

Volkswagen CEO Kurt Lotz, from 1968 – 71, had a bit of a task ahead of him. His greatest success was the purchase of NSU along with its water cooling experience. Wheels were in motion for VW’s greatest change. It’s safe to say Lotz would have been proud of the Passat today and as an owner, you would be too.

The GT we tested, left you wanting for nothing. It had all the toys you could wish for. The meagre money VW charges for it (£29,000 starting price), it is a lot of car for your pound. Add the essentials and it soon adds up but the end result is still a great value car. There wasn’t one moment when I wished for more. Actually, I did and I’ll get to that if I haven’t convinced myself that I don’t want it by the time I am finished.

For a start, the petrol engine is quite simply an amazing power unit. It’s by far not the most powerful in the Passat range. The 180ps 1.8 was subtle in the way it delivered the power. While the engine gets into its gallop between 5100 – 6200 rpm with the 236 Ibs ft of torque that kicks in across the 1450 – 3500 rpm rev range. It gets going with a lovely subdued growl. Like drinking the smoothest Baileys with a dollop of extra cream followed by an intense espresso.

The compliant ride adds to this fluid quality feel that you have come to expect from Volkswagen. It smoothed out almost all surfaces and road roar was limited to a mild hum.

The driving experience of the Passat was always a joy and never a chore. Even with the manual gearbox, it didn’t feel like I was being put out because I had a third pedal to press. Clutch controls were nicely weighted to the other controls. VW spend a lot of time on this and they get it right.

It all sounds quite lovely. You can though, push Passat if you’re feeling a little asphalt frisky. the handling is safe and visibility is good. It glides around fast S bends and will mildly understeer if you push it beyond the capabilities of the tyres. Traction kicks in and restores your faith. It’s safe fun. Yet look at its performance figures and you’ll see it’s no slow coach.

A 0-62mph time of 7.7 seconds isn’t too shabby and I’ve no doubt that it will eventually get to the claimed top speed of 144mph.

It’s just that when it does, you’ll have no idea you are going that fast until you see the blues and twos coming up behind you.

Interior quality is second to none. As much as Volkswagen is a premium brand, you have to remember that this isn’t the premium brand from VAG. That is Audi’s job and yet apart from a little too much black around the inside and not enough glitz to break it up, it was well and truly above par.

VW’s sale figures for the Passat astonished me. Despite the Passat being in a small yet aggressive market, there wasn’t as many sold as I thought and yet you see so many on the roads. One wonders if BMW, Mercedes and Audi drivers looked at the values of the Passat that more would be sold. That said for the out and out performance car, it isn’t quite what the Passat image is about despite there being a Passat R.

The dashboard layout benefits from the new system being adopted by VW that has moved the goal posts yet again. Being adaptive in its information allows you to get the best from the car and its calming qualities that all add up to make Passat a nice place to be in. And to make sure you are never late, VW has included three clocks up front. Why? I do not know. Two digital and an analogue one in the centre of the dashboard. I am surprised they haven’t added one in the rear.

With regards to the toys, the Passat is packed with them. The adaptive cruise which I like to see and lane assist. Volkswagen’s system doesn’t cut power off immediately when it notices the driver is going autonomous. It does figure out quite quickly that you are not putting in manual inputs. The alarm sounds to alert you to take control. If you insist on ignoring this, it briefly and yet not dangerously life-threatening to those driving behind you, jabs on the brakes for a split second. It’s most unpleasant. You then tend to not do that again

It all adds up to a nice car. A car for all reasons. You could adorn it with ribbons and use it as a wedding limousine. The bride and groom wouldn’t think you had turned up in a repster mobile. The bride wouldn’t kick off. There would be no drama. And that’s the problem I have. There is simply no drama with the Passat. It’s not like there isn’t room for a drama button on the centre console amongst the blanks on this model.

For £3k more the 2.0-litre models may well give you this but then you lose the sense of great value for what is a very nice car. And only three stars I know seems harsh. It just needs to kick you in the teeth! Sadly for Passat, when you park it up you can walk away, mind rested and soul intact. You’ve arrived.