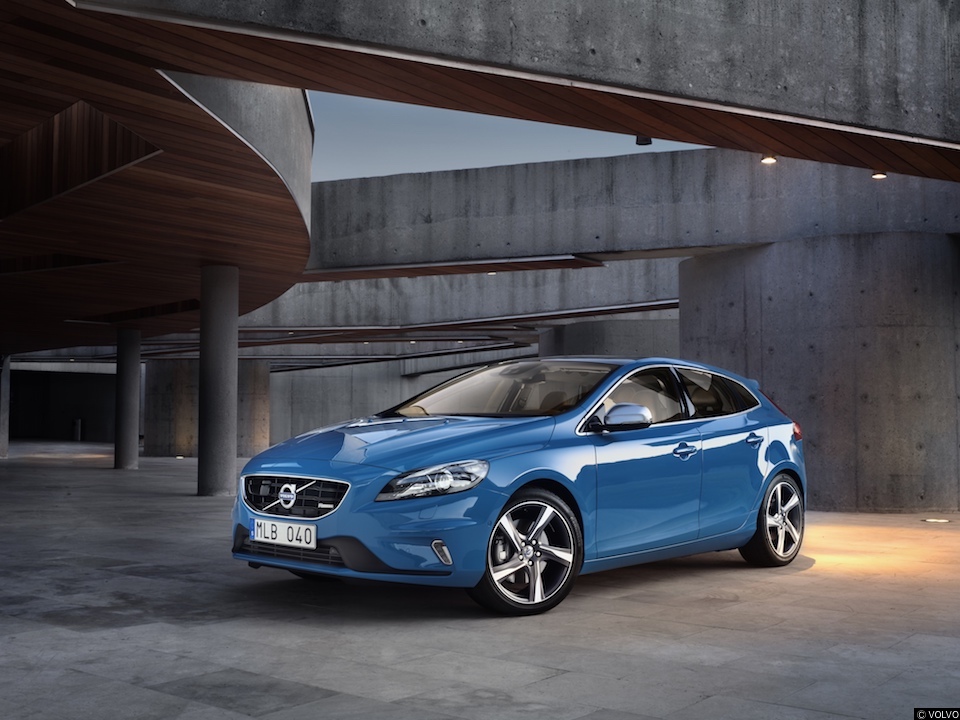 Your Personal Volvo Has Arrived.  And it’s almost autonomous!

I took delivery of Volvo’s latest V40 R-Design Lux Nav and immediately liked what l was seeing. And then I wasn’t. For a V range model it wasn’t exactly versatile in load carrying space if you like to load the boot to the gunnels with flat pack furniture from Sweden’s best export company. The opening is too shallow in height for what is sold as an estate. Add to this the rear seats’ quick folding system with neat folding rear head restraints it still didn’t make the boot as big as you’d expect from Volvo. For those who love a Jack Russell the boot it’s perfect but don’t try and carry a greyhound. It all added up to a boot that was ok but not deep enough in height. Sometimes l feel Volvo should have introduced an H range for hatchback.

On the road the 1.6 litre turbo is a wonder of smoothness and refinement. For the size of the engine it boasts a modest sounding 120 bhp but the lowdown torque of 280NM available from 1500 to 2250RPM makes driving a breeze. Either way for a lazy driver like l am most of the time or spirited when you need to be, it will satisfy all but the most ardent of boy racers out there. Trouble is the car likes to keep itself at 1500RPM. Not bad l suppose if you like economy but l found keeping it at 2000RPM made for a much better car with power more on tap when you needed extra oomph. This also added another problem to my 21-years of driving. Around town only the first 4 gears were needed. So high is 4th that 5th leaves you with gutless performance and 6th was a no go zone. On the open stretches 5th and 6th were acceptable but 6th was just too tall for use with the two cruise control systems unless you were going very fast.

That’s right reader l did say two. One keeps you at the set speed regardless of how far the accelerator is pressed which is ideal on the motorways with cameras almost every 200 yards, while the other is called Adaptive Cruise Control (ACC). This fabulous system keeps you at a set distance and applies the brakes to slow you down if the car in front slows for any reason, returning to the set speed when it can. As naughty as it sounds it was brilliant in the fog keeping me at a safe distance from the car infant even when l struggled to see it clearly.

The mere mention of the word Volvo and you instantly think of safety and acronyms. And there are plenty to be had because the V40 is buzzing like a rampant rabbit and all of its seven settings.

Along with the aforementioned ACC, there is also DAC (Driver Alert Control) CTA (Cross Traffic Alert) and BLIS (Blind Spot Info System) At first the BLIS system annoyed , however, ts alert did prove handy for when cyclists would come up around you in traffic or motorbikes when on the move. Sadly the passenger’s side alert light was too far out of my peripheral vision. l didn’t quite have the balls to try out the full auto brake system but it did activate when a bus pulled out in front of me on a roundabout.

It’s disconcerting at first and makes you wonder what else Volvo could do to better this? Well let us look at “lane assist”. It’s a great idea in principle but it does need further work if it is to save lives. While l understand that it is there as a secondary assist system it does get confused when the lines are not clear. When the lines are clearly picked up by the system, it will actively steer the car for you. The autonomous car is almost here!

My daily commute of 40 miles, taking in some rough country roads, fast A roads and twisting hairpins did nothing to shake the fillings out of my teeth. You couldn’t say the ride was a compromise between sporty or soft because it soothed out the ruts where needed without sending jarring motions through the seat all whilst retaining total composure in the corners. For an everyday car that has to be everything from entertaining to drive to keeping the eggs needed for the soufflé in one piece I’d find it hard to beat. The V40 does handle well. Doing what it needs to, the electronic stability program feels all very non-health and safety or Volvo like for that matter. The ESP doing what it has to without causing a fuss or alerting you to its presence.

The wellbeing promoted in the cabin is further enhanced by the ambient mood lighting. There were so many choices you get bored after a while trying to find the right one. It has all the colours of the rainbow! For me the eco facia theme and green ambient lights were to my liking giving it a touch of Avantgarde class and a sense of calmness.

For decades Volvo have always sat just outside the mainstream in the various sectors they enter but the time has come for buyers to look across to Sweden because there is now a real contender to challenge the might of the Golf. At the end of my time with the V40 l still liked it and liked it a lot.

Its relaxed driving environment promotes calmness that only citalopram can give you in today’s fast paced, high drama, must have it all now now now world that we live in. You wouldn’t mention the V40 in a Facebook status but given the option you would click a “like” for it.

All this gushing has to have a down side, there were a few things l didn’t like. Save yourself £600 by not opting for the leather and all its trimmings. Personally it didn’t feel that great to the touch and had the look and felt of vinyl. And then there was the exposed front seat mounting bolts. This might sound a bit petty, however in a car costing as much as this and with the attention to detail that Volvo have lavished on its smallest offering, it is a tremendous let down. And then there was having to give it back. Now that was a sad day.