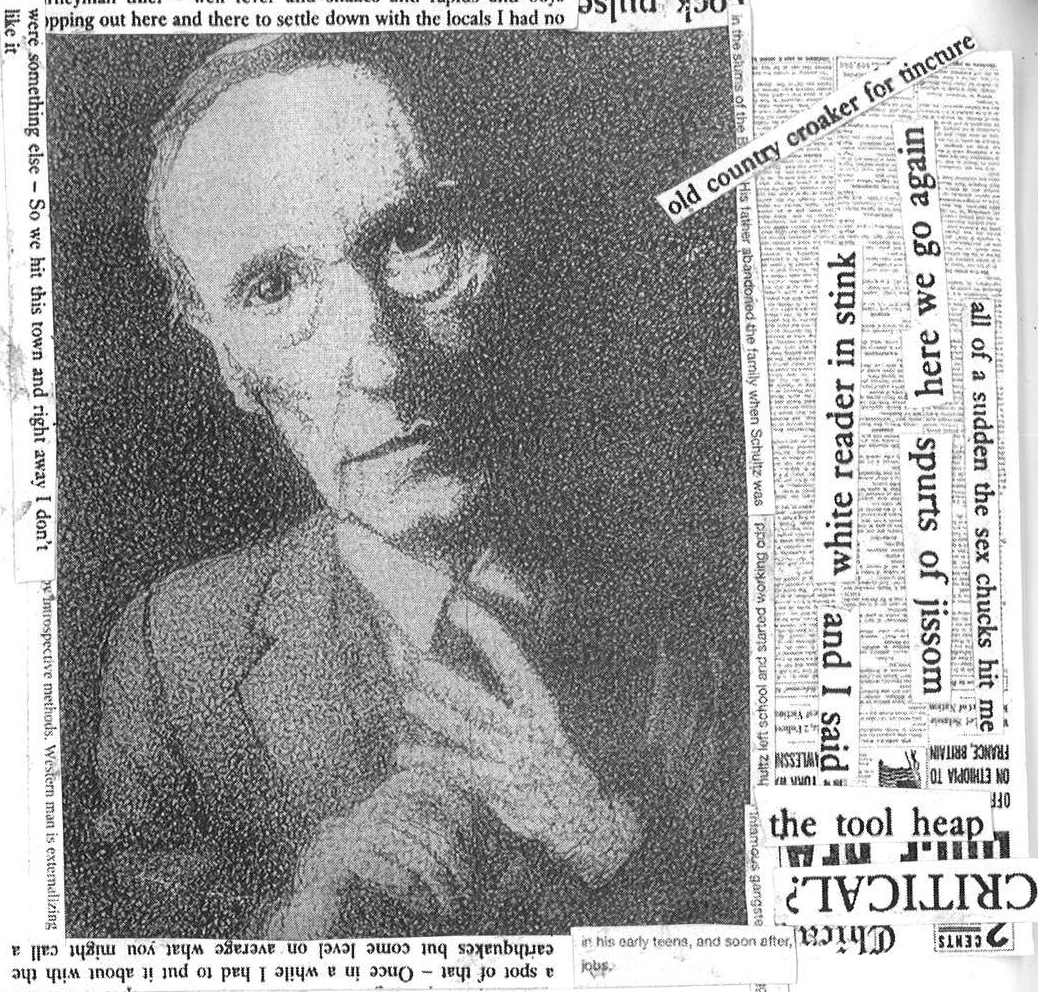 It was summer 1991, I think, when sharing a joint on a brick fire escape after a night of acid-tapped cartoon lunacy, my friend Steve exhaled smoke into the Manchester morning and casually asked if I’d heard of a writer called William Burroughs.

I hadn’t, but that moment has stayed with me as the dawn of what was to become a deep and unremitting love for the man J.G. Ballard called “True genius and first mythographer of the mid-twentieth century”. Steve passed the joint and disappeared indoors – momentarily leaving me staring, rabbit-eyed, into the headlights of reality – before returning with a tatty, nicotine-thumbed paperback. “Read this,” he said, thrusting the book at me. “You’ll love it.”

Naked Lunch: odd title, I thought, flipping the book from cover to blurb to cover again. What is this, some kind of naturists’ cookbook? I turned to the introduction and read:

“I awoke from The Sickness at the age of forty-five, calm and sane, and in reasonably good health except for a weakened liver and the look of borrowed flesh common to all who survive The Sickness … Most survivors do not remember the delirium in detail. I apparently took detailed notes on sickness and delirium. I have no precise memory of writing the notes which have now been published under the title Naked Lunch. The title was suggested by Jack Kerouac. I did not understand what the title meant until my recent recovery. The title means exactly what the words say: NAKED Lunch – a frozen moment when everyone sees what is on the end of every fork.”

“What the fuck is this?” I said, burnt synapses trying hard to connect. Steve smiled, sane as he could muster. “Read it,” he repeated, snatching the joint from me. “You’ll love it.”

William Seward Burroughs II (1914-1997) – a Harvard man: junkie, queer, outlaw, writer. The Priest, they called him, El Hombre Invisible, Old Bull Lee. His books have been praised as radical satire, pilloried as pornographic, appropriated by other gods for their own sybaritic sermons. His ideas, language and imagery have infiltrated popular culture through his influence and collaborations in literature, film, music and art. David Bowie, Anthony Burgess, David Cronenberg, Patti Smith… so many have paid tribute to the Burroughs method.

This stuff was written in the 50s, for Christ’s sake, how the hell did they get it past the censor? Truth is they didn’t – not at first. After it was finally published in the US, Naked Lunch was put on trial for obscenity. But that was way back in Boston in 65, and anyhoo…

After Naked Lunch, I devoured just about everything by or about Burroughs I could lay my fevered mind on: slid through the early confessional narratives of Junkie and Queer; waded knee-deep in the experimental cut-ups of the Soft Machine/Ticket that Exploded/Nova Express trilogy (notebooks, Bill, put ‘em away for later); masturbated to the lyrical alien sex of The Wild Boys; marvelled at the malarial masterpiece Cities of the Red Night; and absorbed, agog, Ted Morgan’s seminal biography Literary Outlaw.

Here was a man whose life jumped from the page every bit as unconventional and dangerous and as funny as anything he had written. His life and his art weren’t just intertwined, as with most writers, they were conjoined twins pickled in apomorphine. The lifelong on/off heroin addiction, the accidental killing of his wife during a drunken party trick in Mexico, the subsequent exile in Tangiers, Paris and London…  JUNK SICK routines and vacant lot scenes of CONTROL, parasitic possession and WORD as VIRUS appear again and again, in ever evolving mutations, across the body of his life and work.

Not for Burroughs the easy journey of write what you know. “In my writing I am acting as a map maker, an explorer of psychic areas… a cosmonaut of inner space, and I see no point in exploring areas that have already been explored,” he once said. For this guy, words were the beginning not the end of writing, and he illustrated this in his endless, sometimes exasperating experiments with just how far, and in what forms, language can go.

I didn’t truly understand the power of Burroughs’ words until I first heard his voice: that St Louis drawl – the cracked mumblings – the gnarled fingers talk of a prophet with no easy message. When I first heard him speak, it was on a flickering, badly recorded video – The Final Academy Documents – of a reading he gave from The Place of Dead Roads at Manchester’s Hacienda club in 1982. This was a double whammy for me. The Hacienda was my club of choice in the early 90s, and when I learnt Bill once graced that piercing-cold warehouse with his presence, suddenly I didn’t feel so frozen on the dance floor. And that voice – oh, that voice – crackling from the past – had me fixed to the spot; grinning homunculus in the palm of a bony hand.

Burroughs came to see his work both as a search for immortality (figuratively and literally) and as an attempt to exorcise the ‘Ugly Spirit’ he believed had possessed him and caused the death of his wife when he shot her through the forehead. He later admitted in the introduction to Queer (written in 1951but not published until 1985): “I am forced to the appalling conclusion that I would never have become a writer but for Joan’s death, and to a realization of the extent to which this event has motivated and formulated my writing. I live with the constant threat of possession, from Control. So the death of Joan brought me in contact with the invader, the Ugly Spirit, and manoeuvred me into a lifelong struggle, in which I have had no choice except to write my way out.”

To focus only on the profoundly wretched aspects of Burroughs’ life, however, is to miss much of a writer who was also an arch humorist, with a switchblade wit that could cut through bone. The man could be wildly funny, and if you find that hard to believe, read Twilight’s Last Gleamings, where Doctor Benway (one of Burroughs’ most popular and recurring characters) drunkenly operates on a patient on a sinking ship; or Roosevelt After Inauguration, where the incumbent president celebrates his victory by forcing the Supreme Court to have sex with a baboon. And if you don’t fall about laughing then seek medical attention, for it is my diagnosis that you are dead already.

For my money, Burroughs’ acerbic wit was put to best use when he turned his ire on evils perpetrated by the big three: religion, government and big business. After all, this was the man who lashed out at the shits of the world with The Last Words of Hassan I Sabbah in 1981:

“Listen to my last words, anywhere!
Listen all you boards, governments, syndicates, nations of the world,
And you, powers behind what filth deals consummated in what lavatories,
To take what is not yours,
To sell out your sons forever! To sell the ground from unborn feet forever? For Eve-R
Listen to my last words, any world! Listen if you value the bodies
for which you would sell all souls forever!
I bear no sick words junk words love words forgive words from Jesus
I have not come to explain or tidy up
What am I doing over here with the workers, the gooks, the apes, the dogs, the errand boys, the human animals?
Why don’t I come over with the board, and drink Coca-Cola and make it?”

Those words resonate today as powerful and as prescient as they ever were. It would be fascinating to hear what Burroughs would have to say about the ills of today, to see what he’d make of Trump in The Whitehouse (baboon, anyone?), of a planet going to hell in a religious handcart, of a population more and more willing to sacrifice their personal freedoms and inalienable human rights to social media.

It would be fascinating to know if he felt the weight of being right when he wrote “the blood, and bones, and brains of a hundred million more or less… went down the drain in green piss! So you on the boards could use bodies, and minds, and souls that were not yours, are not yours, and never will be yours… These words are not premature, these words maybe too late.”

It is twenty years since William Seward Burroughs died from complications following a heart attack at 6:50 p.m. August 2, 1997.

Feels like yesterday. But for a writer who was rarely linear, time passes in both directions. His last words were reportedly a quote from his long-term friend and collaborator, the artist Brion Gysin: “Back in no time.” Three days before, Burroughs wrote in his final journal entry: “Thinking is not enough. Nothing is. There is no final enough of wisdom, experience – any fucking thing. No Holy Grail, No Final Satori, no final solution. Just conflict. Only thing can resolve conflict is love, like I felt for Fletch and Ruski, Spooner and Calico [his cats]. Pure love.”

I agree with the latter part.

Leon Horton is a cultural journalist and humorist. After gaining his masters from the University of Salford, he lost the will to live working as a court reporter (wouldn’t you?), drank himself into a corner writing upbeat “isn’t everything marvellous” crap for advertising magazines, and enjoyed a failed stint as the editor of Old Trafford News. His writing has been described as “not quite what we’re looking for” and is published by Beat Scene, International Times, Beatdom, Literary Heist, Empty Mirror and Erotic Review. In January 2019, he became a member of the European Beat Studies Network. When he’s not barking at the moon or up the wrong trouser leg, Leon can be found blogging Under the Counterculture at Https://www.leonhorton.wordpress.com