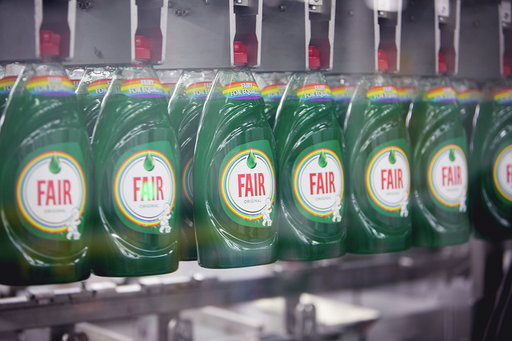 One of the UK's most traditional brands, Fairy washing up liquid is about to donate a huge 50K to the Albert Kennedy Trust with the launch of a limited edition product.

One of the UK’s most traditional brands, Fairy washing up liquid is about to donate a huge 50K to the Albert Kennedy Trust with the launch of a limited edition product.

Fairy is coming out in support of the LGBT+ community by promising to donate £50,000 to the Albert Kennedy Trust, the LGBT+ homelessness charity with the launch of its limited edition FAIR range.

This comes as the brand publishes The FAIR Report which looks at the attitudes and perceptions of British parents and finds that, while things have come a long way in Britain since Fairy launched in the 1950s, there is still a long way to go for all families to enjoy equality. Key findings include:

While some stats from the report were promising, others showed there is still work to be done:

The research, conducted amongst 2,000 British parents during May 2019, shows that, while we’ve come a long way, there is room for family life to be more FAIR today. For this reason, FAIRY is donating £50k to the charity akt to help progress equality for members of the LGBT+ community and help them find a supportive family unit.

According to the research, a third (32%) of British parents say, within their family, they find it difficult to find the right moment to talk about sensitive issues. And whilst over half (59%) believe they talk with their children openly and positively about LGBT+ issues, a quarter of those surveyed (25%) did not.

“FAIRY has been a presence beside British kitchen sinks for over 70 years – if a bottle of FAIR can help families find a moment to talk openly and positively about LGBTQI+ issues, that will really help shift perceptions and drive equity for all family members, everywhere,” said Tim Sigsworth, CEO of akt.

“Fairy’s donation will help akt develop innovative responses to ensure parents, caregivers and siblings are better informed and supported – increasing the possibility that young people will continue to enjoy a supportive and loving family life, after they come out.”

“Whilst there has been huge progress in equality in the UK, there’s still room for greater fairness.  In partnership with akt, our FAIR campaign recognises and celebrates the diversity in family life today” said Tom Moody, Vice President & General Manager, P&G Northern Europe

“When people chose a limited edition FAIR bottle and place it by their sink at home, they’ll be supporting a fabulous cause and our vision to create a world free from bias where everyone is free to be themselves” he continued.

Fairy has created ‘The Fairy FAIR film’ with campaign ambassador, Duncan James and akt to accompany the report. Commenting on it, Duncan said, “I count myself so lucky that my Mum and grandparents have been so loving and supportive over the years.

“We have come such a long way but The FAIR Report highlights that there are still so many members of the LGBTQ+ community who struggle to have a happy family life. I would encourage families – next time you’re having a cup of tea or doing the washing up, have a chat and let each other know, we’re all equal no matter who we love or who loves us.”

The limited edition FAIR range will be available from leading retailers from July 2019. A donation of £50,000 will go to akt.