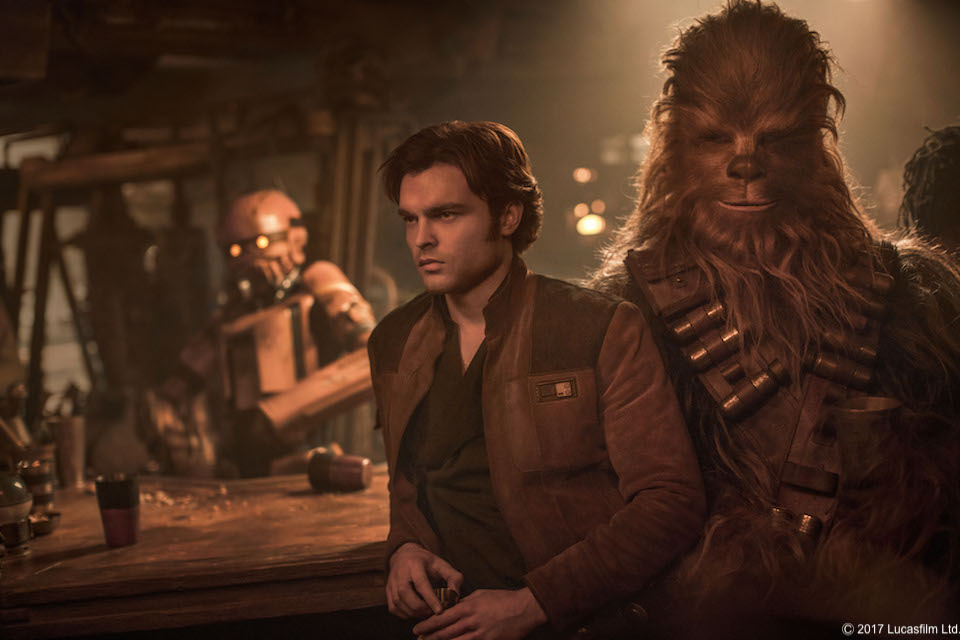 The second standalone film loosely around the edges of the ongoing 8-movie main space saga. This time we get Han Solo's origin story, how he met Chewbacca and got his hands on that famous spaceship.

SOLO: A STAR WARS STORY – The second standalone film loosely around the edges of the ongoing 8-movie main space saga. This time we get Han Solo’s origin story, how he met Chewbacca and got his hands on that famous spaceship.

Nutshell – A young Han Solo is a street criminal who gets involved with a major heist which goes wrong leading into some dramatic twists and some even greater high adventure across many planets as he meets Lando Calrissian, Chewie, the Millennium Falcon & others in a boys own tale way before the rebellion and all we know in the Star War’s universe, so why is it the poorest yet?

Tagline – ‘Never Tell Him The Odds’.

The Gay UK Factor – The relatively unknown Alden Ehrenreich best known for a minor part in the Coen Brothers’ Hail Caeser takes over the Han Solo role made famous by Harrison Ford in an interpretation rather than an impression of the great man. He is a good looking lad in a sexy ‘Years & Years’ type bend over and suck chavvy way but he is much better to look at and fantasize over than watch as his acting is boring and he wrecks what should have been a great Indiana Jones in space type yarn, but he does look fit and fuckable throughout.

Key Player – Ron Howard formally of the Happy Days TV show is a great director especially with cerebral fodder like Apollo 13 & the Da Vinci Code series but he is not good at action as we see with the likes of Willow, Backdraft and InThe Heart Of the Sea. Therefore why he was picked for this and accepted we will never know. He tries his best but this was never going to be more than a three-star movie and worse, the writing and casting departments are even bigger fuck up merchants here.

Budget – $300 Million which is a hefty price tag. It will be the first Star Wars in history to lose money in North America and this franchise does not travel as well as say the Fast & Furious/Transformers & Superhero films do. Therefore a disappointment all around and lessons need to be learnt.

Best Bit – 0.43 mins; The first heist which is the much-telegraphed roller coaster type train sequence as seen on the posters and trailers works well. It’s exciting and you have no idea what is going to happen next – There is a world war 2 feel to it a bit but the Expendables did this sort of thing a lot better.

Worst Bit – 1.46 mins; After the final big action sequence we get a prolonged confusing twist heavy epilogue over who has been screwing over who but frankly you won’t care. It is a real bugger’s muddle (whatever that is – probably one of our editor’s sex parties); there is one saving grace by the sudden unexpected appearance of an unadvertised much-loved character from the earlier films but soon you are back to the sodden screwy dialogue like the Handmaid’s Tail with dicks.

Little Secret – We finally get to find out what Chewbacca’s age is – he is 190 yo which means he is 200 for a New Hope and then through all the other Star Wars films he ages to 234 yo in the Last Jedi so now we have an accurate timeline to the saga. Ron Howard was brought on to direct after the original duo of Lord and Miller had been dismissed for ‘Creative Differences’ i.e. the film was not working. It is estimated that Howard shot 80% of the final film but which scenes no-one is letting on, this film was problematic throughout like a straight guy giving his first blowjob.

Further Viewing – Star Wars 1 through 9 obviously, Indiana Jones 1 to 4, Romancing The Stone, Von Ryan’s Express, Battlestar Galactica, Thor Ragnarok and anything heisty like say Ocean’s 11 or The Inside Man.

Any Good – This is a three-star movie and there is nothing bad about it or particularly good either. The problem is that is just not good enough for a Star Wars film. It will be the least financially successful and the poorest reviewed of the saga and it will disappoint fans Worldwide. So what went wrong – to soon after the last one (just 5 months from The Last Jedi), poor casting, wrong director, confused ending probably tied by potential & now unwanted sequels and the existing story arcs of the characters in the original films and on top of that an appalling release schedule squashed between the superior Deadpool 2, Avengers Infinity War and Jurassic World hits. A flop all around that could have been avoided like trying to give your partner the shag of his life after 8 pints….points for effort but overall unsatisfactory and your glad when the floppy thing has run its course.

Have you seen this yet? What did you think? #HansSolo pic.twitter.com/sEK2o4a18k