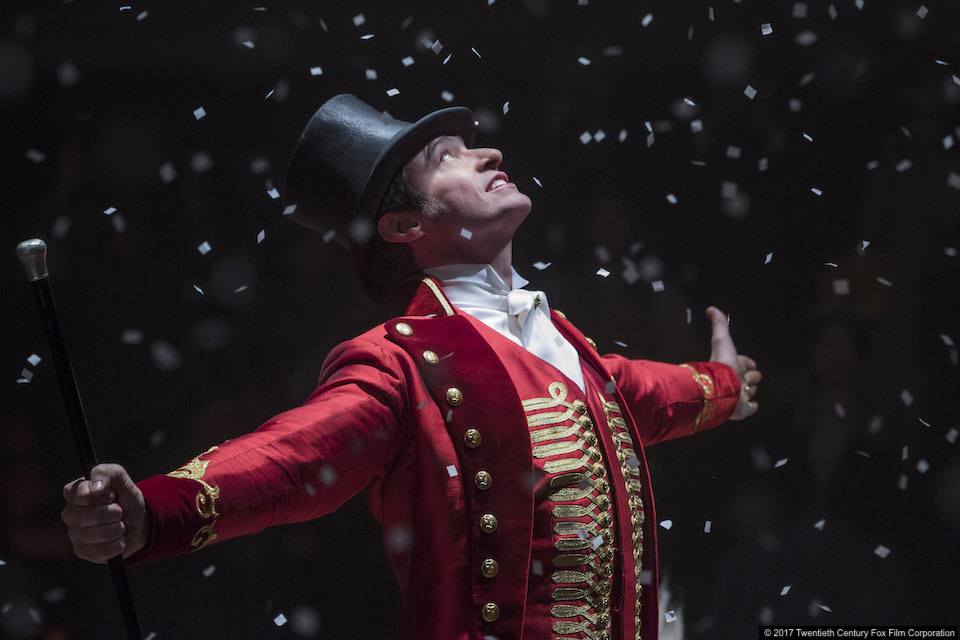 THE GREATEST SHOWMAN – The already award-winning musical of the original showman PT Barnum celebrating the birth of show business itself with all original songs including the best new gay anthem in 30 years… and it is now climbing up the pop charts.

Nutshell – The greatest entertainer of all time in a classic rags to riches story of how he discovered that ‘freakshows’ and different people were of interest to the paying public if presented with fantasy and imagination and how he gave them all respectability. It goes from bankruptcy to the most famous three-ring circus shows of all time in Victorian era New York. With 11 songs that will be new to your ears which is unusual in this Mamma Mia, Chicago, Disney Musical era but many of them soon grow on you especially the big set piece ones. The movie Hugh Jackman has waited his whole life to make.

Tagline – ‘From The Writers and Producers Of La La Land‘.

THEGAYUK Factor – Well it is a musical to start with and visually spectacular a la Moulin Rouge and this is about outsiders with public taste campaigning against them like black trapeze artists, midgets and bearded ladies with a good-looking penniless orphaned hero. It all comes together in the incredible new gay anthem “This Is Me” which will replace “I Am What I Am” from La Cage Aux Follie as the ultimate gay anthem from a musical in no short space of time. This movie is as gay as Kylie in drag belting out “It’s Raining Men” as she enters the Big Brother house.

Key Player – The three men here Justin Paul, Benj Pasek  who together wrote all the numbers and Jackman who carries most of them off with aplomb. There is not really a bad tune here and all 11 have now entered the pop charts with the gay anthem getting the highest spot straight in the Top Ten even before it started picking up awards.

Budget – $84 Million but it looks a lot more expensive maybe some good CGI. Brokeven in seven days and like all musicals, it tends to find its real home on DVD and TV with repeat viewings – this is the first money spinner of the New Year.

Best Bit – 0.59 mins; The big set piece showstopping number “This Is Me” which has already won The Golden Globe for Song Of The Year and will now be the surefire Oscar winner in a few weeks time. The film’s misfits belt out these great gay-friendly lyrics and boy does it build, as Alex Zane announced on Sky it is the first key change ever that made him weep. Download this song now before every drag queen in the land gets their hands on it.

Worst Bit – 0.05 mins: There is a lot to get through here and this leads to a slightly rushed finish and more annoyingly a mega rushed jerky beginning which simply does not engage. The rest is pure heaven.

Little Secret – Barnum’s American Museum was so popular that crowds stayed too long and he could not squeeze new paying punters in so he tricked them with signs saying “This way to the Egress” which the audience thought was a new attraction not realising it means exit until they found themselves outside on the street. In January 2017, the Ringling Brothers and Barnum & Bailey Circus announced that their doors were closing forever, due to decreased attendance and protests by animal rights activists. Their last shows were in May 2017 they did not last to see the opening of this movie.

Any Good – The Golden Globe and now the BAFTA nominations don’t lie this is a great piece of film and a labour of love for the main star. Will the songs become evergreen favourites? Well, we hope so and they are a lot better than the 11 dirges in La La Land. If it starts picking up Oscars watch that soundtrack sell big time as already it is beating Sam Smith and Ed Sheeran. Jackman is ace and Efron learned his singing craft down at the High School Musical so you are in good hands here. If you like musicals this is a great addition and you don’t get many nowadays if not then stick with The Darkest Hour, Jumanji or Star Wars who will all happily take your money off ya instead.